Rice-Eccles Through the Years: A History of Hosting Big Events

Did you know that Rice-Eccles Stadium only took 10 months to build? Or how about that the RES sandstone towers (the sandstone was imported from India) that overlook the Salt Lake Valley were built by pouring concrete for seven straight days consecutively without a break?

Rice-Eccles Stadium is an impressive venue, to say the least, especially at the collegiate level. The stadium that has been host to so many events, mainly Utah football games, is one of the more modern stadiums in the nation, according to stadium director Mark Burk. 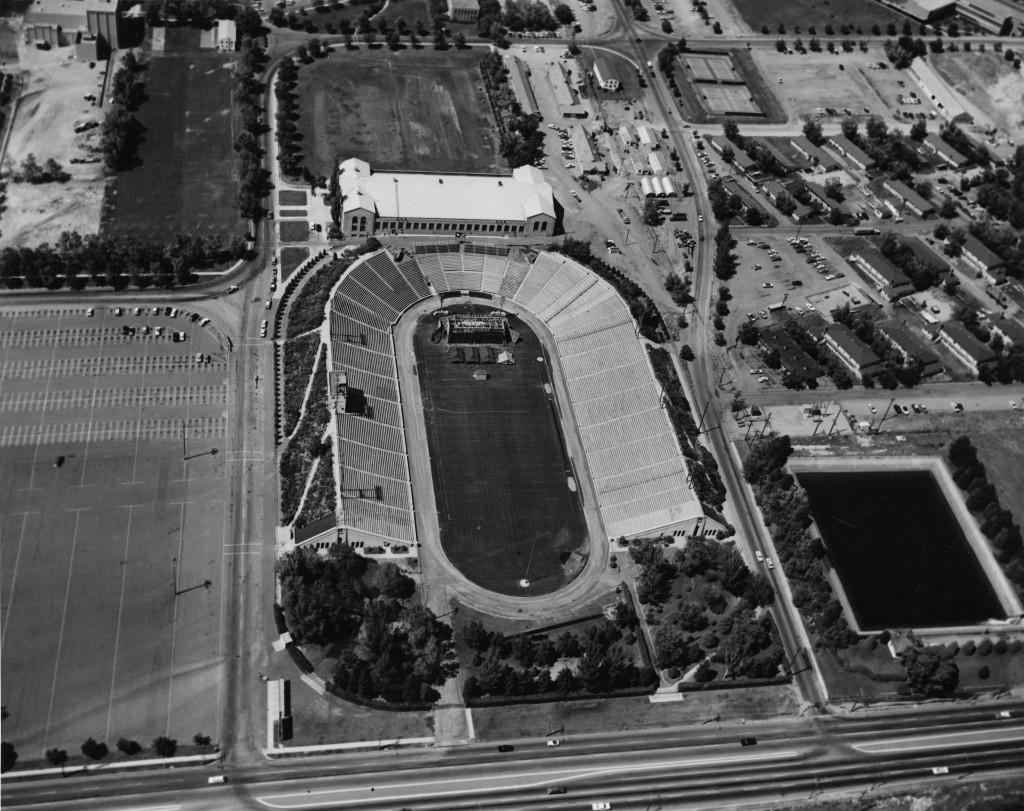 “We have bigger rows and roomier seats than these older stadiums in California,” Burk said.

But being modern doesn’t mean Rice-Eccles Stadium doesn’t have a rich history.

“Just the fact that there’s been a stadium here since the 1930s, [a stadium] has always been right here, which is cool,” said Dave Wakefield, guest services manager at RES. “We haven’t moved it around like some other schools.”

Unfortunately for history buffs and those who may feel an attachment to the old Rice Stadium, Burk mentioned his department realizes that last bit of history in the south endzone building will have to be torn down in the near future.

“It’s showing its age,” Burk said of the building.

As a growing university, these changes were most likely inevitable. But when Salt Lake City found out it would be hosting the 2002 Winter Olympics, the Opening Ceremonies of which were the biggest event ever hosted inside the confines of Rice-Eccles Stadium, they became necessary.

With all eyes set on Salt Lake for the Olympics, it was a make-or-break time for the city to either grow on the national scene or, worst-case scenario, falter. There are old relics and stadiums of past Olympics across the globe that seem to just go to waste and rot.

However, Salt Lake City and specifically Rice-Eccles Stadium proved that you can have nice things at a discounted price.

To compensate for the amount of people who would be attending the opening and closing ceremonies, stadium personnel placed temporary bleacher seats by the south endzone. They thought this was the best option versus building an entire new venue, which is the case for some Olympic host cities.

The stadium did so well that Burk still receives calls from future sites for advice. Rice-Eccles Stadium, and Salt Lake, has become a benchmark example for other cities. Not a bad reputation to have for a college stadium.

“Every time an Olympics is awarded, we start getting visitors,” Burk said. “Salt Lake Olympics is still known for the best financial model of any Olympics.”

While Rice-Eccles Stadium may not be the Rose Bowl when comparing histories, RES has had a multitude of big-time events within its walls. Along with the Olympics, the stadium hosted Supercross (a worldwide tour in which RES was one of only two college venues on tour) in 2001, U2’s 360 degree concert in 2011 and a number of international soccer matches, including one between Real Salt Lake and Real Madrid in 2006.

It’s clear Rice-Eccles Stadium is capable of hosting just about any event, but Utah football fans will be happy to hear it’s not done improving. Just recently, the program, along with the stadium personnel, decided it was time to replace the turf field — which will debut during this Saturday’s Homecoming Game against No. 23 Cal.

Though history still lingers inside RES, it is the goal of Burk and company to tackle one major project each season to help improve the stadium. For the current campaign, it was the “$3.3 million-plus” bathroom renovation near the north endzone.

But what will be the next addition to Rice-
Eccles Stadium?

“Next year’s project will be a new video wall,” Burk said. “It’ll be moved back about halfway into the plaza and it’ll be four times the size.”

No matter what kind of renovations or improvements are made to RES in the coming years, there’s one constant selling point that hasn’t changed since the days of Ute Field.

“The view is immaculate,” Wakefield said. “No one else can compete with that, really.”