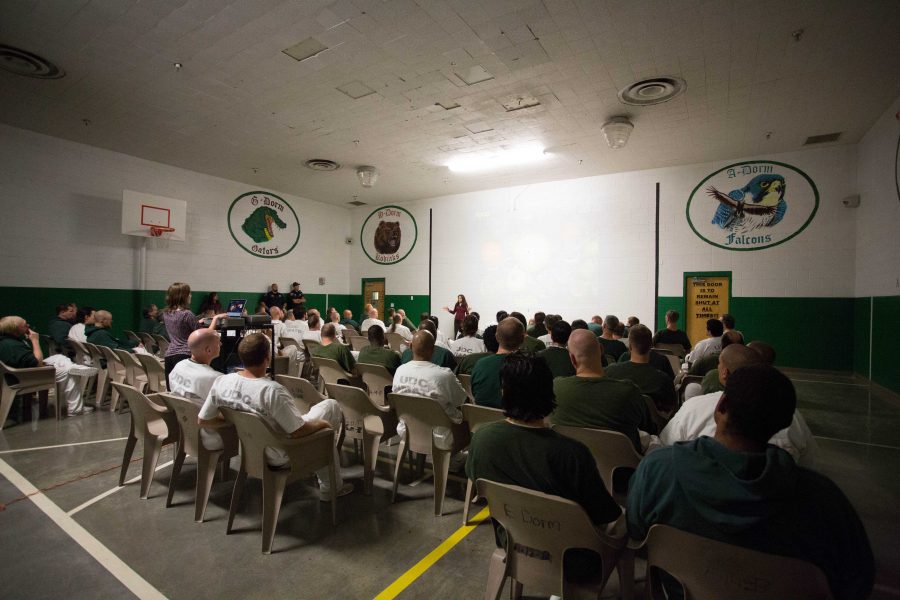 While “maternal” is not generally a word used to describe several jail inmates crowding around a bucket of baby fish, gazing tenderly at the little creatures, it was the only word Celeste Henrickson could think of.

Henrickson, a program coordinator for the Initiative to Bring Science Programs to the Incarcerated (INSPIRE), is involved with conservation projects recently introduced to the state prison. This summer, INSPIRE constructed a pond where inmates are nurturing the least chub, a state sensitive species of fish.

Launched by Nalini Nadkarni, a professor of biology, INSPIRE came to Utah in March 2014 after Nadkarni began a sustainability project in Washington prison in 2005. When she came to the U, Nadkarni worked with the center for science and mathematics to bring science professors inside Utah corrective facilities.

Lectures are held monthly and have an average attendance of 50 people. Morris said they gather data from inmates before and after each session, and though it’s difficult to measure the exact impact, Morris said “results are encouraging.”

“We were at a prison lecture, and we had a guy who ran in at the end, and he was so sad because he had taken a nap and his buddy was supposed to wake him up,” Morris said. “He said this was the first one he had missed since we’ve been coming there.”

The new conservation pond at the Salt Lake County Jail has also changed the inmates, Henrickson said. Eight inmates go out each day to monitor the water quality and maintain the least chub population. They feed the fish, scare away birds, check the water temperature and remove algae.

“At this kind of facility, traditionally there is no nature involved,” Hendrickson said. “Having a focus on conservation and nature has changed everyone in subtle ways.”

Adam Beehler, a lecture demonstration specialist of physics, taught a lesson about how vocal cords work. Initially, he didn’t know what to expect, but in the end, Beehler had 40 interested individuals ready to learn. He said he was surprised to see how engaged the audience was.

“They were respectful, and they had a lot of good, appropriate questions. Better than a lot of my students in class ask,” Beehler said.

Beehler said he would not be surprised if some of the inmates choose to study the topic once they are released, something Henrickson, Morris and Nadkarni hope will be a result of the program.

“It’s one thing to serve time and regret what you did. It’s another to get out and start your life again,” Henrickson said.

The ultimate goal is to tackle a national problem of correcting criminal behavior and preparing inmates to enter the workforce upon release. Seventy-six percent of inmates, according to the National Institute of Justice, are re-arrested within five years, Henrickson said. Most of them leave with a label that is almost impossible to remove, and they are aware of that.

To counter these issues, the program hopes to develop a post-release program for inmates interested in STEM fields to receive field training.