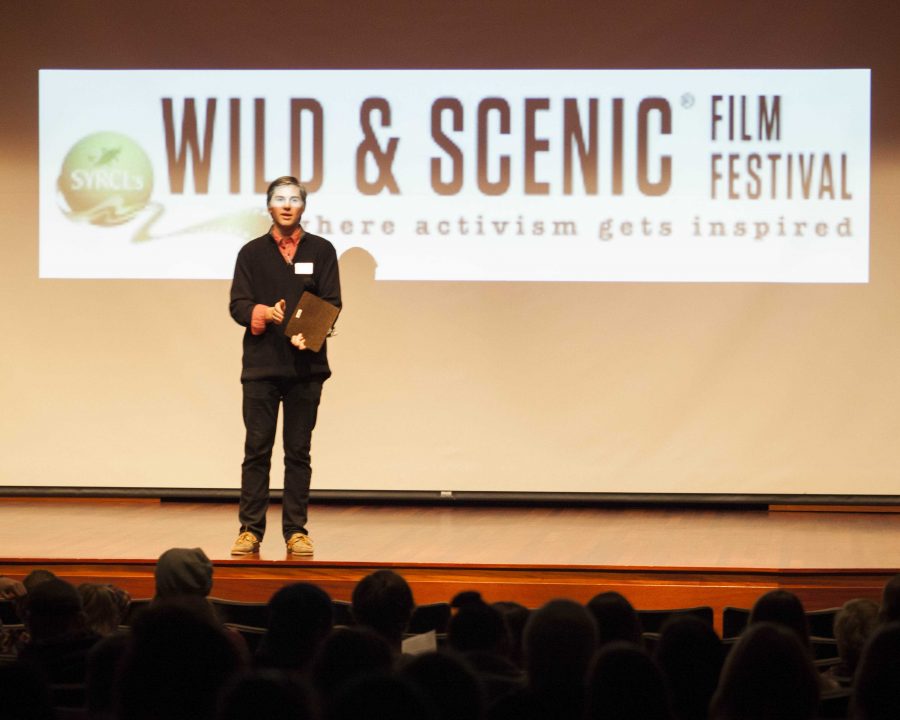 The host speaks before an audience at the Wild & Scenic film festival, Wednesday November 18, 2015.

Who ever said environmental studies wasn’t fun? Many of those who are drawn to it are skilled outdoorsmen, so naturally you’d think the program would be seen as the exciting field it is instead of something specifically and only for academics. On Nov. 18 the U hosted the 13th Annual Wild & Scenic Film Festival, at the UMFA, where both excitement and academia were put on display in thought-provoking and awe-inspiring ways.

The film festival, hosted by the South Yuba River Citizens League (SYRCL) was preceded by a serve-yourself dinner from the Hungry Bear Bake Shoppe, coupled with a silent auction on high-quality environmentally friendly supplies. Beneath the buzz of casual conversation, a live guitarist and singer were performing. The music was upbeat and fun to listen to while eating, bidding or people-watching, and it set the scene for an engaging evening.

The main event was the film festival itself, which borrowed seven films from the larger event that was the 13th Annual Film Festival held in Nevada City, California. Each film was short and poignant. There is so much going on in the world all around us, and the films worked to present that.

From films about the rapid decline of urban and suburban fireflies, to the recent pulse of water from the dammed Colorado River allowed to traverse its old habitat in Delta Dawn, to a reminder that The Wilderness Act (which recently celebrated its 50th Anniversary last year) was made not to keep the land from us but to save the land for us, the film festival went far in reminding viewers of the beauty inherent in nature. Between films about current events, two particular films argued for the why: Why should we care? What would be lost if society continues on its planet-destroying path?

“The Ridge” and “Sufferfest 2” show most forcefully that loss of land would also mean a loss of a certain kind of magic that only nature can provide. The Ridge showcases extremely talented biker Danny MacAskill traversing the rocky, cliff-faced, rain-soaked Isle of Skye near Scotland. Watching the film, it was possible to feel present with MacAskill, making his extraordinary feats all the more amazing as well as terrifying. Sufferfest 2 follows Alex Honnold and Cedar Wright’s efforts to bike to and then climb 40 or so peaks in and around the state of Utah. Their climbing skills are mind-blowing as they topped peaks, some extremely windy, some with sandy (and unstable) ledges, and some with high snow.

Nature is beautiful; that never has been controversial. Environmental Studies showed last night that its interest in maintaining that beauty goes far. So why not join the environmentally friendly side? Unlike the dark side, environmental studies actually does have cookies. And they are provided by no less than The Hungry Bear Bake Shoppe.