Football: Utes Pile it on Early, Hold on to Beat BYU 35-28 in Las Vegas Bowl 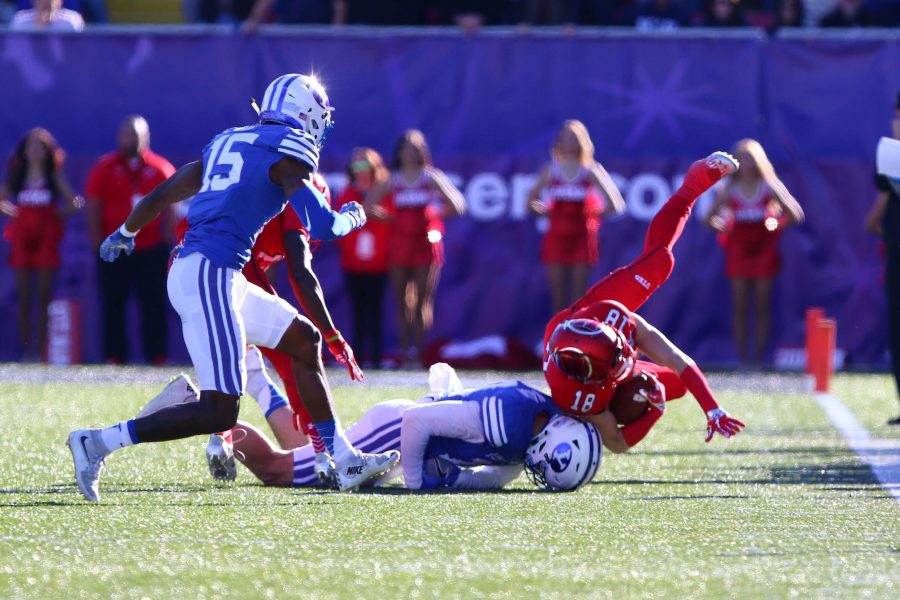 LAS VEGAS – Just as head coach Kyle Whittingham predicted, this rivalry game came down to the wire. Despite a hot start, Utah failed to do anything the remaining 45 minutes as BYU kept inching closer and closer to the 35-point mark they set early on. In the end, the Utes closed out their season with a win over the BYU Cougars in the Royal Purple Las Vegas Bowl 35-28 at Sam Boyd Stadium on Saturday.

“We played real well in the first quarter, very average in the second quarter, pathetic in the third quarter and half the fourth quarter, and then finished pretty average,” Whittingham said. “Add it all up and evaluate the game as a whole, the entire body of work wasn’t bad. Even though our numbers were not good at all, we took care of the football. In the final analysis, we had enough in the tank to get the win.”

Utah had a total of 198 yards in the game compared to BYU’s 386 yards. Joe Williams led all offensive players with a 113 all-purpose yards, 91 rushing and 22 receiving. Senior quarterback Travis Wilson ended his final game as a Ute with 71 passing yards.

Fellow senior Tevin Carter was the star of the defense, recording two interceptions, one which he returned for a touchdown as the defense had a total of five takeaways all on the first five BYU possessions of the game.

“Tevin is a tough, talented football player,” Whittingham said. “It was great to see him have the game he did.”

The Utah defense came out firing in the first quarter. BYU quarterback Tanner Mangum fumbled the ball on the Cougars’ first set of downs, turning the ball over to the Utes. Williams then opened up the offensive game running and finding gaps in the BYU defense. He eventually found his way into the endzone for a 1-yard rushing touchdown and gave the Utes the 7-0 lead.

When the BYU offense came back out on the field, Mangum turned the ball over again — this time, his pass was tipped and Carter intercepted the ball, taking it 22 yards back for the score and Utah was up 14-0.

“All credit goes to my teammates,” Carter said.

The next drive, BYU was moving the chains, but Magnum threw yet another interception and again, it was Carter who picked him off. This time he returned it 33 yards to the 1-yard line. Williams capped this off with another touchdown to give the Utes the 21-0 lead.

The Cougars were again making some strides in their backfield, when Mangum threw his third interception to Dominique Hatfield, who also returned it for a touchdown and the Utes were up 28-0 in just the first quarter.

BYU again fumbled the ball soon after, and Utah recovered once more, making for the fifth turnover of the game. Wilson ran into the endzone for the 20-yard touchdown to make the score 35-0, and it seemed as if the Utes were going to run away with it.

“Those plays weren’t gifts, we forced those turnovers,” Whittingham said. “That’s just our defense flying around, great pressure on the quarterback. Our team works hard.”

There were several three and outs between the two teams in the second quarter, but punter Tom Hackett was able to get a couple of punts within the 5-yard line during that span. With under a minute left to play in the half, BYU finally got on the board with a touchdown to make the score 35-7 at the break.

The Cougars opened the second much like how they closed the first half, scoring a touchdown to make it a somewhat closer game at 35-14. Utah was forced to another three and out, but Hackett faked the punt and rushed 21 yards to get the first down. It was to no avail, as the Utah offense failed to get anything going on the next set of downs.

Towards the end of the third and the beginning of the fourth, Utah started to move the ball down the field. However, after gambling on a fourth down, Wilson was sacked for a loss of five yards and the Cougars took over with some momentum.

The Utah defense came up with a few stops, but let up on a big fourth down, allowing Mangum to find a receiver down the field for 44 yards. Later during the drive, on another fourth down, Mangum found a wide open receiver to to make the score 35-21.

Later in the fourth quarter, BYU used another big 40-yard play from Magnum to his receiver Devon Blackmon to get near the end zone. The Cougars eventually made it in, making the score 35-28.

The Cougars tried to pin Utah’s offense deep, but were flagged for kicking the ball out of bounds and Williams got a first down to seal the deal.

The win marks the first time that the Utes have recorded a 10-win season since joining the Pac-12.

“Winning 10 games with the schedule we had is a big credit to our players,” Whittingham said. “We’re feel like we’re trending in the right direction.”