Women’s Basketball: Katie Kuklok Not Taking Anything For Granted 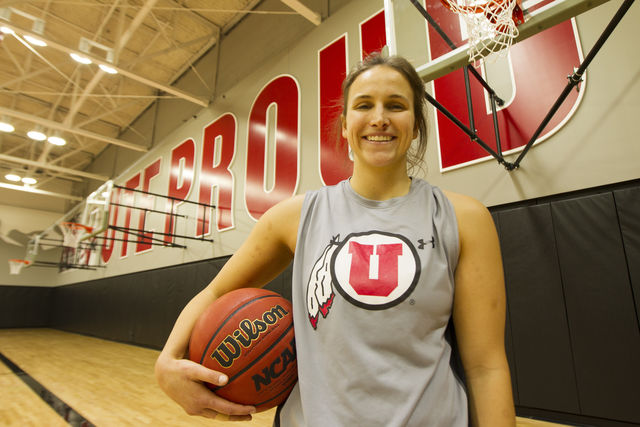 It’s the beginning of training camp in 2014 for the Utah women’s basketball team. The locker room is boisterous, full of young women — some new, some returning. The promise of a new season and a fresh 0-0 record before them, the heartbreak of the previous season behind them.

Amid the bustle of players, Katie Kuklok, a UVU transfer, opens a box from her coaches. Inside is an array of white and crimson Utah Athletics gear.

“I got this huge box of gear and it was probably more gear than I’d ever gotten in my life. And I just had tears in my eyes and I was just so humbled by the experience,” Kuklok said.

The season that followed that moment was not a banner year for the Utah program. The team suffered a rash of injuries, Kuklok among them with a season-ending knee injury before her first season as a Ute even began. The team limped to a Pac-12 worst 9-21 record and fired its then-head coach Anthony Levrets, hoping for a turnaround.

But somehow all of it, from the box of gear to her tumultuous first season with Utah, seemed to instill in Kuklok a sense of gratitude. Having played for three different schools and sat out two separate seasons, Kuklok isn’t taking this year lightly.

“I think that that’s how I feel being here, being able to use this brand new facility and having access to shoot all the time and having so many different outlets invested in you,” she said. “Anything I need to be successful, I have this year. It’s nice to have so many people care about you and want to see you succeed. It’s a great feeling.

Fast forward one-and-a-half years from when she opened her box of Utah Athletics gear and the redshirt senior is the last player on the practice court. She’s honing her shot, the mechanized shooting form, feet set in sync, launching the ball on a lofty arc that plunges through the bottom of the net. She understands that this is her last year of college basketball. She understands all too well how the work the team has done to earn a 10-4 record can be swept away with the turn of an ankle or knee.

“I don’t know how else to describe it, she just gets it, she gets life,” said Utah head coach Lynne Roberts of Kuklok. “It’s nice to have that.”

Kuklok began playing her collegiate career near her hometown of Poway, Calif. at San Diego. As a freshman, Kuklok saw little playing time but flashed her brilliance as a three-point shooter when she was on the court, shooting 36.5 percent from behind the arc in her first season.

Kuklok then transferred to UVU, where she was forced to sit out what would be her second season due to NCAA transfer rules, but continued to perfect her shooting. In 2013-2014, her first season as a Wolverine, Kuklok was named to the Western Athletic Conference All-Newcomer Team leading the Wolverines in scoring with 16 points per game. Kuklok certainly caught the eye of Utah scouts in 2013, scoring a career high 34 points against the Utes, while also earning five assists.

Following the 2013-2014 season, Kuklok transferred to Utah where she expected to play the final two seasons of her college basketball career before a season-ending knee injury sidelined her for all of 2014-2015. This season, her first and last playing for the Utes, Kuklok was expected to make one more adjustment — coming off of the bench. Following a career year as the focal point of her team’s offense, Kuklok was expected to shift roles from primary option to sixth man.

“It’s definitely a different role than I played before but I don’t know … I love winning. And so whatever we’ve gotta do to win, I’ll do it. [Even] if that means coming in and getting five assists or playing good defense and rebounding,” Kuklok said of her new role. “Anything to help the team, I’m excited to do it. I love coming in and hitting threes for the team and the bench getting hyped, its awesome.”

The injury, the sidelined season due to transfer rules, the offseason workouts refining her jumpshot with Andrew Olson, a former All-American and National Player of the Year; these are all ingredients to Kuklok’s game and all a part of why, Kuklok explains, she’s not surprised at Utah’s strong play this season.

“I don’t think I’m surprised at how well we’re doing because we’re super healthy, we’ve got it all together,” she said. “We did struggle last year, we struggled for lots of different reasons, not just basketball. So now that we’ve got some wins under our belt, we’re all just really happy about it and we’re not going to take it for granted.”

When asked about her future, what her plans are after college, Kuklok smiles. Like all college students when asked about their futures, she explains her area of study and rattles off a list of opportunities in it.

But beneath it all is the enormity of this moment, in the middle of the season, standing in the center of the brand new basketball facility. Kuklok is relishing it.