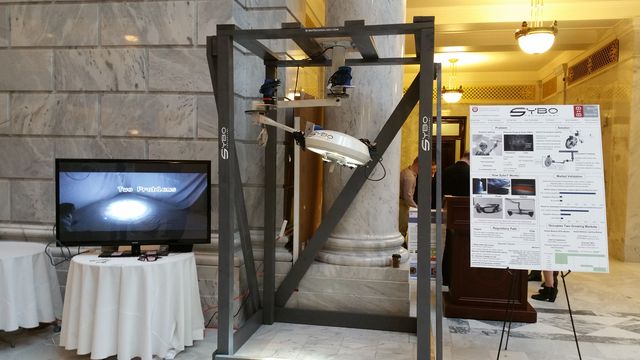 Brody King stood on a stool in an operating room, manually adjusting the light so the surgeon could see inside the patient’s body. After several surgeries, King decided a robot would do a better job at light moving — so he set out to make one.

King, a junior in bioengineering, worked with six students to make the SyboT, a robotic system that allows surgeons to control lighting through a foot pedal and goggles with an adjustable laser.

On Saturday, King and his team of Ph.D., masters and undergraduate students will compete at the Utah Entrepreneur Challenge. King’s team has already raised about $6,400 in competitions, such as Get Seeded and Bench-2-Bedside, which took place on April 4.

The business, Sybo Technology, has come a long way since last year, when King began recruiting engineering students like Eric McClain, a Ph.D. student in mechanical engineering, to make the robot. 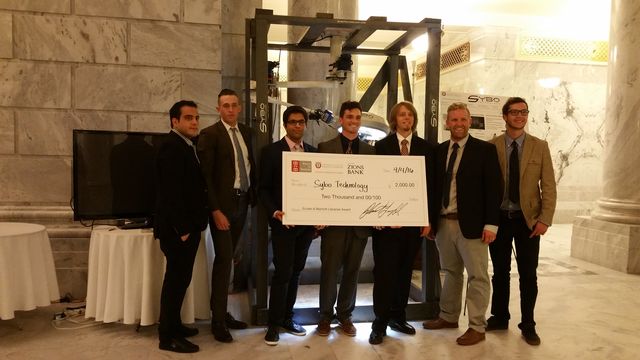 McClain heard about King’s idea through a classmate and decided to get involved with the lasers that track where the surgeons look. It took a lot of personal investment in time and money to start, but now the business is starting to pay off.

King said this technology helps surgeries run more smoothly and keeps the focus on patients rather than on adjusting the lighting.

“Especially in emergency procedures when time is very important, doctors now, they have to set their tools down, reach up and grab the light, adjust it, and then they have to pick their tools back up and continue,” he said. “That process takes about 15 seconds, whereas they can simply push on the foot pedal, look and adjust it in two seconds with SyboT.”

Doctors wear goggles containing one visible light and one infrared laser. When surgeons press the foot pedal, the lasers track where they’re looking. Cameras detect the position of these lasers and, based on the topography of the patient’s skin, automatically change to shine at the optimal angle.

Sybo Technology has already made one prototype. The next step is to make a model that has a broader range of movement and includes a tracking instrument for medical devices. Objects such as medical sponges or needles are left in patients an average of 39 times per week in the United States. SyboT alerts doctors on a monitor when objects are still in the sterile field of surgery, King said.

The team is also in the process of creating a patent with the law school. King said the resources at the U have been critical in getting the product and business to where it is today.

King, McClain and other students on the team hope to continue working with the company. For King, he hopes this device will personally help him further down his career path.

“My main goal in life now is to develop a device and use it as a surgeon,” he said. “So I am hoping I can use SyboT in the future when I am doing a procedure.”