Environmentalism can be truly beautiful.

Looking at some of Jodi McRaney-Rusho’s art, that seems obvious. Stunning glass work, in the form of beads, 3-D animals, canvas pieces and so much more adorn all available surface space in her Sugarhouse studio.

Looking at all of it, you would never guess that these stunning creations had past lives, often as glass bottles. For McRaney-Rusho, this is intentional.

Her success in this field speaks to her talent with the glass, as well as to her dedication to environmental awareness. But it didn’t come easy.

“I had always been interested in glass, but mostly in glass beads and torch-work,” McRaney-Rusho says. “So I had researched this a lot — I’m not a big class taker, I kind of like to figure things out on my own — so what I came up with is I needed a kiln.[…] So I bought a kiln […] and I was so excited, and then I realized I couldn’t afford to buy glass. Because art glass is extraordinarily expensive.”

Even stuck with a shortage she couldn’t easily remedy, McRaney-Rusho did not give up. After her and her husband replaced windows in their home, and her stock of window glass was unusually high, so she started looking into ways to make the most of what she had.

For three years, she worked at it, conducting each attempt as if it were a science experiment. She wrestled with the limits of post-consumer glass, determined to prove everyone else wrong, certain that what she was working at was worth her efforts.

Until she finally found a system that proved to be the most effective of any she’d tried.

“I learned how bottles are made and how windows are made and I adapted that manufacturing process to a home studio. So I came at it from the opposite direction, and in the process I fell absolutely in love with it,” she said.

In love with it she has remained, currently utilizing solar power for the process to make it all even more environmentally friendly.

At this point, she finds she prefers post-consumer glass to the far simpler and easier-to-use art glass. “The material limits you, but it’s also really, really satisfying to know that this is not going to the landfill and I think it’s fantastic that someone who’s getting married can have champagne at their wedding reception and bring their bottles to me, and I can make a piece of art for them out of the champagne bottles from their wedding,” she said. “It makes the artwork mean a lot. I think the bottles that you used at your wedding, they take on part of the joy of the occasion that translates into the artwork and you don’t get that with art glass because it’s straight from a factory. I think it works the other way too; I get some glass that nothing will work, and I chalk it up to not a happy party and we move on.” 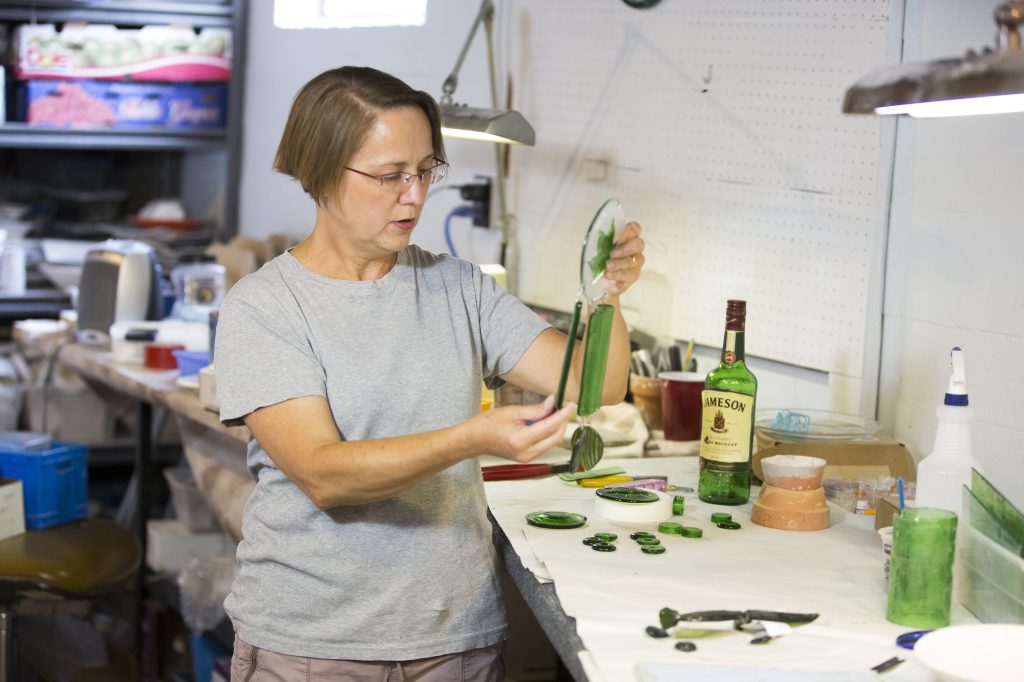 A U graduate, McRaney-Rusho was a non-traditional student with a major in economics. She says this educational background significantly added to her own work and with her efforts to educate others also interested in making something new out of post-consumer glass. It’s all about the resources, she says. Someone who only has an hour to spare for art needs to know how to make the most of that time. McRaney-Rusho’s awareness of this fact allows her to help others do just that. This, she explains, is incredibly fulfilling.

“All of this time later, now what I’m doing is teaching other artists how to do this. So instead of me just changing the world with my artwork, I’m changing the art.”

McRaney-Rusho currently has art in a few different galleries, in addition to the art she sells straight from her website at GlassWithAPast.com.