H2h: To Protest or Not to Protest? 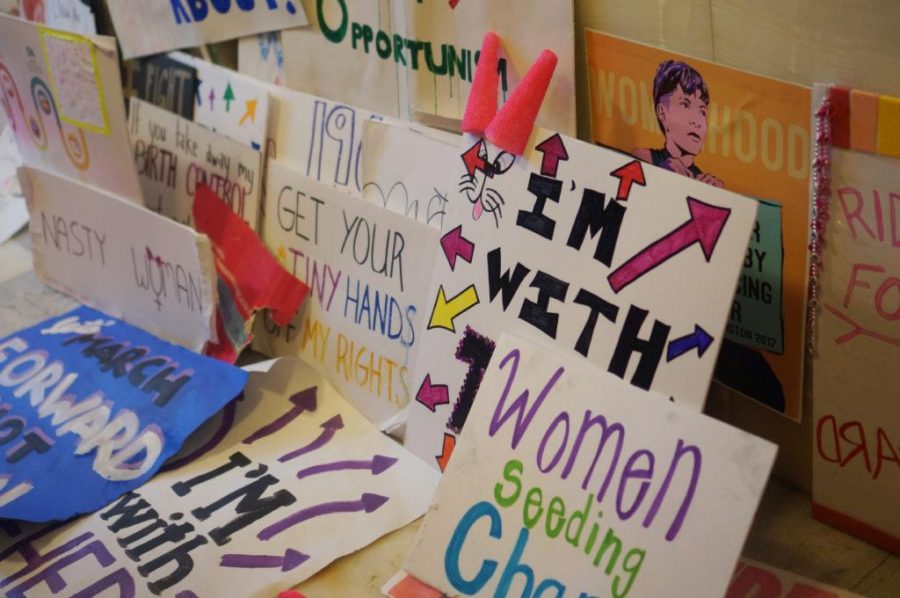 Over the weekend of Jan. 21 2017, one day after the 45th president of the United States was inaugurated, women all over the world took to the streets to protest for their rights.

Yes, it’s 2017 and women are still having to “protest” their rights. The initial march took place in Washington D.C where hundreds of thousands of women gathered to uplift and support eachother and to fight for their rights and freedoms. Marches popped up all over the U.S. and even outside our borders in places like Sydney and Melbourne, Australia.

Women banded together for the initial purpose of supporting Planned Parenthood and expressing their opinions on the new president. While not all women may support all these “feminist” views or even the backlash of the president, I saw it as girl power.

As a woman, it is frustrating to see that I still sometimes cannot make a legal decision about my body. While I was unable to march in Park City due to a case of the stomach flu, streaming it online was empowering and uplifting. I’m a firm believer in girl power; too many times we as women claw at one another when really, we should be uplifting one another. We experience many of the same stories and ideas so why not share them positively?

Coming together in the form of a march was a simplistic show of power in numbers. To  be able to exercise freedom of speech in a band of positivity is what women needed. It didn’t matter whether women were there to express their dislikes about the inauguration or if they wanted to stand with Planned Parenthood, the message of empowerment was there. This isn’t to say we don’t have any rights as women, but it’s not the 1950s anymore and we should have a say about what we want to do with our bodies.

From my standpoint, this movement is about wanting more freedom of speech surrounding our bodies. Yes, I’m tired of paying an ungodly amount for birth control each month, just because I’m trying to be proactive about my sexual health. Yes, tampons are expensive and yes, it’s frustrating not being treated the same as my male counterparts in certain situations. I’m often looked at differently just because I’m a woman in a male dominated workplace. That shouldn’t happen if I qualify for the part. I’m not just a pretty face working in front of the camera, I can work behind it as well.

It’s hard being a woman, there is no way around that. But this isn’t a plea for a handout, this is a call for more positive activism to fight issues like rape culture and access to affordable feminine hygeine products  each month.

Marching as one was a beautiful way to see that there is still hope and beauty in a world that seems divided. It was an amazing experience seeing not only women but men, sons, uncles, grandfathers, and brothers support this cause. This is just onestep of us being heard. We’re here and we’re proud to be women and proud to be Americans expressing our freedom of speech.

There isn’t a lot I consider more important than raising and sustaining support to implement progressive change to positively affect social welfare. Maybe it’s the new election of President Donald Trump or my recent involvement in non-profit social advocacy groups, but I have strong feelings that America needs to do all we can to keep our nation moving forward.

I support peoples’ rights to free speech as much as a person can. After all, I’m an opinion writer for a public university newspaper, safely stating my beliefs. I think political and social expression in the form of protests, like public assembly and marches, have the potential to be harmful to the causes they’re intending to support. Now, I understand that the recent protests we’ve dealt with here in Utah regarding President Trump’s beliefs and behaviors were not intended to be violent (though there were some reports of smashed windows). They haven’t really obstructed other’s rights or impeded on other’s well beings. However, that doesn’t mean they aren’t in some ways harmful, or that even when a protest is handled lawfully, it doesn’t have adverse consequences to the causes it’s intended to act in favor of.

After a protest ensues, it’s a popular consequence that those on the opposing side of the cause wind up even more resentful of the cause’s supporters than they were previously. To me, there’s a difference between educating the ignorant on controversial issues to better get your points across and rubbing your beliefs in someone’s face. For instance, acceptance of homosexuality and the human rights associated with that faced an increase in opposition. Arguably due to the fact that many homosexuals and supporters in the name of protest would flaunt their sexualities to a more conservative public, through means of indecently making out with someone of the same sex or cross-dressing overly provocatively.

I understand that limiting human rights is beyond disrespectful. It should never happen and when it does that kind of cruelty should be fought. But it seems to me that trying to get back at an oppressive culture through other acts of disrespect isn’t the most mature or effective way to propel a cause. I agree that sometimes acting outrageously can draw attention to a cause that otherwise might be ignored. I think it’s important to understand that actions of public protest affect other supporters by attaching stigmas to their beliefs that may not always be true. For example, homosexuals and their supporters are all obscene, inconsiderate individuals — which, of course, isn’t the case. Because some people have chosen to act blatantly disrespectful on a public stage in the name of some social issue, like human rights, other supporters are forced to unfairly take ridicule for actions they’re not responsible for.

I don’t think it’s good to willfully hand the opposition fuel for their hate. Yes, there are social issues that bother me immensely, and sometimes I don’t understand how people could possibly think the way they do. However, I’ve never felt compelled to act out against oppression to the point where I’m essentially acting as if I’m rebelling against my mom for not approving of the friends I’m hanging out with. Sneaking out at night and painting my nails black — things I wouldn’t do unless I was trying to push some buttons in the name of “my cause.” Poor analogy maybe, but I think there’s more to be said for producing actions that showcase an educated understanding of both sides, personal responsibility and respect for others.

If you ask me, the best way to get people to take your side is to be upstanding and as agreeable as you can be, even while carrying opposing views. It’s hard to hate someone who is doing well and acting as a good person. Let people know that homosexuals deserve equal human rights by acting decently and agreeable outside of the cause, as well as within. Show others that they’re good people too — not any less for believing in something not everyone does. Show the opposition that the LGBTQ+ community is at least as capable as the majority, as smart as the majority, as good and decent as the majority. Additionally, the best way to show that women and ethnic minorities deserve a place high on the corporate, or professional ladder is by being as good, or better than the majority men at their professional works. To those who fall into these categories, get a higher education. Work hard. Kick ass. Because actions like that speak louder than a megaphone and picket signs. But they take work. It takes an effort to educate yourself and others, and then develop beliefs based on that education. It takes time to defeat the opposition by essentially outdoing them in life and kindness. That’s the best shot we have at generating legitimate, incremental influence in today’s society, as supporters of minority and human rights.