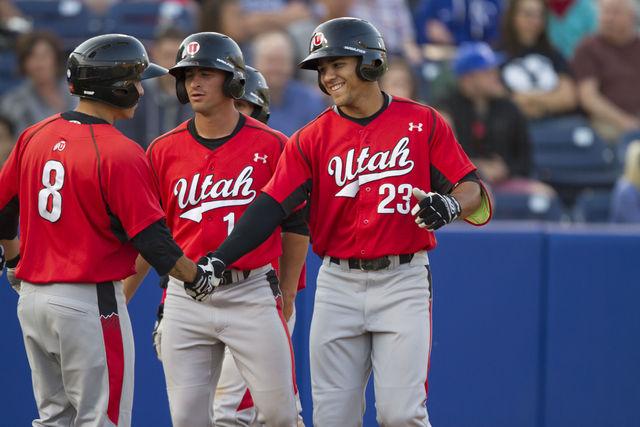 The University of Utah baseball team is in sunny California for the weekend as they open up their season against CSU Bakersfield. The three-game series gets underway Friday night at 7 p.m. MT, followed by Saturday’s ballgame at the same time before things wrap up with Sunday’s game at 1 p.m. MT.

“It’s been a long six, seven months of training,” said head coach Bill Kinneberg. “Now we finally get to put the uniform back on and so everybody is excited naturally and the grind starts.”

Utah is coming off of a 19-11 conference finish, and it will return many of the core athletes who contributed to the 2016 Pac-12 Championship. All-Pac-12 players Dallas Caroll, DaShawn Keirsey, Jr. and Jayson Rose are again expected to serve as strong weapons on the field. Seniors like Dylan Drachler and Josh Rose will also look to make an impact specifically in the pitching and fielding areas.

Although a strong portion of talent will be back, Utah is still being forced to replace several four-year starters. Utah lost second baseman Kody Davis and shortstop Cody Scaggari, two positions that will feature new faces this year.

“We’ve got three or four guys that are challenging for those two spots in particularly at shortstop,” Kinneberg explained. “It’ll be a little bit of a battle early. We may go back and forth all year long with [Kyle] Hoffman and [Ellis] Kelly at short.”

Freshman Oliver Dunn, who was a first-team all-state selection at Cottonwood High School, has impressed the coaching staff with what he has to offer. Kinneberg likes what he has seen from Dunn, and he believes he will do a good job at holding down second base.

Other freshmen looking to make a name for themselves in the program are Alex Isola, former all-state selection at Jesuit High School and Jacob Rebar, who was a three-time all-league selection at West High School. Kinneberg believes that Isola needs to get his feet wet in college ball. He is right behind sophomore Zack Moeller who played in 22 games last season and had 17 starts. As for Rebar, he is pitching “extremely well,” and he will play the role of a very important reliever for the team.

“Those two guys are going to be the two freshmen or three freshmen that really see a lot of action I think early,” Kinneberg said.

This weekend Utah will show off their pitching at Hardt Field. A pitching staff that is believed to be even deeper then last season’s group will take the mound. Between Jayson Rose, who was the only Pac-12 pitcher to have over 100 strikeouts in the regular season, sophomore Riley Ottesen who is looking to take over Dalton Carroll’s position as a starter, and junior Josh Lapiana who will be on the mound to start games on Sundays, the starting rotation appears to be solid.

“I think to be able to get the wins this weekend we all need to play as a team, and we’re very capable of doing that,” Jayson Rose said. “I think we came off a really good season last year, and I think this year is just going to be even better than that.”

As the team prepares for the weekend competition, Kinneberg can’t help but look forward to arriving at the park, putting up the starting lineups, and playing games that matter again, because beginning tonight, baseball is here to stay for a while.