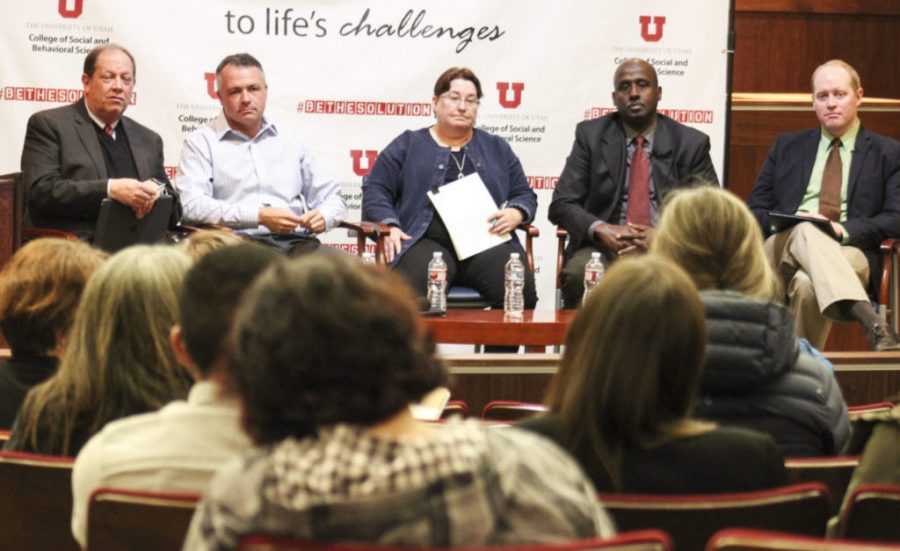 Jason Perry, the University of Utah’s Vice President for Government Relations, opened the March 2 panel discussion on immigration and refugee policy by quoting the Utah Compact —“The way we treat immigrants will say more about us, as a free society, and less about our immigrant neighbors.”

The panel was the second in a series at the U discussing differences of political opinion and how to bridge the divide after the 2016 presidential election. The first panel was on healthcare reform.

In 2010, at the same time Arizona and other states were passing laws enabling police to ask community members to prove their citizenship or legal residency, Utah civic groups — businesses, law enforcement agencies, religious leaders and politicians — published a document called the Utah Compact.

Outlined in the document are five principles the non-partisan group thought should guide immigration policy in Utah — that “immigration is a federal policy issue,” that law enforcement “should focus on criminal activities, not civil violations of federal code,” opposition to “policies that unnecessarily separate families,” acknowledgement of the immense economic benefits immigrants bring to communities, and that “we must adopt a humane approach” to immigration reform.

Perry, who also serves as director of the Hinckley Institute of Politics, questioned the panel about what principles and national interests should guide policy decisions in regard to immigrants and refugees. Reference was made to the Utah Compact document several times.

Bradley H. Parker, Esq. of the Refugee Justice League of Utah began his remarks by explaining that “some issues should transcend politics,” which proved to be an overarching theme of the discussion. Despite major differences in politics, the panelists largely agreed on the values U.S. society should hold as it approaches immigration reform and refugee resettlement.
Moral and Economic Imperative
Jason Mathis, Executive Director of the Downtown Alliance and Executive Vice President of the Salt Lake Chamber, said there are two major reasons the U.S. needs to welcome immigrants and refugees — moral and economic.

Morally, he said, Utah’s current-day response to refugees is colored by the state’s cultural heritage of settlement by religious refugees.

Parker said that “[helping others] is an essential part of us” and that “accepting refugees is the right thing to do.” Professor Caren Frost, Director of the U’s Center for Research on Migration and Refugee Integration, called it a human rights issue.

Derek Monson, Director of Public Policy at conservative think tank Sutherland Institute, said that the “most pure form of economic drive” in this country exists in immigrants. He went on to say that the U.S. has been sustained and renewed by them both economically and culturally.

Providing a statistic that about 50 languages are spoken in Salt Lake School District alone, because of refugees and immigrants, Aden Batar, Immigration and Refugee Resettlement Director at Catholic Community Services and a refugee himself, rhetorically asked where else that type of diversity can be found.

He also said that his organization sees most refugees become self-sufficient within six months of their arrival in Utah, providing for their families and unreliant upon public services.
Overcoming Politics
Most of the discussion centered on one idea: overcoming politics to humanize the issues and come to solutions together.

Monson said the question of immigration and refugee resettlement is fundamentally one of what it means to be a human being and what it means to be American. He feels that one of the biggest failings in the conversation surrounding the issue is people’s inability to remember that everyone involved is similarly concerned with how to improve life for themselves and their families. He explained that a lot of people agree on policy decisions, but fractured debates keep those solutions from being reached.

The panelists agreed that people should have respectful conversations with their refugee, immigrant and native-born neighbors to reach better understanding of the issues and the people impacted.

Frost said that, in her work, she came to realize that she doesn’t understand the experiences of migrants and refugees because they’re not the same as hers, explaining that “If I don’t ask, I’ll never know.” She posited that society needs to prioritize listening and politeness in these valuable discussions, and that it’s deeply American to have this kind of conversation.

Parker suggested that people should extend themselves to associate and engage with refugees and immigrants.

Monson continued by saying that the question of immigration reform is primarily a question of getting over the political divide created by failure to communicate across ideological lines, and that it requires individual members of society to transcend these ideas to try to see the humanity and legitimacy represented in the other viewpoint.

He says “it’s a fiction” that American society can’t agree on this issue and even said that most policymakers he’s spoken with privately agree on most of the ways the law should be reformed. To be involved in this type of conversation, the panelists said, people can spend time to become informed, to volunteer in schools helping children learn to read and speak English, and to help others see the realities of immigration and resettlement, among other things.

Mathis said that, once members of society have educated themselves about the people and the policies involved, they “have an obligation to speak out” to others about their informed opinions.

In regard to public policy, the panelists provided several examples of things they think most of the American public agrees on.

Parker said the whole immigration system needs to be streamlined so that it takes less time and is more approachable. Citizenship itself costs about $1,000 in application and service fees, but many people require the use of an immigration lawyer, which can cost between $5,000 and $15,000. Five years must pass between becoming a legal resident — also known as a green card holder — and applying for citizenship, which itself can take up to a year.

Parker also said that he doesn’t believe the vetting process for refugees needs to be reformed, saying it’s extensive, time-consuming and includes multiple face-to-face interviews. Batar agreed, saying that it’s the “most tough vetting process a human being can go through.” It can take as long as two years.

Batar said the U.S. needs to take a role in accepting refugees in a fair way that doesn’t single certain people out. Monson said he sees a consensus on reforming and streamlining the visa systems. The process of obtaining a green card, a visa for permanent residence, can last as long as 10 years in some cases.

Mathis said he thinks a lot of people would agree on a path to legalization. Unauthorized migrants already in the U.S. — who can be in the country for a vast array of reasons — don’t have a method through the regular channels of the U.S. immigration process to get a visa.

He concluded by remarking that despite the current backlash on immigration reform, drastic changes to the nation’s security will be made. Mathis, who recently spoke with legislatures in Washington D.C., reported that there seems to be consensus that some kind of a wall will be built along the U.S.-Mexico border — and there’s hope that a broad immigration reform will take place soon after.

He says this is because “candidly, [the wall] won’t do anything” to solve the problems today’s immigration system has and that, hopefully, this will make reform a priority.