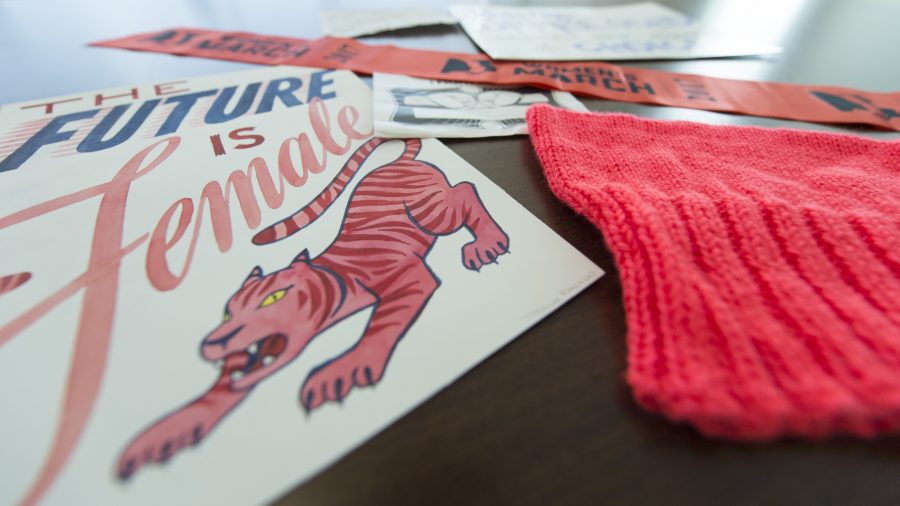 Women's march protest signs in a collection at the Marriott Library on campus on Tuesday, February 28, 2017 (Kiffer Creveling | The Daily Utah Chronicle)

‘No mandate for hate.’  ‘The future is female.’  ‘Refugees welcome.’  ‘Oversight: You’re doing it wrong.’

These are some of the words on posters and signs donated to the J. Willard Marriott Library in an effort to cement recent protests into Utah history. Following a steady stream of demonstrable outrage from Utahns, the library is encouraging students and community members to turn in posters, stickers and buttons from political protests to be archived.

“We are interested in items that take us back to [those] moment[s],” Huddleston said.

Marches like January’s women’s march on the Capitol, which had an estimated 6,000 attendees, are unique and significant, Huddleston said. “It’s definitely set a historic precedent for political engagement in the United States in recent memory.”

The women’s march is only one example of demonstrable outrage that has resulted from a new presidential administration and the beginning of a new legislative season. In February, a Jason Chaffetz town hall was overtaken by angry constituents who booed and heckled the congressman for 75 minutes.

“Do your job!” the crowd chanted.

People have turned in posters from the town hall, Huddleston said, as well as other rallies and marches that have taken place throughout the Salt Lake Valley — including on campus.

On Inauguration Day, a few dozen students walked out of class and marched to the Park Building to protest the inauguration of Donald Trump.

The walk-out was put on by Students for a Democratic Society (SDS), a radical progressive student group currently campaigning to make the U a sanctuary campus for undocumented students.

Unlike the march’s participants, the library has no political leaning or agenda, Huddleston said. It is merely interested in documenting these moments in history. If there are any right-leaning rallies or demonstrations, Huddleston said the library will collect from those events as well.

She points out most people think archives are for famous and rich people. However, this isn’t the case, she said. The library is interested in preserving everyday voices that are “important in the context of history.”

“Archives document the history of everybody,” Huddleston said. “By donating their protest signs they are contributing to preserving the history of the people.”

Other locations are collecting posters as well. Museums throughout the world, including the Smithsonian’s National Museum of American History in Washington and the Bishopsgate Institute in London, have been collecting protest materials from recent months.

Alison Conner, a reference librarian, said the archive project was “created for the present and the future.” By documenting social action on campus, student voices are preserved, highlighted and brought to public attention.

“We hope that in 30-40 years our efforts will be meaningful to the students and community members interested in this moment in history,” Conner said.

Students can donate signs by bringing them to Special Collections on the 4th floor of the Marriott Library or by contacting Julia Huddleston at 801-585-3076.