“Through Her Eyes” Gallery, “Through Her Words” Panel: Voices of Utah’s Female Journalists 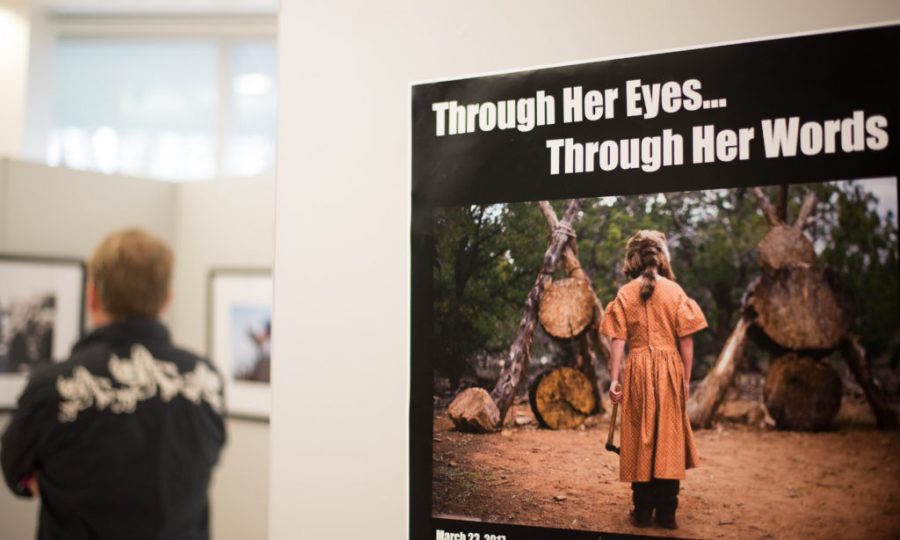 “Through Her Eyes” is a collaborative art exhibit celebrating Utah’s female photojournalists. It features shots from 20 photographers taken on assignment in Utah, accompanied by a text caption for each photo to elaborate on the story behind the photograph. The project has previously been showcased at the Salt Lake City Public Library, but recently found a new home at Salt Lake Community College’s south campus in the Eccles Art Gallery.

With this move came an artist reception and panel on March 23, titled “Through Her Words.” Women from various fields in media discussed and answered questions about their role in journalism and the experience of being a female journalist.

“It’s interesting because I don’t know what it means to be a man in this field,” said Whittney Evans, a reporter with KUER News. “Traditionally, it’s a male field. I think people are still getting used to the fact that we’re starting to see more female journalists, whether it be photographers, writers or reporters,” Evans said. “I’m lucky enough to be in the field of public radio where it’s obvious that they really appreciate females and minorities. I feel really lucky to be in a position like that where I feel respected. I’ve definitely had my share of moments, though.”

Kim Raff, a collaborator and freelance photographer featured in the “Through Her Eyes” gallery, said, “Journalism is a way that so many people in this world, people in our country or people in our inner cities and people throughout Utah understand the world around them and if they’re only hearing voices from one group of people or one gender, their understanding of the world around them is going to be skewed and that has implications on how we treat one another.”

Others recognized the importance of gender diversity in journalism as well, as many attended the panel. The gallery and artist reception received even more support than Raff expected. “We created a Kick-starter to raise funds and we had to shut it down after a week, because people were being so generous. I just thought, ‘Whoa, that’s too much money!’” she said.

The panel began with a discussion of numbers and why they matter. A 2015 study conducted by Women’s Media Center found in credits for print, Internet, TV and wire news, 62 percent of 10 major news organizations’ bylines were male reporters, while 37 percent were female reporters.

Hogsten is one of only four female staff photographers to have ever shot for The Salt Lake Tribune.

“When it comes time to go to conference finals, or any kind of tournament game, in 20 years, I’ve only been to two games out of 10 — one was for a conference game in 1999 and one in 2009,” she said, explaining that she shoots sports year-round. But “when it comes down to those kinds of games,” she rarely has the chance to go, which she attributed in part to her status as a woman.

Jones asked the participants questions about how being a woman has shaped their career and each shared examples of how it has helped, hindered or not factored in their ability to do the job.

“Sometimes being ‘the girl’ has helped me. It’s important to know what your resources are and use them appropriately,” Dobner said. “Is that wrong? I don’t know. My job is to get the stories. One thing I do know is there are always fewer women in every newsroom I’ve ever worked in. In one newsroom I worked in, I made $20,000 less than men with the same or less experience doing the same job and I was told the reason was that they had families. It was completely unfair.”

Dobner didn’t label every conflict as a gender issue, but said that many of them do stem from gender.

“As a woman journalist, I have to be really good at helping other women journalists be accepted as credible and competent, to make sure that I can cancel my own gender out as a factor in my decision-making,” she said.

The discussion concluded with audience questions and advice for women and other minorities in the field, as well as those aspiring to become journalists.

“As long as we show younger women and younger generations that they can do it too, then those women will step up to the plate,” Evans said. “We’re really passionate about what we do. Journalism is very hard, but we love it. I think it’s important to talk to young women about how important the work is and how welcome they are in this industry.”

Evans began as a journalist at 18 years old and explained she never had a female supervisor.

“I needed people who look like me and sound like me as role models,” she said. “I now see women around me and I’m optimistic.”

The “Through Her Eyes” gallery is at SLCC now until April 11 and is free and open to the public.