The Environmental Impact of Veganism 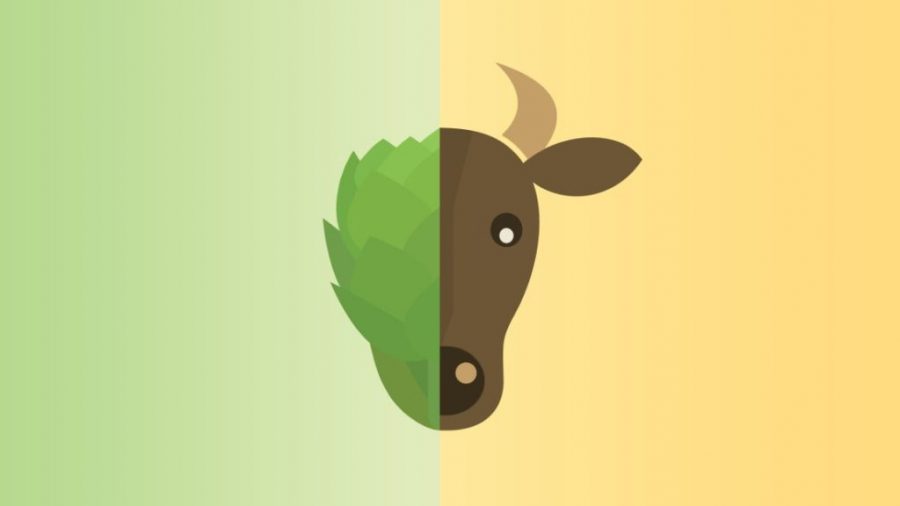 The environment is experiencing severe ecological devastation. Tropical species are on the decline, deforestation is rampant and American homeowners leave their sprinkler systems on continuously. Perhaps, as a conscientious steward of the planet, you’ve chosen to drive less or reduce water consumption. These small acts of material conservation will save the Earth from destruction, right? Well, despite environmental nonprofits asserting that climate change is caused by industrial expansion, the driving force behind climate change is something much simpler — meat production.

Let’s begin with the United States, which is known universally for its excess as a nation. According to The New York Times in 2015, “Per capita carbon dioxide emissions in the United States are about twice those of the other wealthy nations of the 34-member Organization for Economic Cooperation and Development. American obesity…is running at about twice the European average and six times the Japanese.” Those figures are rather alarming, and the situation has only worsened in the past two years. The fuel behind this overconsumption is a mix of cultural factors.

While Americans are generally optimistic about the capacity of technology to resolve any issues, the issues related to agricultural production are inescapable. Regardless of sprawling cities and landmark destinations, the U.S. is essentially one massive farm. The World Bank projects that in the U.S. alone, nearly 44.6 percent of the land is used for agriculture. Furthermore, more than 260 million acres of forest have been cleared for animal production, which accounts for “approximately 80 to 90 percent of U.S. consumptive water use,” according to the USDA. Globally, as Time Magazine reports, “Some 40 percent of the world’s land surface is used for the purposes of keeping all seven billion of us fed…And the vast majority of that land — about 30 percent of the word’s total ice-free surface — is used…to support the chickens, pigs and cattle that we eventually eat.” Therefore, while this industry has facilitated U.S. population growth, the pervasive nature of agriculture magnifies its effect on the environment.

Over the past several decades, there have been numerous efforts to reverse deforestation. Yet, as NPR reports, “from August 2015 to July 2016, the Amazon rainforest was deforested at an estimated rate of 7,989 square kilometers (more than 3,000 square miles). The year before, it was 6,207 square kilometers. Two years ago, it was barely over 5,000 square kilometers.” Although wood-related production contributes to this trend, the World Bank found that animal agriculture is responsible for “91 percent of Amazon destruction, with one to two acres of rainforest being cleared every second.” Encompassing vast swathes of Venezuela, Colombia, Brazil, Peru and Ecuador, the Amazon is equivalent to the ninth largest country in the world.

The increasing consumption of meat comes at a high cost. Each hamburger that originates from animals raised on rainforest land destroys approximately 55 square feet of forest. PBS reports that citizens in the U.S. consume nearly 50 billion burgers per year. The overconsumption of meat is damaging to health, as overindulgence can cause heart disease, cancer and obesity. According to the Scientific American, “…between 1971 and 2010, production of meat tripled to around 600 billion pounds while global population grew by 81 percent, meaning that we are eating a lot more meat than our grandparents.” With meat consumption projected to double by the year 2050, the environment will be severely strained for years to come.

Meat consumption affects more than just land — it also impacts the water. As Georgetown Law Review wrote, “…animal agriculture is the number one consumer of fresh water by a significant margin. Animal agriculture consumes on average 55 trillion gallons of water annually…On a micro level, it takes roughly 5,000 gallons of water to produce one pound of beef.” The harmful repercussions of meat consumption also extend into the water, contributing heavily to climate change. Overfishing has destroyed wildlife, leading to a general depletion of freshwater resources. The Food and Agriculture Organization of the United Nations (FAO) found that approximately 75 percent of the world’s fisheries are either exploited or depleted due to fishing. This will eventually culminate into a complete depletion of the areas currently fished by 2048, which could cause widespread panic amongst an expanding population.

While these figures are damning, they likely come as a surprise, even for those concerned about conservation. Despite the clear link between animal agriculture and environmental destruction, nonprofit organizations are hesitant to speak about the issue. In 2014, an award-winning documentary called “Cowspiracy” was released by a pair of veteran filmmakers. The film highlights various environmental groups — such as the Sierra Club — and their hesitancy to discuss animal agriculture. Indeed, the directors discovered that the animal industry is the de facto “third-rail” of food production — so ubiquitous that criticizing the practice would lead to a loss of support. Nonprofit agencies, which struggle to urge citizens to use less water, are afraid of acknowledging animal agriculture. Who would even try telling skeptics to cut meat out of their life?

Instead, nonprofits push for citizens to drive less, which is certainly a noteworthy goal. Yet, emissions from transportation vehicles pale in comparison to animal production, as the FAO also found that animal agriculture is responsible for 18 percent of greenhouse gas emissions. That is more than the combined exhaust from all transportation, which accounts for only 13 percent of greenhouse gas emissions. Furthermore, livestock are responsible for 65 percent of the emissions of nitrous oxide, which is 296 times more damaging to the planet than carbon dioxide. So, while driving less is one small step towards environmental conversation, it’s rather insignificant. To save the environment and preserve limited resources we need to greatly reduce the consumption of meat.

There are numerous types of diets that accomplish this goal, but the only one that completely eliminates animal products is a vegan diet. Even vegetarian diets contribute to the industry, as it allows for eggs and milk, which take hundreds of gallons of water to produce. University of Oxford researchers Peter Scarborough and Paul Appleby studied the benefits of various diets, and came to the conclusion that “dietary [greenhouse gas] emissions in self-selected meat-eaters are approximately twice as high as those in vegans. It is likely that reductions in meat consumption would lead to reductions in dietary GHG emissions.” Indeed, the largest influence that one can have on the environment isn’t using fewer material resources; instead, the key is to consciously avoid animal products altogether. Despite the immense amount of research that supports this notion, it’s important to remember one fact: meat consumption is the third-rail of food.

Reducing material consumption, such as turning off a sprinkler system, is a goal that everyone gets behind — regardless of political affiliation. These simple recommendations draw validation from friends and family. Driving less and choosing to walk or bike more is a rewarding practice. Yet, when it comes to actually saving the environment through dietary change, anger swells from even the staunchest environmentalists. It’s too much to ask, which is why nonprofits shy away from the issue. Vegans are cast as antiestablishment bigots. But understand that a vegan diet produces the equivalent of 50 percent less carbon dioxide, and uses 1/11 of the oil, 1/13 of the water and 1/18 of the land of meat production; the choice is clear. To truly address ecological devastation, and sustain the Earth’s expanding population, switching to a predominately vegan diet is not only important — it’s necessary.