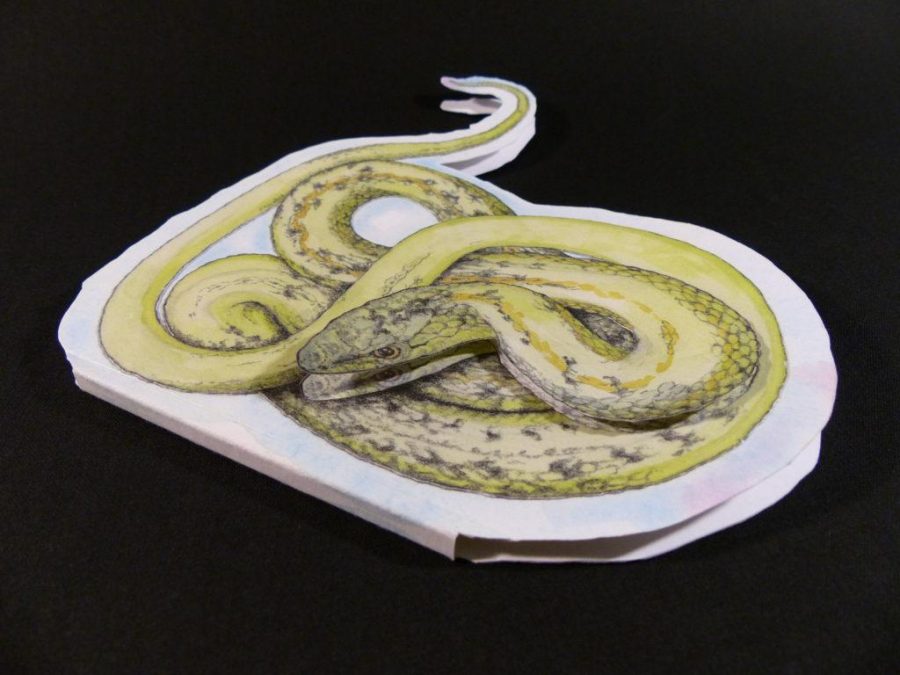 Wildlife is the muse of many artists, but University of Utah graduate Claire Taylor seeks not only to create beautiful works of art, but to take the viewer with her on a journey to confront human perception of animal life. In her upcoming May exhibit at the downtown Alice Gallery, Taylor will share work from her research on the human-animal binary.

Taylor works in mixed-media painting, mainly watercolor washed with colored pencil, but is also known for printmaking. She earned a bachelor of fine art in visual art with a printmaking emphasis from the U, where she worked as studio manager, instructor and lead printer in the Book Arts Program and Red Butte Press at the Marriott Library.

As Taylor developed a passion for wildlife, she enrolled in a second undergraduate degree in biology in the hopes to one day become a zoologist.

“While I was taking these [biology] classes, I found that I really wanted to make art about what I was learning,” Taylor said. “And something felt incomplete about not being able to make art while I was in class. I felt like something was missing so I ended up enrolling in the Environmental Humanities graduate program [instead].”

The wide-ranging nature of an environmental humanities graduate degree offered an atmosphere for Taylor to foster her love for art while furthering her passion for animal life.

“Most of the people in the program, when I was in it, were not artists,” she said, explaining how the curriculum for the degree allowed her to take biology classes but still incorporate her artwork. “It’s a choose-your-own-adventure type of graduate degree. [But] a lot of people in this degree are approaching some of these environmental problems from creative viewpoints, trying to find different ways to discuss it and seeking new ways to bring it into public awareness.”

Taylor’s upcoming solo exhibition features pieces from her master’s project and was funded in part by the Global Change and Sustainability Center and the Friends of Red Butte Creek at the U.

“It’s a project where I looked at my perception of and connection to wildlife I’ve happened to have encounters with,” she said. As she researched Utah wildlife for the exhibit, Taylor observed elk, mule deer, snakes, porcupines and insects such as honeybees.

“Going out with the notion I was going to analyze my perception and try to see if that perception could change was kind of strange for me, in that I was really terrified of snakes,” she said. “This project made me analyze my terror of snakes: Is it even logical? Am I afraid of any snake whether or not it’s actually poisonous? I eventually realized it was illogical.”

In the field, Taylor observed not only animals’ behavior toward her presence, but her behavior to their presence in an effort to bridge the divide between humans and other species.

“I care a lot about the environment,” she said. “I care a lot about it, not only for humans, but especially for wildlife and the way humans are affecting natural habitats. In my artwork, I try to visually express my perception of animal life and within that I’m also trying to see how I may be affecting them as a human being; and I think that’s something all humans should consider, or would do well to consider being environmentally conscious in what effects they’re creating on the environment around them.”

Taylor views her art as a resource to spread appreciation of wildlife and explained that it often takes an emotional connection to become invested in environmental consciousness.

“My goal is to hopefully make an impact in the way people consider other species, other living organisms outside of humans,” she said, “to see other species’ lives are just as valid and important and we don’t necessarily need to put humans on the pedestal we’re on. Hopefully my artwork can help change the perception of the human-animal binary.”

Taylor’s solo project will be featured May 12 through July 7 in the Alice Gallery at 617 E. South Temple in Salt Lake City. An artist reception will be held May 19 from 6-9 p.m. as part of the Salt Lake Gallery Stroll.