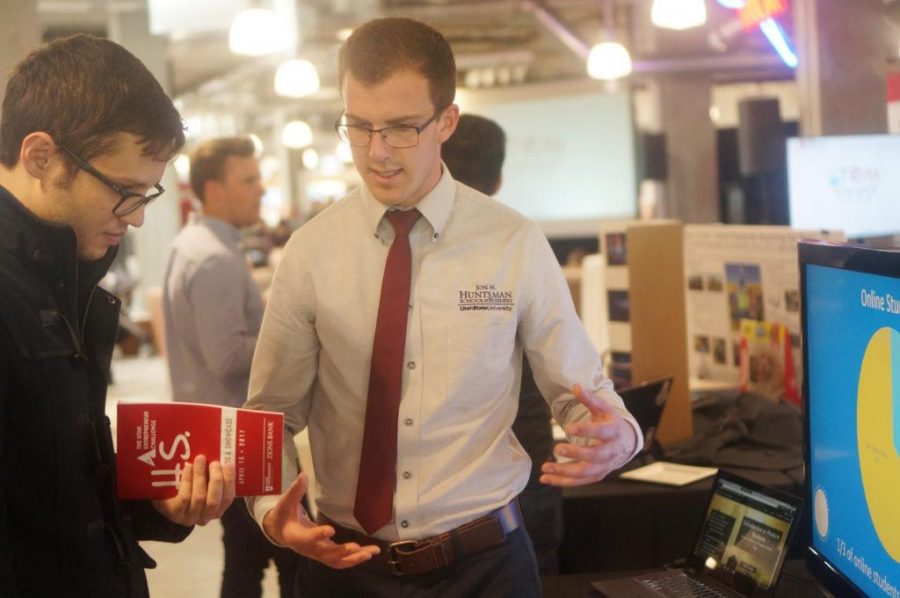 A student speaks about his start-up at the Utah Entrepreneur Challenge at Lassonde Studios in Salt Lake City on Saturday, Apr. 15, 2017. (Rishi Deka, Daily Utah Chronicle)

The Utah Entrepreneur Challenge (UEC) is hosted by the Lassonde Entrepreneur Institute, a subdivision of the David Eccles School of Business at the University of Utah. On April 15, 2017, entrepreneurs from across the state gathered at Lassonde Studios to find out who won the grand prize of $40,000 to launch their idea.

Lassonde Institute received over 240 submissions from college students in Utah schools, but judges only selected eight entries as finalists. The top eight competitors displayed their work on the first floor of Lassonde Studios while students, parents, friends, family and judges listened to their presentations.

The crowd was large and everyone seemed excited to hear about the students’ ideas. Onlookers settled in their seats as the awards were announced. Outside of the $40,000 grand prize, other cash prizes were offered, many based on audience voting. Portal Power won $1,000 for Best Speed Pitch, Pleth Patch won $1,000 for Excellence in Innovation and Xlynk Surgical won $5,000 for Best Presentation and $2,000 for Best Design.

At the end of the night, Rubi Life took home $40,000 for their wearable fetal heart monitor. Eric Stopper, a student at BYU and founder of Rubi Life, was inspired to create a device for watching fetuses’ vital statistics after his own family experienced a health scare. Stopper’s wife, now a mother, was unable to hear or feel her baby moving, but she had to wait to see her doctor to confirm if her child was still alive. With the grant, Stopper hopes to eradicate this wait time by developing an app to track a baby’s vital statistics and limit the risk of stillbirths.

While only one team could win the grand prize, every student involved had the opportunity to be mentored by business professionals. They also learned from the trials and successes of developing and launching an idea.

“I got tons of good feedback and experience handling a company under lots of pressure,” said Mica Sloan, the executive engineer of Portal Power, one of the top eight teams. “We got to practice pitching in what would have been a make or break situation under the safety of being in scholastic competition, with mentors and help along the way. I loved working with Lassonde and gaining new perspectives on entrepreneurship and innovation.”