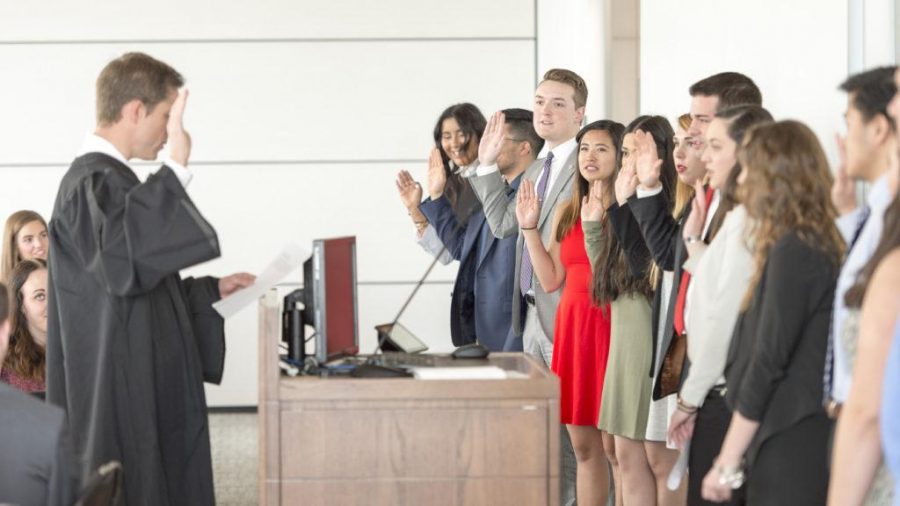 President Zach Berger, Vice President of University Relations Zoe Kozlowski and Vice President of Student Relations Saeed Shihab, along with assembly and senate members, were sworn in to serve the student body as part of the Associated Students of the University of Utah (ASUU) for the upcoming academic year on Wednesday.

Friends, family members and ASUU affiliates gathered at the S.J. Quinney College of Law Building to celebrate the transfer of power. The inauguration opened with speeches reviewing the last year by the 2016-2017 administration. Each speaker mentioned the bittersweet feeling that comes with giving up a difficult and rewarding job, and congratulated the incoming administration.

“There are going to be things that are going to go very wrong,” he said. “Accept that, and push past those hard things, because that’s when the amazing things happen.”

Other speakers at the inauguration focused on the successes of the past year.

Rachel Peterson, the Senate Chair for 2016-2017, said, “When I took my oath of office, I set two goals for senate — I wanted the senate to be more efficient and more transparent. I am very proud to say that we accomplished this goal.”

The senate restructured organization on campus in numerous areas through joint resolutions for finance, assembly and student organizations.

Parker Archer, the former Assembly Chair, corroborated Peterson’s speech with the success in numbers, saying, “We have passed 86 assembly bills and distributed over $80,000 to student groups across campus.”

The overarching goal for ASUU was to improve the way the organization functions and to make the U a comfortable and academically enriching place.

“We are all working for a higher purpose, to have every student get a signature experience at the University of Utah, and that’s what our role is,” said Chandler Dean, the new senate chair.

In order to continue to achieve this goal during the 2017-2018 academic year, new Assembly Chair Chelsea Sather announced changes made to the assembly. These include meeting in four committees rather than two, taking control of budget processes and cutting the size from 51 students to 36.

The administration were the last to take the podium. Both Shihab and Kozlowksi discussed their experience leading up to their new positions and their intentions to engage students and the community. Berger closed the meeting with a heartfelt speech that kept the audience laughing. He expressed his excitement to add “Student Body President” to his Instagram bio, as well as his eagerness to lead the U’s student body.

“With common purpose, and with passion and dedication, we look forward to the task and the year ahead of us. We are committed to the university and to our students, and we will work tirelessly for their benefit.”