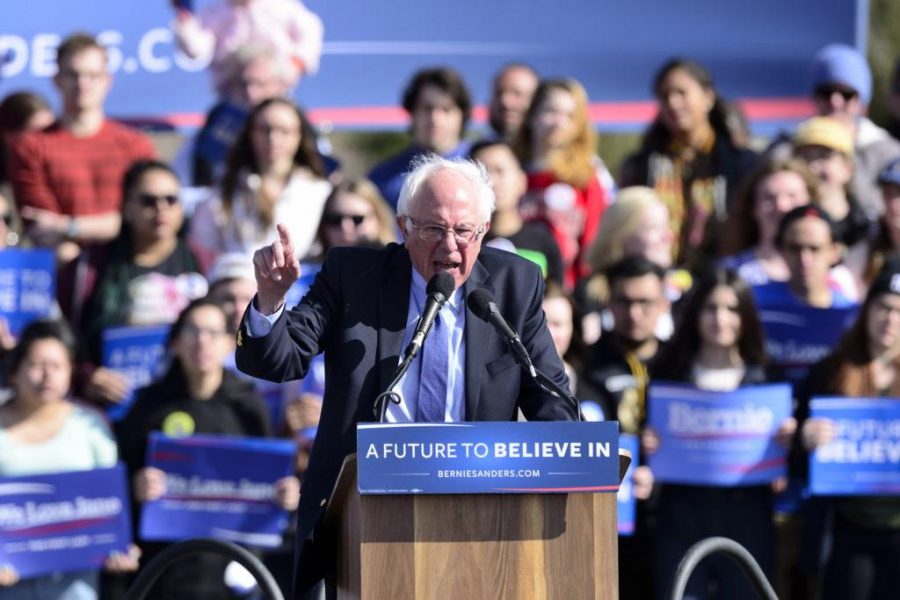 Thousands of people came to support Democratic Presidential Candidate Bernie Sanders at his rally at This is the Place Monument in Salt Lake City, Friday, March 18, 2016 | Chronicle archives.

Ever since this past election, it seems as though millennials and Generation Z have had a new found voice and entitlement in sharing their views on politics. Men and women born in the ‘90s and after now seem to have engaged more in political issues than any other generation. Why is this? With Instagram, Twitter, Snapchat, Facebook and any other social media platform, the circulation of information is at an all-time high. Does this allow the public an open window into the truth of what is actually going on in politics and the government? Or does this simply breed fake news, leading to distrust towards journalists and media outlets?

It is hard to give a definite yes or no to any of these questions. People typically line up on two sides of the argument: They think the government is becoming more and more corrupt as time goes on, and others believe that with social media and the internet’s capabilities we are just now able to see everything that happens behind closed doors. The internet has become more of a portal to the truth of what occurs in the government. Among this mass communication platform lies an enlightening, clearer view into not only the truth behind politics, but also the conspiracies and ideas many people have created, often backed with evidence and proof. With the internet as a massive information superhighway, we have seen a plethora of different opinions, theories, suggestions, media and information all at once.

There are many factual articles that bring to light important information about politics that would otherwise be unseen if it weren’t for social media. Back when the internet wasn’t available and people got their information primarily from print newspapers and television there was hardly any doubt of what was being reported in the media, because there was no outlet like social media that allowed for conspiracy theories or other information for anyone to share.

Politicians over the past few decades have had a reputation for cheating people, lying and making abandoned promises. Before the internet, politicians were better trusted and people tended to have more confidence in their parties. What is it that has made us so doubtful and untrusting towards the government? Many people believe that it is because times are changing and politicians are increasingly allowing money to dictate their decisions, and it then influences their motives. Politics has always been somewhat deceitful by the motivation of money among other things, but with the internet we are now seeing it more clearly.

The internet is not specifically a voice outlet for just politicians. Everyone can use social media and put whatever we want out there on the web. With this new information and communication platform we’ve created we decide what images, what messages and what moments get magnified. For example, over one billion people have a Facebook, and within Facebook there is a massive connecting web between friends and family. When an article is circulating around the internet our friend shares, we read it, and we form an opinion on something we wouldn’t have been able to without the help of social media.

In a scholarly journal written by Andrea Ceron for Computer-Mediated Communication, she combines and displays studies done proving the hypotheses that trust in political institutions should be lower among citizens who consume news from social media. “Some scholars consider social media as a virtual ‘agora’ for democratic debate that can foster decentralized citizen control as opposed to hierarchical elite control and help citizens evaluate the performance of the political system without the lens of elite media outlets.” The results from testing this hypotheses was that “the consumption of News from Social Media is associated with lower propensity to express trust in political institutions.” This brings me to the conclusion that maybe politics isn’t becoming more corrupt over time, but it has always been this way, and social media has simply shined a new light and perspective on it.