U Students Attend, Speak at Rally in Response to Racist Posters, Charlottesville Violence 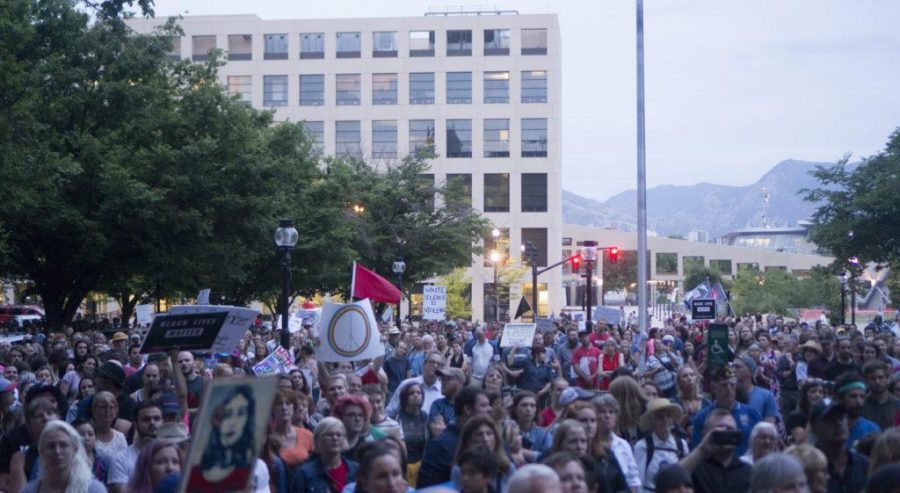 Upwards of 1,000 people gathered at the Salt Lake City and County Building on Monday to oppose a white nationalist rally that resulted in violence in Charlottesville, Virginia, and racist flyers posted at the University of Utah. The Facebook event called the posters “deplorable” and “heinous.”

“Donald Trump, can’t you hear, Nazis are not welcome here,” chanted protesters as they waited for the rally, hosted by the Utah League of Native American Voters, to begin.

The U’s Students for a Democratic Society (SDS) attended the demonstration. The banner donning the group’s name hung on the front of the stage as SDS member Brooks Bergmann took to the pulpit to explain the organization’s purpose and denounce white supremacy.

“SDS is a radically progressive student organization committed to waging the people’s struggle, and building solidarity in our own communities,” Bergmann said. “We are anti-racist, anti-imperialist, pro-immigrant and pro-worker.”

Bergmann told the audience that a member of another SDS chapter had their leg shattered when a car rammed into a crowd of counter-protesters in Charlottesville.

“The Unite the Right rally in Charlottesville, Virginia, was disconcerting for more reasons than the injury and death of our comrades. It represents the cornerstone in the organization of fascist politics in the United States,” Bergmann said.

Numerous speakers condemned anti-black posters hung in multiple places on the U’s campus, tying them back to the incident in Virginia and the current political climate.

“Trump has made white power groups and other hate groups feel legitimate and galvanized,” said Kathy Abarca, the director of Racially Just Utah. “We saw it at the University of Utah just a few days ago.”

“I love this state, but we still have challenges to overcome when students on our university campus have to come face to face with racist propaganda,” Hollins said. “People of color across this state experience institutionalized racism, discrimination and lack of support from their surrounding community. We must, we can and we will do better.”

“When I saw the despicable posters, it broke my heart,” Thatcher said. “There comes the hard part. The Constitution gives them the right to say it. There is no way for the government to prevent speech, so it falls to us to stand up.”

SDS feels that the U hasn’t done enough in its response to the flyers.

“When it comes to dissing racism, I think it’s clear the responsibility unfortunately falls to the students,” said Sean Taylor, a spokesperson for the group attending the rally. “I think they’re always going to come out with a fairly lukewarm statement about it, and then do nothing to solve any of the problems.”

After the U discovered the posters, it released a statement saying it “does not tolerate hateful speech or discrimination.” To do more, Taylor suggested the U expand affirmative action and become a sanctuary campus.

“All of these actions might not be a direct response to the racist posters, but they would prove that the university is taking action to solve problems of race on campus,” they said.

At one point during the event, SDS pulled its sign from the stage. Members said they removed it because they didn’t want their group associated with Utah Attorney General Sean Reyes or Utah Democratic Party Chair Daisy Thomas, who both spoke at the rally.

Counter-protesters could be heard yelling over speakers throughout the rally and a motorcyclist revved their engine and shouted at attendees while driving by.

The demonstration ended with attendees shouting, “stand up, fight back.”

Bergmann said, “This rally should not only be a call to alarm, not only to pose and hold vigils and to frankly, be pissed. This rally needs to be a call to look in the mirror and ask ourselves if we are ready.”