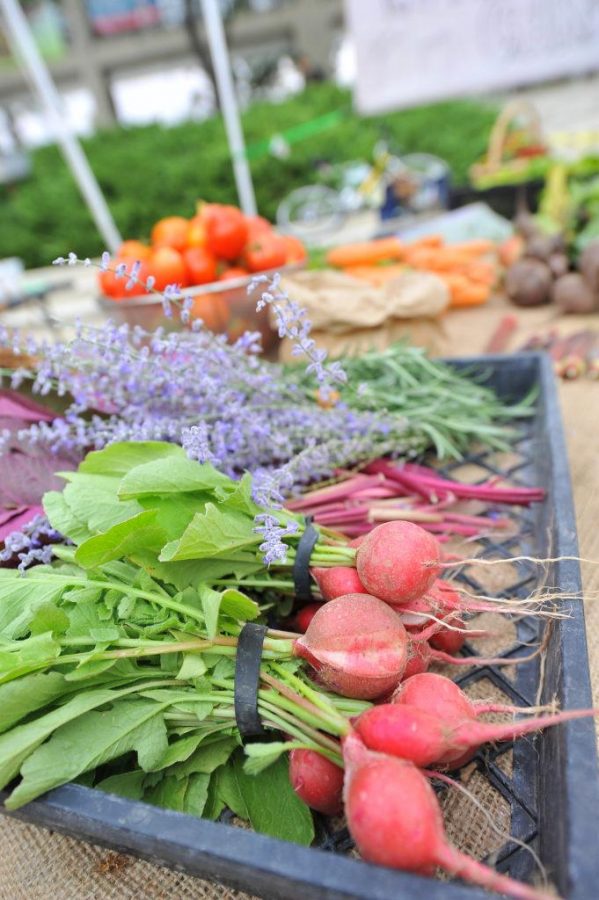 Radishes from the University of Utah Edible Campus Garden at the farmers market, put on by the Sustainability Office.

The University of Utah’s farmer’s market, which links local growers to the campus community, will celebrate its 10th season this year. Orchestrated by the U’s Sustainability Office, the market will host about 30 vendors each week at the beginning of Fall Semester.

The U is located in what is often known as a “food desert,” meaning that students living on or around campus have limited access to healthy and affordable food options. Organizers aim to fix this problem by providing local and nutritious produce to students while bringing the community together.

“I went there every Thursday last season to buy fresh peaches because I could never find them at the grocery store,” said sophomore Kaedyn Crabtree. “I loved that it was accessible and close.”

During the market’s first season in 2008, it was held in the Pioneer Garden — part of the Edible Campus Gardens near Pioneer Theatre Company. The market stayed in Pioneer Garden for the following year, but as demand and attendance increased, it needed a bigger location. In 2010, the student-driven market moved to Tanner Plaza where it has remained since.

“Being co-located with the Union has been a huge benefit to the market,” said the U’s farmers market manager, Ayrel Clark-Proffitt. “Not only is the Union centrally located, but the support of Union staff has been invaluable.”

The Union, located at the center of the campus, is known as a hub for students. Union employees help the farmer’s market with setup and accessibility for the disabled.

During its seven-week stretch, the farmer’s market will open once a week and have a rotating table of several campus partners, including the Bennion Center and Student Advocates. In addition to the campus partners, numerous off-campus nonprofits will also participate. One such group is The Green Urban Lunchbox, a volunteer group that finds sustainable solutions to hunger.

The vendors hosted by the farmer’s market sell more than just food. Shoppers can also purchase jewelry and crafts, which the U hopes will give students, staff and the public a chance to connect with artisans from across the county.

The farmer’s market’s 10th anniversary coincides with the Sustainability Office’s 10th year in operation. To commemorate the past decade of efforts to make the campus more environmentally friendly, the Sustainability Office has planned a birthday party at the Marriott Library’s plaza at the end of September. The event will provide food and host keynote speaker Vandana Shiva, an environmental activist.

Interns at the Sustainability Office will help with setup and coordination of the Edible Campus Gardens, one of the participating vendors.