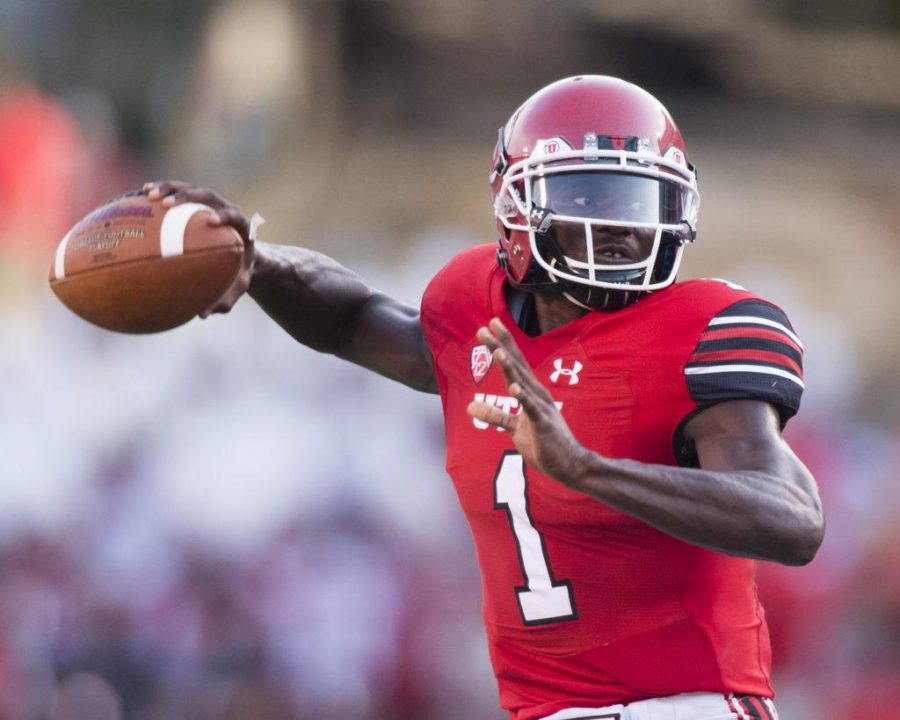 The University of Utah sophomore quarterback Tyler Huntley (1) looks downfield for an open man in an NCAA football game vs. The North Dakota Hawks at Rice Eccles Stadium on Thursday, Aug. 31, 2017 (Photo by Kiffer Creveling | The Daily Utah Chronicle)

10 – This is the tenth consecutive time that Utah has won its season opener.

10, again – Darren Carrington had a massive game, hauling in 10 catches for 127 yards and one touchdown. The last time a Utah receiver had 10 or more catches was in 2014 when Kaelin Clay had 10 against Colorado.

2 – No other Utah receiver besides Carrington had more than 2 catches during the game. The offense will need to spread the ball around a little more or defenses will start putting blanket coverage on Carrington.

5.8 – Zack Moss averaged a strong 5.8 yards per carry, just behind Joe Williams’ mark of 6.7 from last year, Moss looked more than capable of taking over Utah’s lead back duties.

79 – Troy Taylor’s new high-speed offense was on full display Thursday night as the Utes ran 79 plays on offense. (They’ve averaged 70 plays per game in their last 5 games against FCS opponents).

11 – Utah really struggled with penalties, particularly in the first half. The eleven flags thrown against them is more than they had in all but one game from last year.

1 – Utah had just one sack and one turnover throughout the game. Considering these are two stats that the defense has relied on in recent years, they’ll be looking to disrupt more plays next week against rival BYU.

5:48 – A good sign for any offense is not having to punt very much. Utah’s first punt of the game came with only 5 minutes left in the fourth quarter.

3 – After struggling to determine a starting place kicker throughout fall camp, coach Whittingham said that both Chayden Johnston and Matt Gay would get chances during the first game. While Johnston missed his first opportunity form 45 yards out, Gay connected on all three of his attempts (from 33, 32 and 49 yards).