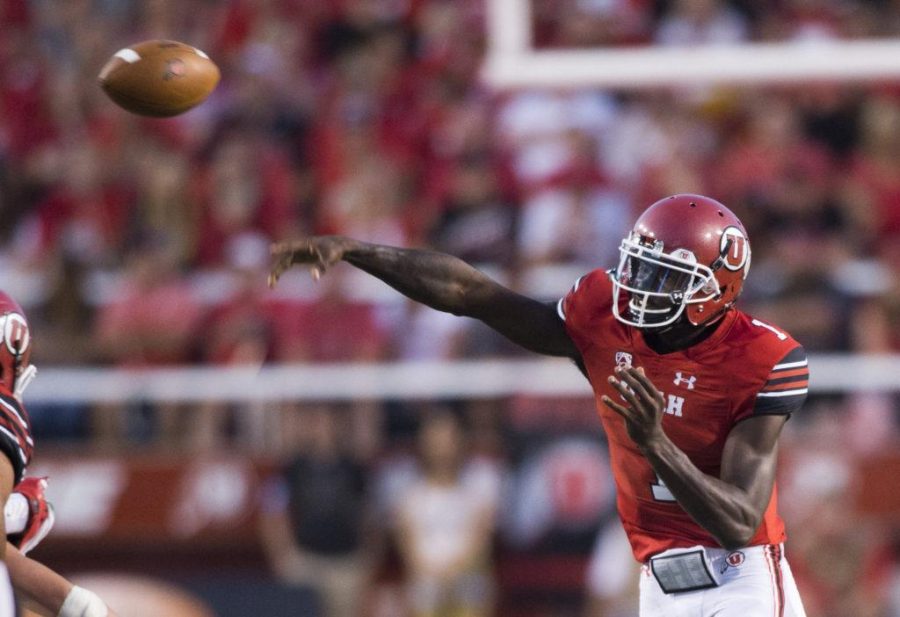 The University of Utah sophomore quarterback Tyler Huntley (1) throws the pass down the field in an NCAA football game vs. The North Dakota Hawks at Rice Eccles Stadium on Thursday, Aug. 31, 2017 (Photo by Kiffer Creveling | The Daily Utah Chronicle)

The Holy War returns to the gridiron on Saturday, Sept. 9 as the University of Utah (1-0) and BYU (1-1) will battle it out at LaVell Edwards Stadium. The Utes come into the contest riding a six-game win streak against the Cougars — BYU has yet to win a contest against Utah since 2009 when it won in overtime on its stomping grounds.

Under the direction of Utah head coach Kyle Whittingham, the Utes are 8-3 against its in-state rival, and they lead the series 59-34-4. However, BYU doesn’t count six games that were played against Utah when it was known as Brigham Young Academy, where both teams went 3-3.

Utah has played in 23 nonconference matchups since joining the Pac-12 in 2011, and it has only lost one of those games. The team hopes to not only build on its nonconference winning record, but it also wants to add another victorious year to its current winning streak for bragging rights against the Cougars.

Not only will this be quarterback Tyler Huntley’s first rivalry start, but it will also be his first trip to LaVell Edwards. When he takes the field under the stadium lights on Saturday evening, there is only one thing that will be on his mind, and it’s what he is looking forward to the most — beating the cougars.

“Nobody wants to lose,” Huntley said. “So we just got to go out there and win.”

Whittingham said Utah is preparing to take on BYU the same way it would prepare to take on any other competitor — “just like normal.” But with the Holy War taking place in September rather than November, like it use to be, there are still questions that remain unanswered this early in the season.

“The rivalry game in the past … was always the last game of the year,” Whittingham said. “You really knew exactly what each other was about, exactly who you had to stop and exactly what the strengths and weaknesses were and that’s another dynamic of playing the game this early, is there’s a lot of unknowns.”

This week, Whittingham wants to see Utah play smarter and more disciplined football than what it played in its season opener against North Dakota when penalties continued to get called. On the defensive side of the ball, he wants to see more takeaways and the defense getting the ball back to the offense in short field situations.

It’s not until near midseason when teams “gain true perspective” on other teams and themselves, according to Whittingham. But Utah defensive coordinator Morgan Scalley knows enough about BYU’s offense to know his defense needs to do two things against the Cougs: stop the run and play man coverage.

“Football is a crazy game,” Scalley said. “Especially in these rivalries, you have to understand that adversity is going to strike at some point. You may have early success and then they rattle off 14 points, and you got to be able to respond.”