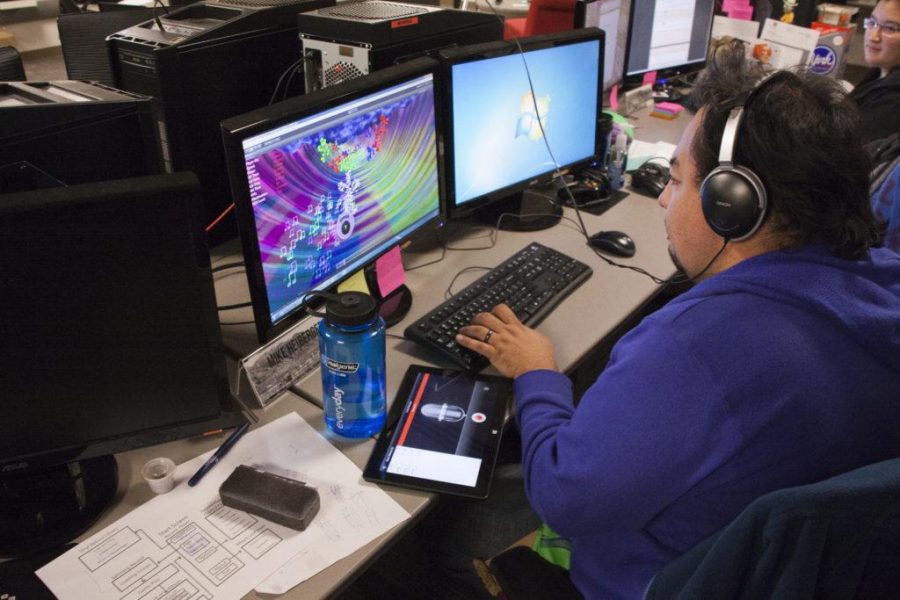 By Emily Anderson and Mackenzie McDermott

The University of Utah is hoping to take advantage of the growing gaming industry by offering a Bachelor of Science in games. The program proposal says would attract more high quality students to the school. According to SuperData, a group that researches the market for games and interactive media, gamers will spend more than 20 times what they do today by 2020, which amounts to $4.5 billion. Games account for nearly 70 percent of all virtual software revenue.

The program was proposed by the Entertainment Arts and Engineering (EAE) Interdisciplinary Teaching Program, and it would fall under the College of Engineering. The U’s Board of Trustees signed off on the new degree in June, but EAE won’t receive final approval until mid-September.

The School of Computing and Division of Film Studies created EAE in 2007 after they noticed a growing number of students who wanted to learn how to make games. The program welcomes students studying computer science and film. Over the past decade, EAE has offered a growing number of classes that hit on every aspect of the gaming industry — from the skills it takes to produce a game to the background of entertainment technology.

The U currently offers a master’s degree in EAE, but proponents of the measure feel a bachelor’s degree would allow students to have more in-depth knowledge of gaming upon entering graduate school or give them the option to pursue a job immediately after graduation.

The Princeton Review ranks the U third in the country among undergraduate schools for video game design. The proposal asserts that the new program would boost that rating.

Other schools in the state offer programs for video game instruction, but none are as comprehensive as a full undergraduate degree. The Department of Digital Media at Utah Valley University offers an emphasis in animation and game development, while Weber State University provides a game development certificate for students in computer science. Brigham Young University offers an animation fine arts degree as well as an animation emphasis in its computer science program. According to the proposal, however, all of these options either don’t adequately focus on game making or they only offer a slim selection of classes.

There are a number of students at the U who aspire to have a career in the game industry, but they struggle to assemble a course load that provides them with the knowledge and credentials necessary to pursue such a path.

“From the very beginning, we engaged with students who didn’t fit discretely into either [computing or film studies],” reads EAE’s proposal. “These students wanted to study the game creation process directly, including many that wished to focus on the technical intersection between programming and production art and were unable to do so given the structured offerings at the University of Utah at the time. The number of students wishing to engage deeply in this new discipline is steadily growing, but they lack the infrastructure, advising and support that is provided by such a path.”

EAE pointed some of these students to a Bachelor of University Studies, under which they worked with the program to assemble a schedule that would help them meet their academic goals. According to the proposal, seven students have graduated after taking this path, all of which have either accepted a job in the gaming industry or continued on to graduate school. At present, the majority of students pursuing a university studies degree are focusing their classes on game development. EAE argues that an official degree program would provide these students with a better learning experience and make them more attractive job candidates.

The program won’t only place students in game creating jobs, but EAE anticipates they will also be recruited by companies in other industries looking for their innovative technical skills. Some of these markets could include health care, defense, national security and K-12 education.

Students in the EAE program are currently recruited by big-name companies such as Electronic Arts, Warner Bros., Intel and Microsoft. Some of these companies wrote letters of support for the program to the U, saying a bachelor’s degree would expand students’ job options.

“As a strategic planner for Intel in the graphics/gaming space, I see continued growth of the job market for professional game developers,” wrote Randi Rost, the senior strategic planner at Intel. “This industry depends on university-level game developer education programs to continue to find and train the talent that drives the industry forward.”

There are at least 36 students currently at the U who EAE believes will switch over to the program if approved, according to the proposal. EAE information sessions attract hundreds of students looking to study game development from across the country each year. The proposal contends that the option to pursue a Bachelor of Science in games will persuade a much higher proportion of these students to apply to the U.

Although the degree program hasn’t been finalized, the proposal outlined what EAE believes a Bachelor of Science in games would look like.

Students in the program would be required to take seven foundational courses, after which they may choose 11 EAE courses, which they can tailor to their desired career path. They must also take four allied courses. The degree would demand 70 credit hours in addition to the U’s general course requirements. In their senior year, students would complete a capstone course in which they would develop and publish a game project that demonstrates their knowledge and skills.

“Coursework focuses on creating playable digital artifacts, teamwork and problem solving, critical and creative thinking, reflection and intentionality and building excellent communication skills,” the proposal stated. “All of these are practiced extensively with progressively complex challenges. Through the core coursework students develop a portfolio of work, as well as focus on the industry standard practices and methodologies necessary for careers in the interactive entertainment field.”

To be admitted to the program, students would be expected to complete 25 credit hours of prerequisite courses. They must also maintain a 2.75 GPA and pass all classes with a “C” or better.

The program would be the only one of its kind in the Intermountain West. In the proposal, EAE said the Bachelor of Science in games wouldn’t only equip students to develop entertainment, but it would also help students confront real-world problems.