When Should the Rivalry be Played? 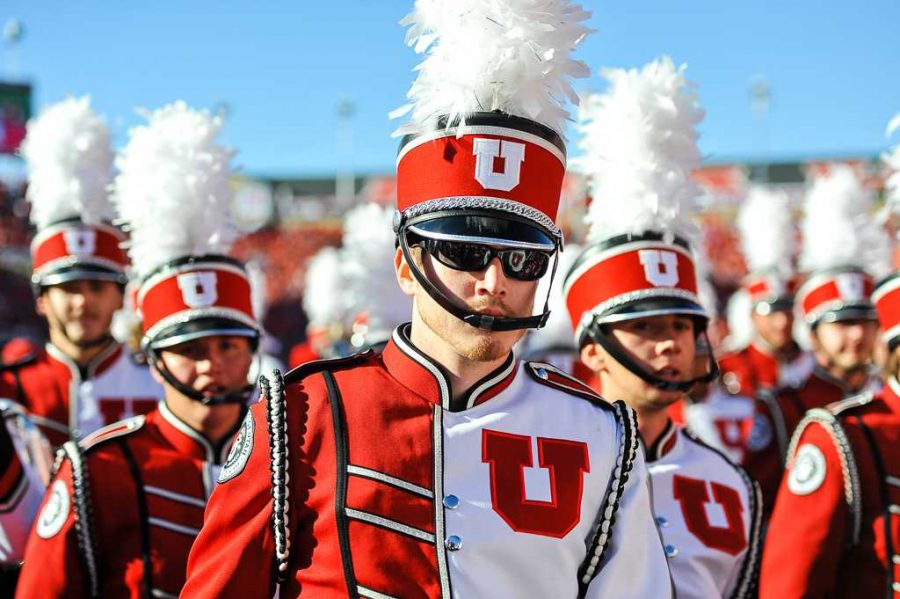 A member of the University Band walking off the field after the opening ceremonies at Rice Eccles Stadium. September 10, 2016 Adam Fondren

By Carra McManamon and Scott Funk

Tipping the Traditions of College Football
By Scott Funk

The Holy War is a competition that every person in the state of Utah looks forward to. It’s a matchup that constantly entertains. When do we desire that entertainment the most? After conference play, is it nice to end the season with a rivalry game? Or after a long offseason, is it best to begin the year with guaranteed entertainment?

Jan. 9, 2017, was the last time any college football fan watched a college football game. Dec. 28, 2016, was the last time University of Utah football fans saw their team on the field. After a long offseason, all fans are eager to see their teams in action. What better way to end the drought than a rivalry game? (Aside from Utah’s matchup with North Dakota.) Fans across the state get up for this game, come rain, snow or sun. There is no such thing as a “fair weather fan” when it comes to a rivalry game. Players and fans understand the importance of it, and everyone circles the date on their calendar, so we might as well make it happen sooner. There’s no sense of making anyone wait longer. Plus, if the trend continues the way it has been for Utah – that’s an entire season that fans own bragging rights.

As all Utah fans know, November hasn’t been a fan of the Utes, and the feeling is mutual. The past two years, Utah has been in the driver’s seat for the Pac-12 South, but it fell apart in November. Fans have watched the title fall right through Utah’s fingers. That November plague is no different when it comes to the series history against BYU.

Utah loves playing BYU in September and October, at least from what the results show. Since the first rivalry game in 1896, the Utes have a 4-1 record against the Cougars in September and a 28-2 record in October. The players are hyped up and ready to begin the season, and they go out and prove just that to their foes. Come November and December, the same team doesn’t show up.

The Utes are 0-3 in the regular season in December against BYU and 25-28 in November. Utah never plays its best football in November. Teams know it and take advantage of it. And there’s no doubt BYU has done the same.

Over the past 10 games between the two rivals, Utah is 7-3. Utah’s two wins in November were in 2008, the undefeated Sugar Bowl team, and 2010 when cornerback Brandon Burton made it in the backfield from the outside to block BYU’s game winning field goal to secure the 17-16 win. The Utes also had a win in December in the 2015 Las Vegas Bowl, where if BYU would have had one or two more possessions, that game could have ended differently. Their three losses all came in November.

Numbers don’t lie. A year is long enough to wait. Fans want the rivalry game sooner. Fans want the motivation from the game (win or lose) to carry them through the rest of the season. Entertainment will always be guaranteed, fans will say ridiculous things and college football will never disappoint no matter what month the game is played, but it’s better to have all of that sooner rather than later.

[email protected]
The Spirit of the Holy War
By Carra McManamon

Tradition has it that in college football, rivalry weekend is usually played in week 13. However, for the University of Utah and Brigham Young University football teams, that changed when the Utes switched conferences and BYU went independent in 2011.

When Utah made the transition from the Mountain West Conference to the Pac-12, Utah and BYU were no longer required to play each other. The two teams agreed to face each other during the span of 2011-13 before a bowl game reunited the two in 2015. The Utes and Cougars have met 91 times, and Utah holds a 58-34-4 advantage over BYU. Since the Utes left the Mountain West, they’ve dominated the rivalry. They’ve won the past six meetings, and that includes when the two teams met in the Royal Purple Las Vegas Bowl in December, 2015.

People have traditions they stick to. With the rivalry game being played near Thanksgiving, it allows for entertainment during family gatherings. Growing up in Washington State, I got to be around the Apple Cup game that’s between the Washington Huskies and Washington State Cougars. It was an experience like none other and something that Utah fans can relate to when it comes to the Utah and BYU game. Spending the entire week leading up to the game with family and friends and then being with them when game day hits, it’s an atmosphere that is full of competition and it is an irreplaceable experience. You spend all day preparing for kickoff. From waking up early, to tailgating and finding your seats at the stadium, game day activities are a tradition in most homes, especially in Utah.

When I think of rivalry games, I also think about the weather, as funny as that sounds. There is just something about getting bundled up with your friends and putting on as much gear as possible to stay warm during the game. From hot cocoa to hand warmers, it’s all about tradition.

By November, you generally have a good idea of how well your team is playing, but for some reason, rivalry weekend can change everything in college football. With the Utes winning the past six games, some might call this “just another game.” But for most fans, it’s an all-out battle.

The hype the game creates always lives up to its expectations. Sometimes playing in September means the game doesn’t have as much hype around it as it might later in the season. It’s still early in the year, and in September you can rebound from that loss as the season progresses and you can focus on conference action. But a loss in November could hurt your team more, giving you that much more to play for.

When it ultimately comes down to it, playing for the sake of tradition is why the rivalry game should be played in November instead of earlier in the season.