U Officials Respond to DACA Rescission 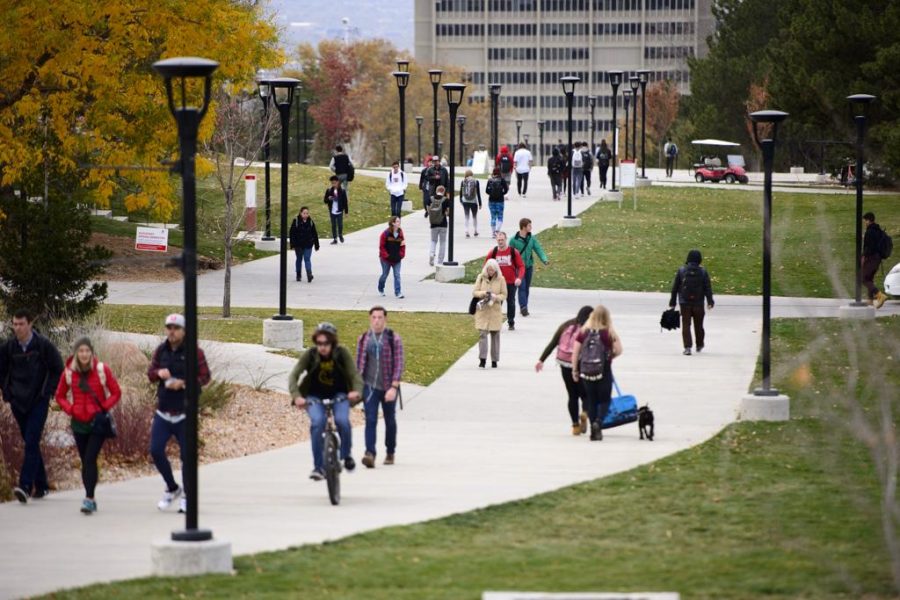 Students walking to and from class on campus at the University of Utah on Wednesday, November 16, 2016

In the wake of President Trump’s announcement Tuesday that he aims to end the Deferred Action for Childhood Arrivals (DACA) policy, officials at the University of Utah have voiced their support for an estimated 250 “Dreamer” students.

The DACA program, introduced by former President Barack Obama in June 2012, allows undocumented immigrants who arrived in the U.S. as children to obtain two-year work permits, thereby delaying deportation. The Obama administration introduced the policy after recognizing there were a significant number of undocumented children attending school and working in the country that had little recollection of life outside the U.S. There are approximately 800,000 individuals who have received protection under the program.

Hours after U.S. Attorney General Jeff Sessions’ declaration at the Justice Department, U President David Pershing said in a public statement that he is deeply troubled by the decision.

“I want you to know that the University of Utah is unwavering in its commitment to undocumented students (with or without DACA), many of whom are feeling tremendous fear and anxiety as a result of today’s decision,” Pershing said. “We are currently evaluating whether changes in federal law will have an impact on existing Utah law, and we will keep those impacted apprised of what we learn.”

As of Tuesday, the Department of Homeland Security stopped accepting new applications for DACA. However, current DACA recipients may continue to apply for renewal of their permits through Oct. 5 if they expire within six months of the announcement.

The U’s Dream Center, which works with undocumented students to ensure college access and provide support through graduation, will assist in looking over applications and offers a space for students to process the new policy.

“We have people obtaining Bachelors of Science, Bachelors of Arts, law degrees, graduated lawyers — all are undocumented,” said Alonso Reyna Rivarola, the Dream Program coordinator. “Of course, there is a lot of fear and anxiety.”

The six-month grace period before DACA’s cessation is intended to give Congress the opportunity to enact immigration legislation before any Dreamers lose permission to study or work in the country.

“Now, the future of DACA is up to our legislative leaders, and we, at the U, encourage them to recognize the talent and dedication of our students and the value they contribute to society by supporting legislation for them,” said Pershing.

Although he shares the concerns of undocumented students at the U, Reyna Rivarola is optimistic about these students’ future.

In conjunction with eight public colleges and university presidents, including Pershing, Utah System of Higher Education Commissioner David Buhler sent a letter on Wednesday to the state’s Congressional delegation to advocate for Dreamer students.

“We urge you to support a legislative solution as soon as possible to enable all students who have grown up in the United States to continue contributing to their communities and classrooms in ways made possible by higher education,” the letter reads. “Utah college students at our eight institutions known as Dreamers are working hard to better themselves and have deeply enriched their campus communities.”

At the end of his statement, Pershing included a link to contact information for Utah’s senators and representatives. He also directed those who are interested in helping DACA recipients at the U to donate to the school’s Dreamer Support Fund, which provides scholarships, emergency support services and works to expand access to opportunities for undocumented students.

“Having a diverse community is a core value at the University of Utah, and we welcome students from around the world,” Pershing said. “It is through this lens that we, as a research university, are able to grow and contribute to the knowledge that will lead us into the future.”