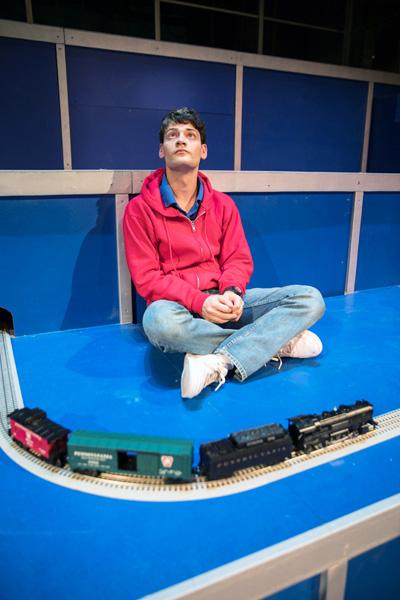 Pioneer Theatre Company throws open the doors with heart and talent in the opening production of its 2017-18 season, “The Curious Incident of the Dog in the Night-Time.”

Directed by Karen Azenberg, “The Curious Incident of the Dog in the Night-Time” is wonderfully saturated with talent and with deep humanity as the Pioneer Theatre Company depicts the phenomenal experience of Christopher Boone.

Based on the 2003 novel by British writer, Mark Haddon, “‘The Curious Incident of the Dog in the Night-Time’ focuses on 15-year-old Christopher Boone, a self-described, ìmathematician with some behavioral problems.” While the book and the play make no reference to any specific disorder or syndrome, Boone displays autism spectrum tendencies within his behavior and interactions with family and other people.

Winning both the “Best Novel and Book of the Year” as well as the “Commonwealth Writers’ Prize for Best First Book,” Haddon and “The Curious Incident of the Dog in the Night-Time” have made an impact within literature addressing the experience of being different from the dominant discourse.

The story was later adapted into a play by Simon Stephens. The play debuted in August of 2012 in Cottesloe Theatre by the Royal National Theatre, London, and opened in the United States in October of 2014 at the Ethel Barrymore Theatre.

Azenberg and company have successfully portrayed this story through a myriad of facilities. Opening on Sept. 15, “The Curious Incident of the Dog in the Night-Time” will run until Sept. 30.

Harrison Bryan as Boone will leave you speechless. Bryan’s attention to detail and his shockingly raw performance of Boone’s Asperger syndrome is the crux of this Pioneer performance. He is absolutely the star of this production. His authentic self-depiction of Boone’s journey fills you with sympathy, excitement and compassion. As a bonus, stay later after the curtain call for a final Bryan masterpiece.

Bryan succeeds and is also supported by stellar performances from his fellow cast-mates, namely that of Melissa Miller as Siobhan, Boone’s mentor at school and Tom O’Keefe as Ed, Boone’s father.

The interaction between Bryan and Miller is an underlying thrill. Miller’s steady performance of authority and kindness supplements her narration as she provides consistency, clarity and entertainment. She is concise and delightful.

The best moment of the play is facilitated by O’Keefe’s first appearance and the interaction he and Bryan share on stage during a particularly vulnerable experience for Christopher. O’Keefe’s honest portrayal of Ed as a dutiful and humane father, struggling to balance a dysfunctional family and raise a child with special needs adds a countering and welcomed dimension to Bryan’s performance. O’Keefe’s intensity and empathy bring the character of Ed to life with realistic and heartfelt passion.

With Chris Lino as the managing director, Karen Azenberg as the Director, brilliant scenic design by Daniel Meeker, clarifying lighting design by Paul Miller and authentic dialect coaching by Sarah Shippobotham, Pioneer Theatre pulls off another renowned performance. However, do be cautioned there is strong language content within the play.

Overall, “The Curious Incident of the Dog in the Night-Time” is a dramatic and moving depiction of a family and a community and one boy’s bravery. Pioneer Theatre Company has produced a brilliant production illuminating Haddon and Stephens’ work to full capacity in an enthusiastic and multi-talented portrayal.

“The Curious Incident of the Dog in the Night-Time” is playing at Pioneer Theatre from Sept. 15-30. Rush tickets are available to University of Utah students for $5 with a valid ID one hour before show time. For future performances, free preview tickets are also available to students the Thursday before opening night. Students are limited to two tickets per production. Additional information can be found on the Pioneer Theatre website at http://www.pioneertheatre.org/tickets/.