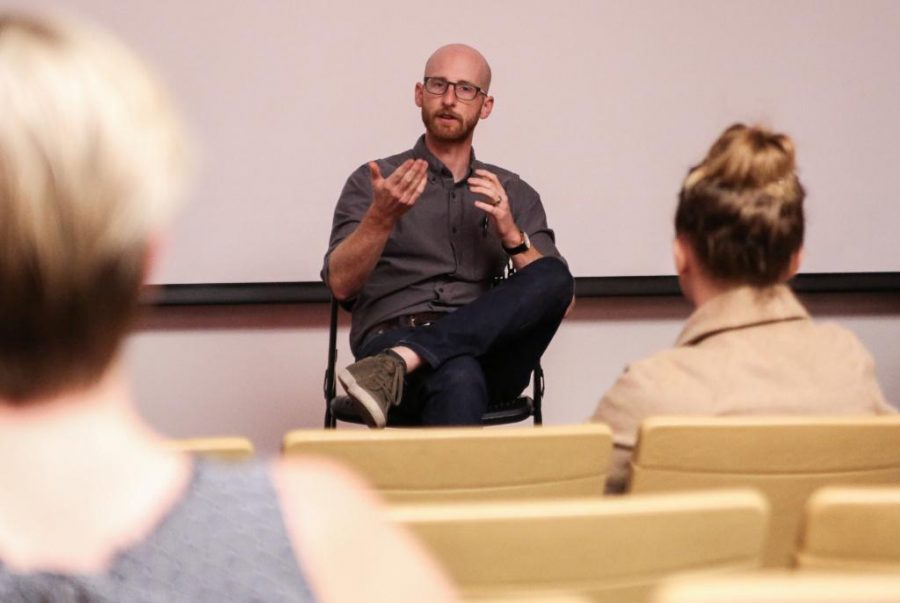 The event was organized by College Democrats at the U (CDUU). The handful of students who attended were each greeted by Kitchen personally.

“I’m feeling pretty good,” said Nick Jacobs, a senior in political science and economics who set up the event. “Turnout could be better, but also the club basically didn’t exist last year. You have to start somewhere and the students that are here seemed engaged, so I was happy with that.”

Jacobs moderated and opened the conversation by introducing Kitchen.

The District 4 council member, who is in the midst of his second year in office, got into politics when he and his now-husband sued the governor for marriage equality. Kitchen v. Herbert thrust Kitchen into the political spotlight.

“I have an interest in politics and policy,” Kitchen said. “I saw an opportunity and I took advantage of it.”

When Kitchen v. Herbert came to a close and made gay marriage legal in Utah, it was the 2015 election season. Kitchen was interested in breaking out of his role as a primarily LGBTQ activist and using his newfound popularity to discuss other issues.

“It was a really interesting opportunity to get out there and talk about issues that I care about outside of just LGBTQ-related social justice issues,” Kitchen remembered. “I talked primarily about economic development, being a small business owner, and affordable housing. Some of the issues that were arising in Salt Lake City at the time and continue to drive a pretty interesting dialogue are urban development issues.”

Some of the biggest concerns raised by students Thursday regarded the Rio Grande district.

“Homelessness is an issue that has consumed the lion’s share of my time as I’ve served in politics, and it’s heated up quite a bit recently,” Kitchen said.

Kitchen explained that following meetings with homeless service providers, the city decided to break up the city’s shelter into three smaller locations.

“What we have right now is one big shelter,” explained Kitchen. “So if you are a homeless youth or a domestic violence victim, or a man exiting incarceration, maybe you’re a sex offender, you all go to one shelter. What we learned from some of our data collection is that we’re actually not able to fully treat these individuals very well when you have this one-size-fits-all model. A lot of people fall through the cracks.”

Kitchen said the council is working to develop shelters that serve specific populations, including families, men, youth, domestic abuse victims and veterans to supply those groups with the resources they need.

In light of Operation Rio Grande, which included a law enforcement crackdown in the Rio Grande neighborhood, concerns at the U and in the community are high. Although the Rio Grande area is made up of predominantly homeless individuals seeking help, it has become a hub for the local drug trade. Kitchen emphasized that these two groups are not the same.

One of the goals of Operation Rio Grande is to connect homeless individuals struggling with addiction to recovery programs. By the end of 2017, there will be an additional 200 treatment beds for people suffering substance abuse and mental health issues — an amount that Kitchen believes will still be insufficient for the community’s needs.

Kitchen touched on affordable housing and its impact on homelessness. Salt Lake City’s population is expected to double in the next 25 to 30 years. Already experiencing a supply and demand dilemma that drives up housing prices, the city put aside $21 million toward affordable housing. Kitchen still fears that the housing supply will come up short and is hoping to leverage funds on the bond market for a $100 million affordable housing bond.

Planning for the predicted growth, the city is discussing plans for citywide long-range bus and rail. The question of funding is still on the table.

Nearing the end of the conversation, Kitchen said Salt Lake City struggled to come up with a budget after experiencing significant federal budget cuts.

Kitchen went on to discuss what he would spend the budget on, if it were up to him.

“If I were king for a day, I would spend taxes to fund things like early childhood education,” Kitchen said. “It’s a lot more expensive to treat people who have fallen down rather than just prevent them from falling in the first place.”

He encouraged students to use Open City Hall, an online platform that students can use to dive into issues, provide feedback and ask questions.

“Politics is a community sport,” said Kitchen. “I think everybody is strapped for time. Especially in the era of Trump and very poor civic engagement, it’s your responsibility to show up. So do come to city council meetings and take your two-minute public comment period and provide your input. Write emails to me or your city council member or the mayor.”