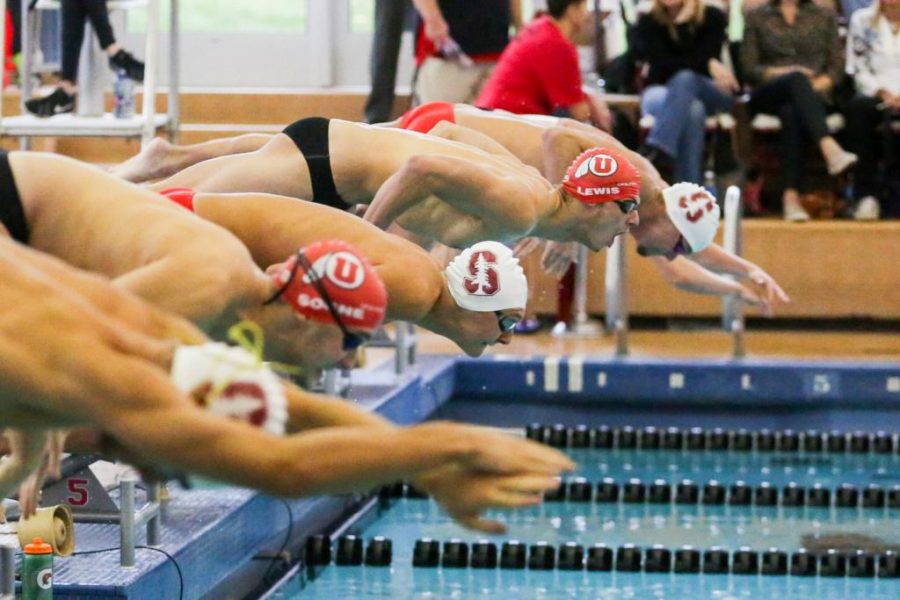 Sophomore Brody Lewis starts out of the blocks as the Utah Men and Women's Swim and Dive Team take on the Stanford Cardinals at the Ute Natatorium in Salt Lake City, UT on Friday, Oct. 20, 2017. (Photo by Curtis Lin/ Daily Utah Chronicle)

For the second consecutive week, the University of Utah swimming and diving team hosted a Pac-12 opponent. On Friday, the reigning conference champion, Stanford, was in Salt Lake City for a meet in front of a packed Ute Natatorium.

“First thing I want to point out is the energy and atmosphere here today,” said head coach Joe Dykstra. “We normally draw a pretty good crowd, but today, to have hundreds of alumni and pack the place full of energy and Utah passion, was really special.”

Both the men’s and women’s teams were looking to bounce back after losing to California this past weekend.

The men’s diving team had a solid start early on with senior Nathan Makarewicz garnering the top score of 318.38 in the 1-meter diving event. This came a week after Makarewicz won both the 1-meter and 3-meter events against Cal.

“Nathan won the one-meter which is great, you know it’s some of the best competition in the Pac-12 that he beat out today,” said head diving coach Richard Marschner. “He has an injured back so he couldn’t even do 3-meters, [but] I was really happy with his effort, thought it was great.”

On the women’s side, freshman Emma Ruchala finished in second place in the 1-meter event with a score of 268.43. Marschner said she had a strong performance in her second meet of her collegiate career, which pleased him. Although it is still early in the season, Marschner said the Utes are already making improvements.

While the divers took care of business Friday afternoon, it was a different story for the swimmers.

“Unfortunately, on the swimming side we got our butts kicked a little bit today,” Dykstra said. “I mean [Stanford is] the No. 1 and No. 3 (women’s and men’s respectively) for a reason. [Stanford is] very good and very deep, but overall we looked like a tired team. That’s okay in October. We had some great individual performances and certain bright spots today.”

Those bright spots included freshman Felix Chiun tying for first in the 100-yard freestyle with a time of 46.15, and junior Chris Taber who also came in first as he finished with a time of 1:50.76 in the 200-yard butterfly.

There were also several standout freshmen women Utes. Freshman Emma Broome came in at 2:05.42 in the 200-yard backstroke, narrowly edging out Kim Williams of Stanford for first place, while freshman Sara McClendon earned a second place finish with a time of 5:04.71 in the 500-yard freestyle.

“On the women’s side, our first two meets were against No. 2 and now No. 1,” Dykstra said. “On the men’s side, it was No. 1 and now No. 3. It’s tough. I mean, we aspire to get up to that level. It’s a slow process in our sport, it doesn’t happen overnight, but I’m pleased with the way our freshmen raced last week and this [week].”

Up next for the Utes, they will attempt to win their first conference meet of the season when they travel to Tempe, Arizona to face Arizona State on Saturday, Oct. 27 at 5 p.m. MT.