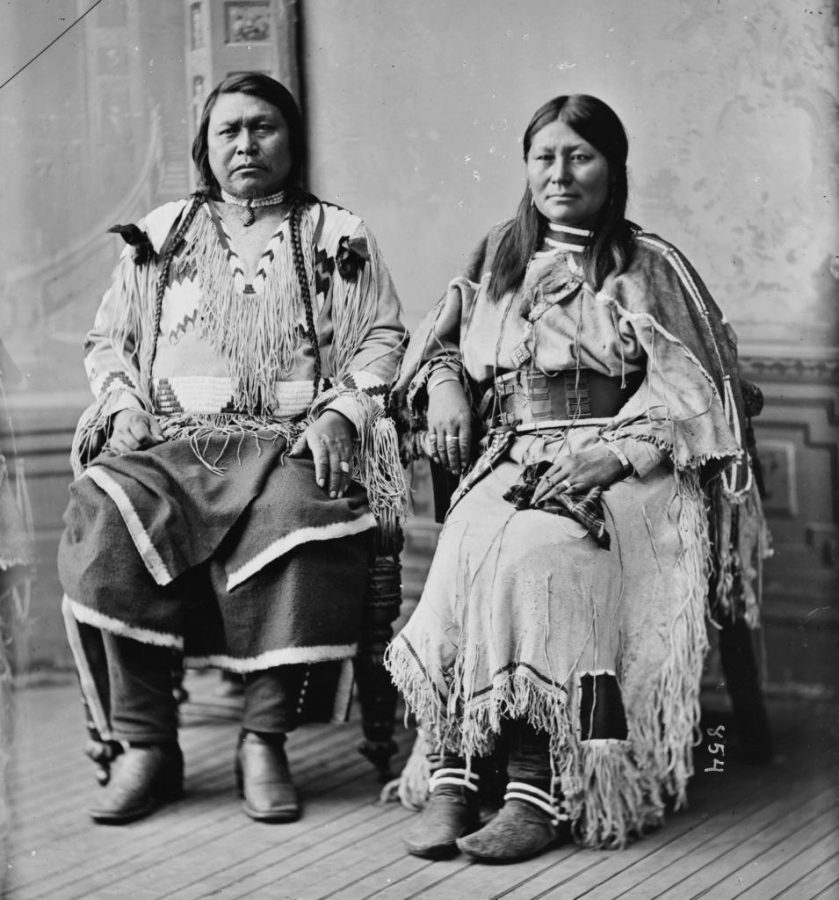 I recently visited The Natural History Museum of Utah which features a year-round exhibit called “Native Voices” that includes relics and history of the Native Americans. “Native Voices” primarily features tribes in Utah and surrounding states—Ute (Nuche), Shoshone (So-So-Goi), Goshute (Newe), Paiute (Nuwuvi) and Navajo (Diné). This exhibit does an excellent job of connecting the past and the present histories Native Americans. Native Americans are the indigenous people of this land and the conflicts, wars, diseases and massacres of the past have left less than a third of their original population alive today. The struggle and survival of the Native Americans continue  where reservation lands are sparse and the relationship between the U.S. Government and the Tribal Governments have a long and complicated history.

“Native Voices” is set up in a circular fashion with an outer and inner wall with partition in between, similar to an amphitheater. The focus is a television screen on the south wall that shows videos of descendants of Native Americans and current tribe members talking about their lives and history. The entrance to this exhibit has a glass case full of relics from the many Native American tribes all over the U.S. On the opposite wall the exhibit’s name, “Native Voices” is displayed, with an introduction featuring a replicated map from 1890 showing where tribes and their languages originated. The exhibit tells the history of Utah’s Native American Tribes, their cultural identities and past leading up to 1847 when Mormon Pioneers came and took land. The events that followed included battles and massacres of the Ute, Paiute and Navajo people. It also provides information on the Indian Wars and the laws that were passed by the U.S. Government geared towards assimilating the Native Americans and creating reservations (1851 Indian Appropriation Act, 1887 Dawes Act, 1924 Indian Citizenship Act, 1934 Indian Reorganization Act, 1953 House Concurrent Resolution 108 and the 1975 Indian Self-determination and Education Act.) Throughout the exhibit, there are quotes from tribe members and Native American descendants that add to the experience of communicating with a living culture that strives to survive and create a space of learning and respect for future generations.

The second largest reservation in the U.S. is located at Fort Duchesne, Utah’s Uintah & Ouray Reservation which is home to many of the Ute Tribe and others and is approximately 4.5 million acres (utetribe.com.) Tribes have their own government, laws and businesses that help to sustain the reservation and its citizens. It is crucial to understand the history of reservations and the relationship the U.S. Government has with creating a space in which they can control and subjugate the Native Americans. In 1953, the House Concurrent Resolution 108 sought to impose U.S. laws and responsibilities on reservation citizens, making them the equivalent of U.S. citizens but rejecting any tribal power and forcing tribe members into American society. Actions like this did not only happen in the past but continue today—the controversy over Bears Ears National Monument and a recent attempt at land-grabbing by Congressman Rob Bishop in 2016 that sought out to claim over 100,000 acres of Ute Reservation land (utepac.com.) With knowledge of these events and the current happenings on Reservations, Utahans can become more aware of their role in helping to protect and promote the rights of Native American descendants and tribe members.

Walking through the exhibit and looking at the handmade relics of these tribes closes the space between history and living cultures of the present day. The exhibit lives on the top level of the Museum and gives much need appreciation, education and attention to Utah’s past. It is important to acknowledge America’s complicated and brutal history, especially during times of the year when we are reminded as Americans of our colonial past.

Holidays like Thanksgiving and Indigenous People’s Day (formerly Columbus Day) should not be the only times when we nod our heads to the past in recognition. We should be knowledgeable of the current conditions and issues that occur when it comes to the Native American rights and reservations. We should be active in learning the histories of other indigenous peoples and events in America’s history such as the Mexican-American War and the Spanish Conquest of the Americas. It is the appreciation of the multiple cultures and peoples that make up the U.S. population that allow us to learn from one another and work together to create a better future. After visiting the “Native Voices” exhibit I was instilled with hope for a future where we respect various cultural identities and pasts while providing awareness and knowledge of the complex history of the U.S. to future generations.

Admission to The Natural History Museum is FREE for students, faculty and staff of the University of Utah with a valid U ID.

If you are interested in this exhibit at The Natural History Museum I also recommend the Shoshoni Language Book Exhibit at the Marriott Library on Levels One and Two which are located in the display cases until January 28. This event is in collaboration with the Shoshone and Goshute elders and tribal youth to create fun, bilingual books.