Bob Woodward Talks Watergate, Restraint, “Final Exam for Democracy” at the U 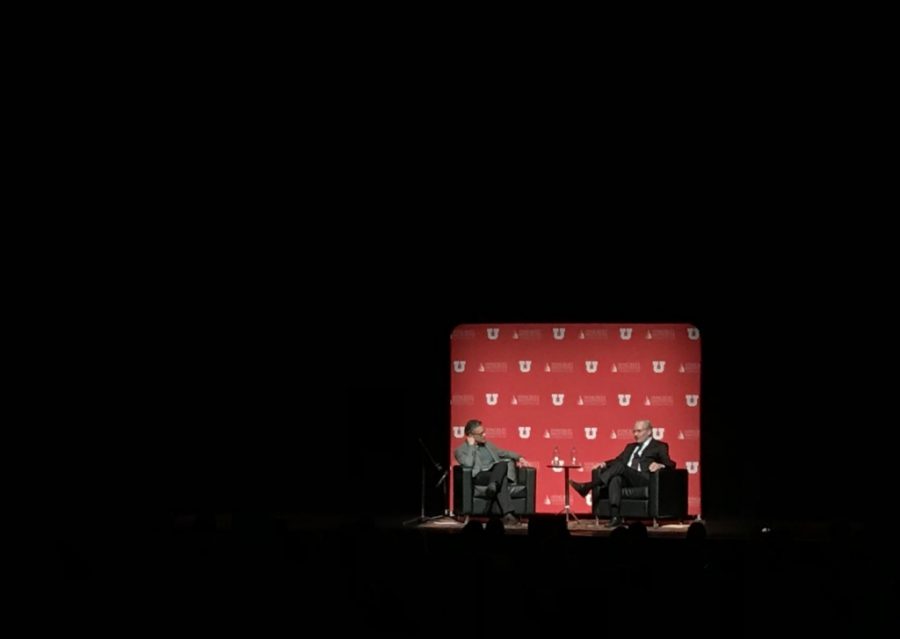 Investigative journalist Bob Woodward spoke at the University of Utah on November 16, 2017.

The Hinckley Institute of Politics hosted a discussion between local radio figure Doug Fabrizio and journalist icon Bob Woodward on Nov. 16. Named 2017’s Hinckley Fellow at the event, Woodward discussed his career and involvement in the Watergate scandal, and what he thinks of politics and the press today.

Woodward has been an investigative journalist at The Washington Post since 1971, but he is most well-recognized for his work breaking Watergate in the early days of former President Richard Nixon’s administration.

He was not originally interested in journalism but grew up as a janitor at his father’s law offices — aspiring to work as a lawyer. He would climb to the attic and read disposed documents detailing legal issues of the people living in his town. Woodward was later accepted to Harvard Law School but chose not to attend, applying for a reporting position at The Washington Post instead. He said the paper put him on a two-week trial, during which he wrote about a dozen articles. None of them were published, and he wasn’t hired, but by the end, he said he knew he wanted to be a journalist.

After writing at a smaller newspaper for a year, he joined the staff at The Post on the night police beat. Woodward worked from 6:30 p.m. to 2:30 a.m. the next day, but he said he loved it. He would sometimes go home to sleep for a few hours and then come back during the day to write more articles.

The original story that led to the infamous scandal was that of a relatively simple break-in at the Washington headquarters of the Democratic National Party in the Watergate office complex. However, the story became strange very quickly.

Woodward explained The Post was looking for someone “dumb enough to come to work” on a Saturday morning in June. He said, “my name was at the top of the list.” He had been working there for nine months.

That day, he and co-worker Carl Bernstein went to the courthouse to see the five burglars arraigned. When they came into the room, he said they were all wearing suits.

“Now, I’d been covering the police for nine months and burglars didn’t have business suits.”

“And the judge asked the lead burglar…’Where did you work?'”

Woodward said the burglar, James McCord, whispered that he worked for the CIA.

At the discussion, Woodward called McCord “a walking disposed file,” like those he would read in his father’s law firm.

There were over two years between that first article and Nixon’s resignation. The basics of the story that Woodward helped uncover were this — from January to March of 1972, officials in Nixon’s presidential campaign discussed an intelligence plan against the DNC, which included a plan to burgle the headquarters with the intent to take photos of campaign documents and install bugs to record audio. The June break-in wasn’t actually the first, but the second — to fix malfunctioning microphones that had been installed a month earlier. During the investigation, Nixon ordered the CIA to stop the FBI from looking into the origins of the burglar’s funding, but it was eventually traced back to his campaign.

Woodward said Nixon and his campaign’s actions were fundamentally “about subverting the election.”

At Thursday’s discussion, Woodward called the newsroom “the life force, the life blood in this country,” and spoke about the importance of restraint in the press — both during his investigation into the Watergate scandal and today.

During the investigation, both Woodward and Bernstein suspected that Nixon would be impeached, but he said they decided never to use that word because they needed to be “rigorously empirical.”

In today’s political situation, in which some writers opine articles of impeachment may eventually be drawn against President Donald Trump, Woodward encourages that same restraint, saying it “always works.”

“There are a lot of unanswered questions,” Woodward said. “I think it’s very serious. Who knows where the story is going. I think there is a little unhinged emotional reporting on both sides, and I think it’s not good for the reporting business.”

He said he feels that Special Counsel Robert Mueller’s investigation into the ties between Trump’s campaign and Russian involvement in 2016’s election will find the truth of the matter. He recently spoke to someone who knows Mueller personally. When Woodward asked what he was like, the individual joked that Mueller would prosecute a person for removing the tag from a mattress.

Restraint didn’t keep Woodward from reporting the truth during the Watergate scandal, but it meant that he took the time to talk to the same people repeatedly trying to get them to answer questions and that he found documents to back-up the story he was being told. He finished with thousands of hours of recorded interviews.

In 2016, Woodward interviewed Trump. He said he made a mistake at the time in not accounting for the feelings of frustration with government inactivity “at the red hot center” of many voters in the nation, but that he felt Trump had a chance at winning as election day approached. In the interview, Trump told Woodward and Robert Costa that he was “the lone ranger” and that, “real power is — I don’t even want to use the word — fear.”

Woodward called that “one of the keys” to Trump’s personality, saying Trump’s wielding of fear as a motivator and former President Barack Obama’s method of using power are extreme opposites of one another.

Giving another example of a time he was wrong, Woodward spoke about his initial certainty in the ’70s that former President Gerald Ford’s pardon of Nixon was “the final corruption of Watergate.”

However, when he interviewed Ford over two decades later, Ford explained that he pardoned Nixon in order to avoid the Watergate scandal dragging on longer and distracting the nation from other important issues ahead of it, like the Cold War and economic downturn. Woodward said he believes the pardon cost Ford any shot at a second presidential term. Ford was subsequently awarded a Profile in Courage for sacrificing his political career in order to do something in the national interest.

Woodward explained, “I had to be honest with myself. There’s Gerald Ford, beaming, vindicated. For me, what a cold shower, because I knew in 1974 this was the essence of corruption … Instead of corruption, it [was] courage.”

In today’s political climate, Woodward stressed that there is much the nation doesn’t yet know about what went on behind the scenes during the 2016 presidential election, and the work ahead for journalists will be very difficult.

“The ones who matter — their not knowing matters the most — are reporters.”

He stressed that the press needs to work hard to sift through all the information empirically.

“My real worry is … Look at everything that’s being tested — the Republican Party, the Democratic Party, the Presidency, Congress, the media. And my final thought on it is that this really is the final exam for democracy.”