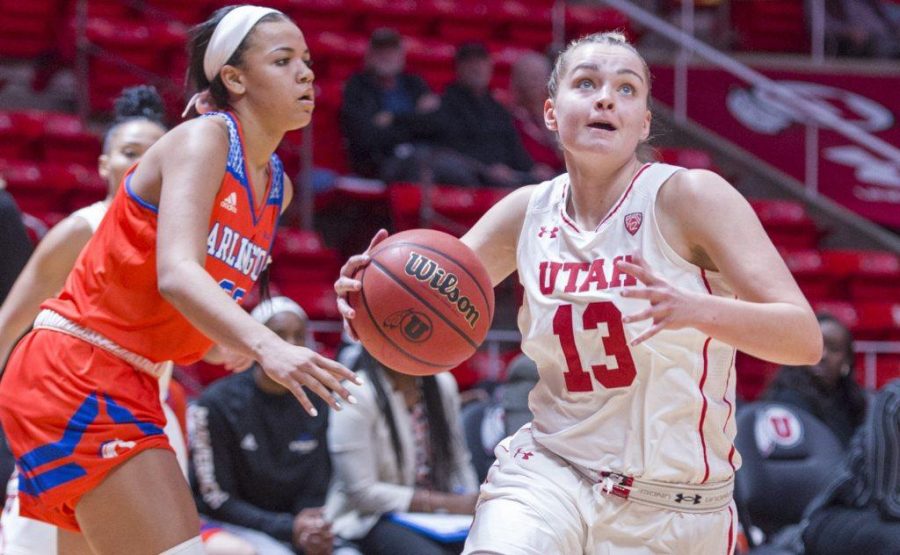 After a four day break from games, the University of Utah women’s basketball team (5-1) is gearing up for a home match-up against Saint Mary’s on Saturday, Dec. 2. The game will test the Utes’ defense versus the Gaels’ No. 24 ranked scoring offense.

Utah remains undefeated at home this season (4-0) and in order to remain unbeaten the team will have to take into account leading scorer Stella Beck, who is one of three Gael players scoring double digit figures. Saint Mary’s as a whole has been able to put up an average of 84 points per game, which is slightly above the Utes 79 points per game.

“They’re big, and you know, I was in that conference for years,” said head coach Lynne Roberts. “And so I know that team. I know that staff really well. They’re very well coached. They do a good job.”

Utah will look to Megan Huff to make her presence known in the paint. Roberts noted that the path to a victory for Utah is through the middle and into the paint.

“It’s going to be a test rebounding-wise. They rebound hard,” Roberts said. “They’re just big, physical, strong and relentless. So we’re going to get tested there. That’s going to be a key to winning. And then they just kind of run their stuff, they’ve got really good post play. It’s going to be a physical game on Saturday, I can promise you that.“

Freshman Tori Williams has been making plays for the Utes as she has been averaging 3.5 assists per game in the past four contests. Her 20 assists overall ranks her No. 14 in the Pac-12 in that category. Tilar Clark, who scored a career-high 11 points in Monday’s game, will also be expected to play a role against the Gaels.

Roberts is ready to see how her team stacks up against an opponent that has already beaten a Pac-12 school and has fallen to another as Utah prepares for conference action that gets underway this month.

“I think that this will definitely prepare us. They’ve only lost once. They lost at Cal by a handful of points,” Roberts said. “But they’ve beaten Washington state, they’ve beaten Indiana … So they’re not gonna come in here intimidated on any level … They’ve got good size, but we’re playing at home and at elevation, which is gonna be a variable. So I’m excited for the game. I think they’re a really good program, good team and I’m looking forward to seeing how our team responds.”