The Headlines are in: Newsies is a Must 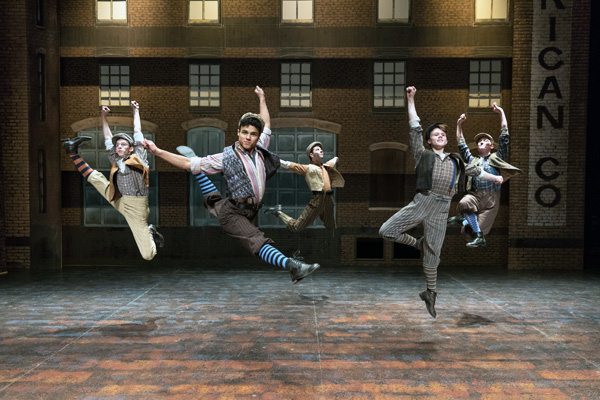 Seize the day and go see “Newsies” at Pioneer Theatre. This classic Disney musical is a must-see for all ages. It’s about standing up for yourself and claiming your rights, themes that are relevant now more than ever. Plus they do cool things like aerials, kicking their faces repeatedly, singing and tossing newspapers.

Can I just say how great the cast is? If you have ever been in a room with 20 men and one woman you will know that it can be a challenging situation. However, these boys blend seamlessly. The dancing was perfectly timed, the harmonies were flawless and each character was distinct while the ensemble was united. Jonathan Shew, who plays Jack Kelly, was fantastic. His “Santa Fe” was everything the iconic song could hope for. He mixes just the right amount of rugged and teddy bear for Jack. A stand out among the ensemble was Tomas Joaquin Matos. Look for him in any of the big dance numbers, often front and center, and you will be entirely enraptured by his enjoyment. Honestly, the entire cast was fabulous with a special shout out to Cicily Daniels as Medda Larkin. Wait for her big number and you will know what I mean. I only wish she danced less so I could just enjoy her voice.

The sound design of this show was perfect. The orchestra brought the music to life with too many instruments to count. I heard violins, sound blocks, whooshing noises and more. The music had a life of its own that blends with the story. The only downfall was, occasionally, someone’s mic didn’t get turned on quite fast enough. Luckily, these actors know how to project their voices.

The costume design was another lovely component. The Newsies have well-defined uniforms and the class distinctions between characters were very apparent. Katherine’s dress was lush and elegant and Medda’s seemed to try for expensive but fell a little short, perfect for a rising actress who owns her own theater.

With moving platforms and layered panels, the set was no small matter. The widows had individual lights and there were hand-painted signs. They even built a mini stage with theater lights. One misfortune was the sightline to the headline board. The headline on the newspaper is a central theme of the show and despite sitting near the center of the orchestra it was hard to read the headline display. However, they did have some creative tricks to move platforms with people on top and create rooms and images from steel beams and clotheslines. The transitions between scenes and the moving of the set pieces fit so well into the story, you almost don’t notice them happening. 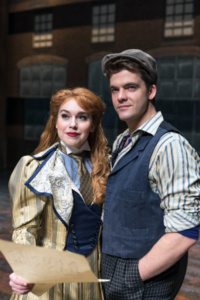 Finally the choreography, done by Karen Azenberg herself. These boys have to be fit and talented to pull off the tricky moves throughout the performance. To do it in perfect unison when there are fourteen of them dancing at once is no small feat. The tricks they are pulling take years of training and the cast makes them look effortless whether it’s throwing a newspaper six feet in the air on cue or doing a full 540 into a triple turn. They do it with a smile too, when appropriate for the storyline.

Overall “Newsies” is a must see this holiday. From young and old, it has something for everyone. The themes of oppression, triumph, human rights and rooting for the underdog couldn’t be more relevant. This show is a success for a reason and Pioneer has hit it out of the park. They close Dec. 20 so hurry and get your tickets. Shows are at 7 p.m. on weekdays and 7:30 p.m. on Friday and Saturday with 2 p.m. matinees on Saturday as well. Tickets vary in price but there is a discount with a valid student ID. Take your friends, your parents or a date. They’ll love it. The world will know… what a great show.