Richards: Looking Back at Fall 2017 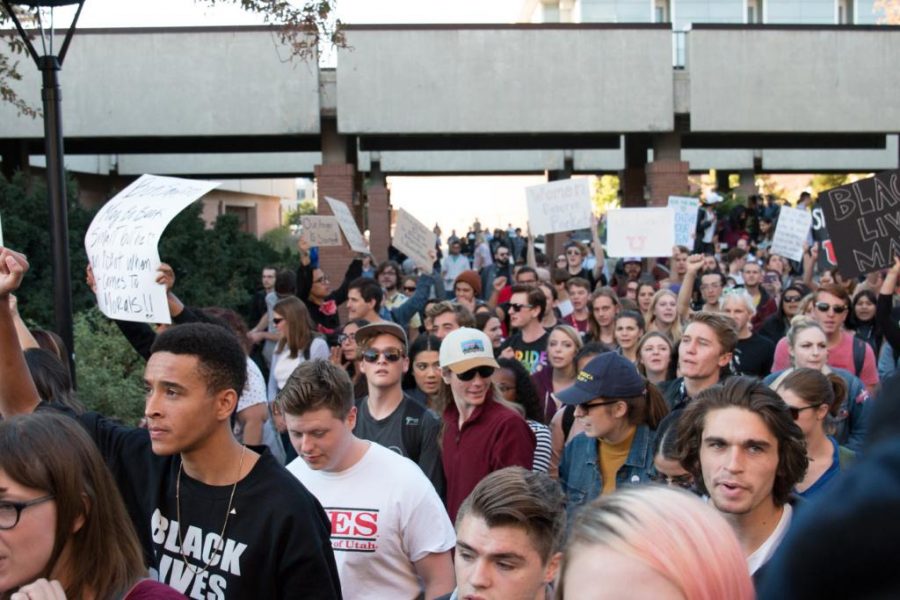 Protesters gather outside of a Ben Shapiro speech at the University of Utah on September 27, 2017. Chronicle archives.

A lot happened this semester.

Fall 2017 was exciting from the beginning. On Aug. 21, the first day of the semester, hundreds of students met outside the J. Willard Marriott Library and stared up at the solar eclipse. If there is one first day of school that University of Utah students remember, I’ll bet it is this one.

Other parts of the semester will be remembered too, although for more disheartening reasons.

In early August, as white nationalists marched in Charlottesville, NC, racist posters decrying black violence were found crudely taped around campus. While we like to think of ourselves as distanced from racism, whether by time or proximity, these posters reminded us how prominent it remains.

Two months later, the Carolyn and Kem Gardner building, which is under construction, was vandalized with anti-black graffiti. In November, a less explicitly racist yet nonetheless problematic message appeared on posters throughout campus: “It’s okay to be white.”

If instances like these didn’t raise questions as to how students of color are treated at the U, the school hosting conservative radio host Ben Shapiro certainly did.

At a protest outside Shapiro’s speech, Shapiro supporters shouted over chants of “black lives matter” with their own enthusiastic declaration that “all lives matter.” At one point, an Asian student was called an “egg roll” and laughed at when she said this was hate speech.

Luckily, the U has recognized this hostility towards students of color and established an anti-racism task force to create a more inclusive campus environment. Hopefully, this task force proves to have some teeth rather than being a symbolic gesture meant to placate those who are concerned or upset.

Some campus stories turned into national news, like the arrest of University Hospital nurse Alex Wubbels by an overly aggressive Salt Lake police detective. When video of the arrest was made public, it sparked outrage that led to the detective’s termination and a $500,000 settlement for Wubbels. Additionally, it sparked questions about the conduct of Salt Lake police officers and why hospital security stood by idly as the terrified nurse was arrested.

A more mournful event took place on campus. The day before Halloween, we lost ChenWei Guo, a 23-year-old international student who was killed in a random carjacking at the mouth of Red Butte Canyon.

Students used Guo’s senseless death as a call for solidarity and held a candlelit vigil on his behalf.

Upon reflection, the fall semester was, for better or worse, a memorable one.

For worse, it was ugly at times and revealed just how close to campus prejudice, violence and malevolence can get.

For better, our guard is up now. There is pressure on the university to address race on campus. In light of the violence in Charlottesville, white supremacists are becoming less vocal and are being met with increased hostility from the public. Administrators and lawmakers are quick to denounce and dismiss extreme right racial politics.

We head into Spring 2018 with scabs and scars, yet more diligent and better equipped for the ideological war against racism and bigotry.