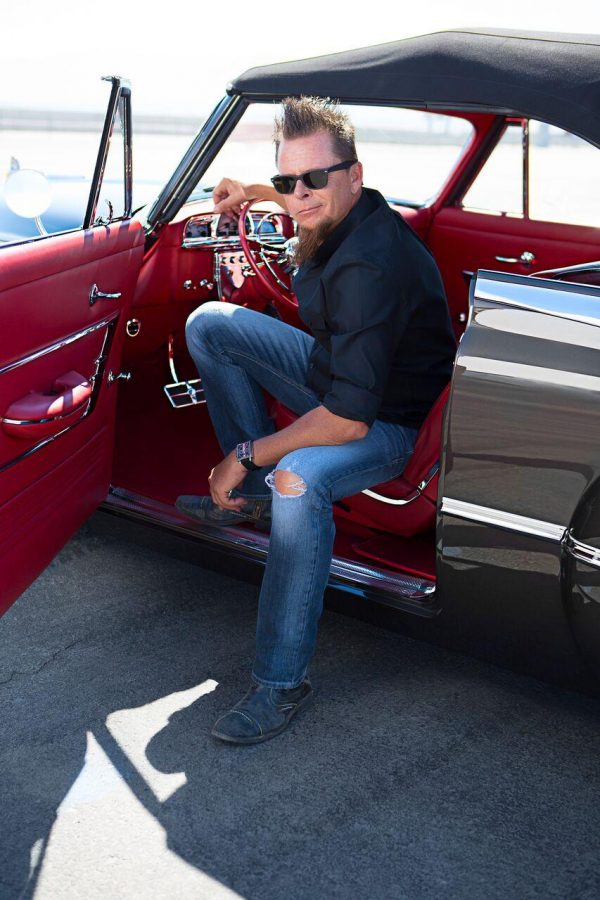 “BITCHIN’ RIDES” is a program on the Velocity Channel which features the local Salt Lake City custom auto shop “Kindig-It Design” owned by Dave Kindig. “Kindig-It Design” is a one-stop custom shop that creates beautiful masterpieces by rebuilding, remodeling and restoring vehicles from the ground up. In a recent interview, Kindig answered a few questions about his love for cars, when it all began and how he went from collecting Hot Wheels as a kid to being a top car designer with a hit program.

With a personal interest in classic cars and my own Hot Wheels collection, I first asked Kindig about what were his influences were as a child. Kindig credited Legos, Hot Wheels and drawing all as being a few of the roots in which his love for cars first began.

“I built many big cars with my Legos and used parts such as wheels and axles from other toys to make my creations. [I] also had a love for spaceships and created many of these to transport my Hot Wheels to other planets. I had hundreds of Hot Wheels and would trade them with my cousins and friends. Much like today, I really didn’t have a favorite just wanted as many as I could get. I always wanted to create different styles of plastic model cars and it was then I realized drawing them first gave me the ability to see what something could look like before cutting up the model car.”

Already it is clear that the key to building custom cars and creating unique designs for Kindig comes from imagination and artistic skill. I then asked out of my own curiosity what some of the activities were in his youth that foreshadowed his career with cars.

“Going to Salt Lake Autorama with my cousin Brad when it was at the Salt Palace downtown Salt Lake City…I also spent many hours at the Rose Park Library as a kid looking at every issue of Hot Rod Magazine, Motor Trend and Car and Driver Magazines to see what was the latest in production cars as well as concept vehicles.”

Love or obsession? Possibly both for Kindig when it comes to his feelings towards cars. Regardless of his natural inclinations, his passion and creativity have led him to a life of success. Kindig and “Kindig-It Design” have won multiple awards such as the 2012 Master Builder Award at the Boise Roadster Show, Utah’s Finest award at the Utah AutoRama in 2014 and the 2015 Al Slonaker Award at the Grand National Roadster Show among many more.

“BITCHIN’ RIDES” first began airing on the Velocity Channel in 2014.

“We had sent out a press release that we were getting the opportunity to restore a 1939 GM Futurliner for a local client. It happened to land in front of Bob Scanlon and David Lee of Velocity Channel who had worked at another automotive programming station and they were familiar with our custom works in the past and had seen other builds. They contacted us to see if we would be interested in doing a show…” I then asked how he feels knowing that thousands of people would be watching the show, essentially watching what he and his crew were capable of, Dave said, ”I’ve always been comfortable in front of people and in front of a camera and really enjoy fans who appreciate us and love to watch what we get to do every day.”

Kindig credits several people as being invaluable to his work.

“First and foremost my wife Charity who always allowed me to dream, without her I’m not sure where I’d be. Many people have influenced me in so many ways as a kid and as I grew up. My mom was always doing some kind of painting or arts and crafts, my grandfather Marvin Tippetts was a sheet metal worker and would always have some project going on in his garage, but not ever a car, just cool inventions. George Barris, Boyd Coddington, Chip Foose, Bobby Alloway, Troy Trepanier and many other builders are people I looked up to and appreciated their takes on customizing. Getting a foot in the automotive aftermarket back in 1991 at HPC (High Performance Coatings) working for the owner Jeff Holm in Salt Lake City. I worked for them for 8-1/2 years until June of 1999 when I started my shop and started surrounding myself with many more guys and gals who continue to inspire me every day.”

It is plain to see that Kindig is a skilled professional that has succeeded in creating for himself a job that he loves to do while providing clients the ability to make at least one of their dreams come true. “Kindig-It Design” adds flare and renown to the Salt Lake City community and just goes to show that Utah is home to some uniquely passionate and talented people that will always have something to offer to their community and to the world.

“BITCHIN’ RIDES” is on the Velocity Channel

Check your Cable provider for Channel and Time Info

For more Info go to: http://www.kindigit.com/calendar/