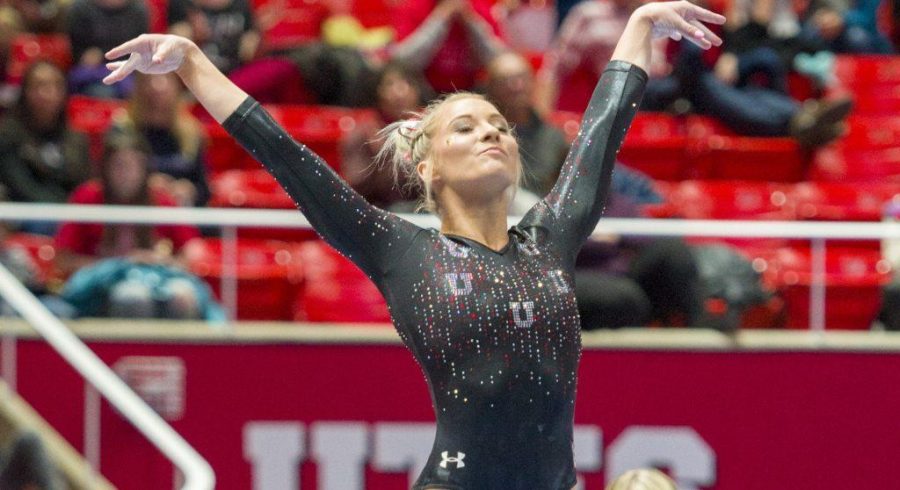 Maddy Stover, senior and co-captain  of the University of Utah gymnastics team, knows life can change in an instant. Her gymnastics career hasn’t gone as expected, but goal setting has taught her to be flexible when setbacks arise.

Stover, who had shoulder surgery, said that wasn’t the hardest obstacle she has faced. Being 19 years old and being diagnosed with rheumatoid arthritis has been.

Rheumatoid arthritis is when the body’s own immune system starts attacking its own tissues, specifically the joints. As a gymnast this isn’t an ideal situation to be in and at age 19, it’s almost unheard of. Stover jokes about spending her doctors appointments with 80-year-olds.

“What I’ve come to learn is that when one challenge hits you, another one is around the corner,” Stover said. “A lot of people don’t see [the challenges arthritis gives me] because they see the scars on my shoulder, but with rheumatoid arthritis there’s not really a band aid you can put on to see.”

To help with the pain, Stover comes in early to practice and stays late to make sure she is taking extra care of her body. One thing she has learned from her experience is that everyone has a story and those stories should be shared.

“There is always something more to somebody,” Stover said. “And taking time to really build relationships and foundations with people is important because you can see me from the outside and I usually have a huge smile on my face and [I am]bouncing around the walls, but sometimes inside, my body’s hurting pretty bad.”

Once her shoulder surgery was complete, Stover wanted to continue to be the best gymnast she could be both individually and for her team.

“It was a goal for me to not only be an active physical participant on my team, but a vocal and visual participant in regard to my leadership skills that I’ve been able to hone in on over these past couple years,” Stover said.

Stover’s ability to lead her team not just by example, but by words, is a benefit for the Red Rocks. The team won the Pac-12 Championship in 2017 and made it to the Super Six where it finished in fifth place. They are using that fifth place finish as motivation to do better this season.

Stover understands the importance of her role to not only help her teammates, but to be an example to the little girls who look up to them. Stover wants to use her example of setting goals and accomplishing them to inspire others.

“I think women empower[ing] women is one of the most important things, especially in our society today,” Stover said. “I think there are places that women are dominating and they need to continue dominating, and that can be in athletics, too. Our sport is really cool because it’s a mix of power and grace, and I think that’s what women are. I really think us 12 gymnasts are really good role models for the younger girls that I know come and watch us in the Huntsman and I don’t take that lightly. Every time I go on the Huntsman floor, I remember I was once that little girl in that leotard that looked up to the big [group] of girls that I am now [a part of].”