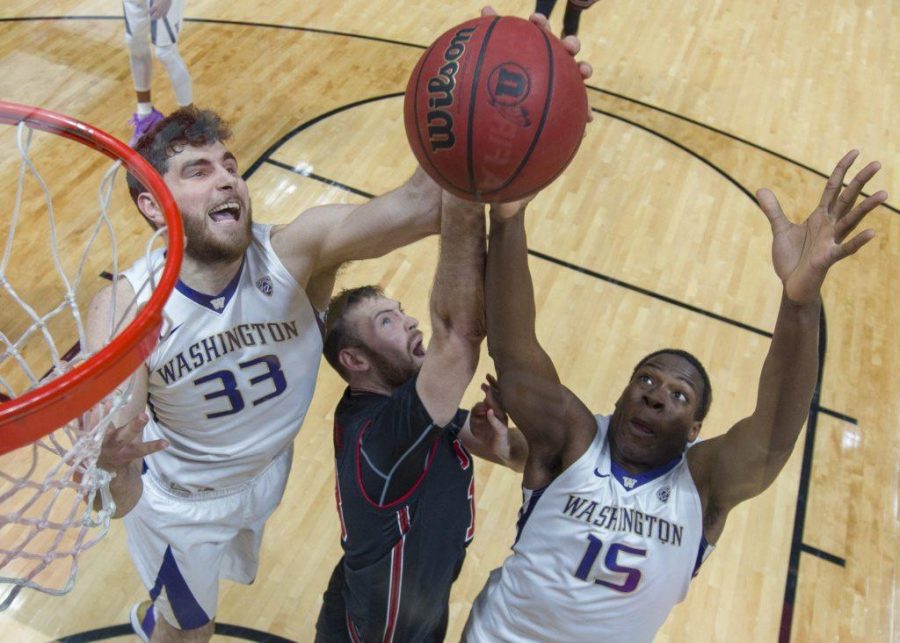 University of Utah senior forward David Collette (13) battles for a shot over Sam Timmins (33) and Noah Dickerson (15) of the Washington Huskies during an NCAA Basketball game at the Jon M. Huntsman Center in Salt Lake City, Utah on Thursday, Jan. 18, 2018. (Photo by Kiffer Creveling | The Daily Utah Chronicle)

20-10 – Justin Bibbins recorded his first career double-double as a Ute. It didn’t come on the back of a great passing night, although he had five assists. The 5-foot-8-inch point guard led the team in rebounds with 10 and in points with 20. He also made a critical steal with less than a minute left in the game as Washington threatened to make a comeback.

14 – The Washington Huskies committed 14 personal fouls in the first half, sending the Utes to the free throw line 14 times, leading them to make 9 of 14 points. On the other end of the floor, the Utes committed 6 first-half fouls, which resulted in Washington scoring 3 first-half free throws.

25 percent- After shooting above 40 percent in three of their past five games, the Utes shot a mediocre 25 percent from the 3-point line, making only 7 of 27 shots. The Utes limited Washington to 2 of 18 shooting from behind the arc, their second worst 3-point shooting game of the season.

21 – It’s a good thing Utah out shot Washington from the free throw and 3-point line since Washington outdid the Utes overall. Utah actually made four fewer field goals than Washington (21-25).

4 – The victory ends Utah’s four-game losing streak and brings the team to a 3-4 Pac-12 record.