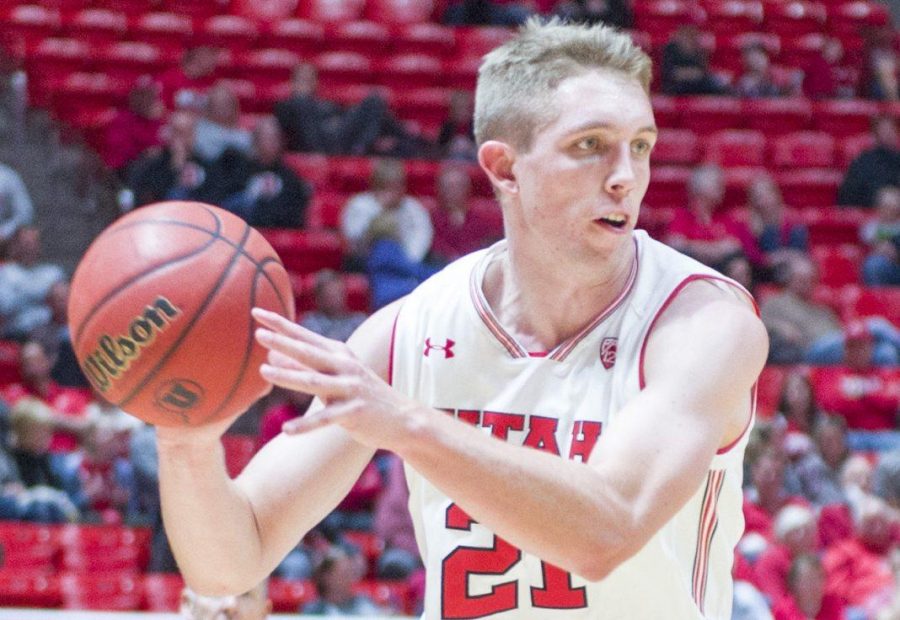 For the second time this season, the University of Utah men’s basketball team (12-7 overall, 4-4 Pac-12) was able to pull off a sweep. On Sunday night, the Runnin’ Utes took down Washington State (9-10 overall,1-6 Pac-12), 82-69 to cap off its week against the Washington schools in the Huntsman Center.

When the Utes left California with two losses, they talked about coming back to their stomping grounds and taking care of business at home.

“To be a .500 team in this conference, not that that’s our goal, but you got to take care of your home court. You got to go get some wins on the road,” said head coach Larry Krystkowiak. “And we did it in kind of a round about way, but we’re back even.”

Tyler Rawson had a team-high 22 points after shooting 8-of-10 from the floor, and six of those makes were 3-pointers. Justin Bibbins registered his second double-double of the season with 13 points and 12 assists.

“The hoop was a little bit more open than it was last week, that’s for sure,” Rawson said. “Bibbins and the other guys did a great job of finding me. … The key for me was just staying confident after a rough shooting week last week. I’m happy I was able to bounce back this week.”

The game opened with both teams scoring on their first possessions. Donnie Tillman drained a bucket, and he was fouled on the play, but on the other end of the court, Robert Franks tied the game with a shot from downtown. Both sides remained competitive, but the Utes were able to widen the gap and Washington State couldn’t match each of Utah’s baskets.

About 10 minutes into the contest, Carter Skaggs was called for a technical foul that sent Sedrick Barefield to the line. After draining both free throws and with the ball back in Utah’s hands, Barefield laid it up for an additional two points.

Fouls were a concern in the first half for Utah. Tillman spent a fair portion of time on the bench after racking up three fouls by the 4:48 mark. David Collette and Rawson also tallied two first half fouls, but the bench players stepped up. Utah’s bench was responsible for 38 total points, 29 of which came from Barefield and Gabe Bealer.

Krystkowiak was pleased with the contributions made from the starters to the subs. He also was glad to see Barefield take on a new role by coming off the bench.

“I woke up in the middle of the night a couple nights ago and I just thought ‘Man, [Barefield would] be a heck of a punch coming off the bench,’” Krystkowiak said. “And then all the sudden when you have to go to the bench, here comes Sedrick, and you can kind of go with a different family of plays and give him something to be excited about and some enthusiasm.”

A 3-point shooting percentage of 42.1 as a team pushed Utah through the second half. Rawson, who shot 3-of-4 in the final 20 minutes, helped Utah distance themselves from the Cougars. Rawson scored the first 3-pointer at the start of the second half and later on he drilled back-to-back ones from deep. Bibbins and Bealer also had two 3-pointers and Barefield knocked one down as well.

After Bealer’s final 3-pointer, Barefield stole the ball and took it to the hoop for a layup. Utah’s offense continued to roll along when Bibbins and Rawson connected for a monstrous alley-oop to give Utah some of its final points of the night.

Up next, the Runnin’ Utes will hit the road to face Arizona State and Arizona. The game against the Sun Devils gets underway on Thursday, Jan. 25 at 7:30.