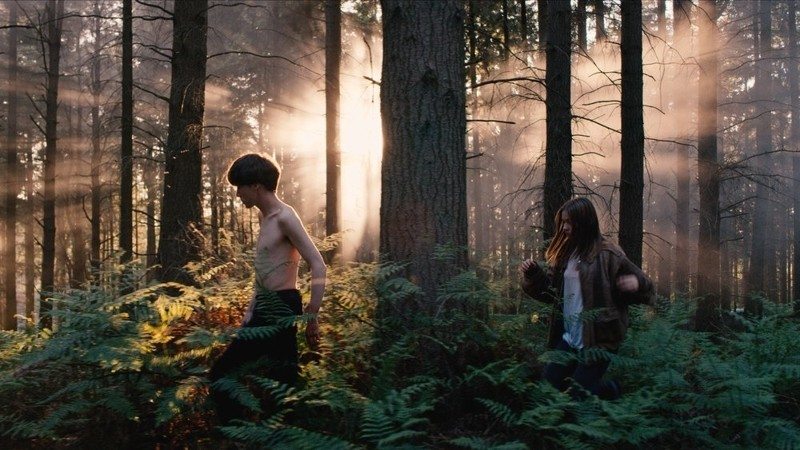 (Warning: this review contains mild spoilers for “The End of the F***king World”)

For an odd show with a title best left out of polite conversation, “The End of the F***ing World” has become surprisingly successful, garnering both internet buzz and critical acclaim. The series pulls no punches with its off-putting premise. 17-year-old James (Alex Lawther) is a self-described psychopath so closed off from emotions that he once put his hand in a deep fryer just to feel something. After years of killing animals, (shown in one of the show’s many “can I laugh at this?” moments) he feels prepared to kill a human victim. He finds the ideal target in his classmate Alyssa, played by the fantastic Jessica Barden. Alyssa is volatile, rude and rebellious, and she sees James as a chance at romance and escape. By the end of the first episode, the pair has impulsively ran away from home, setting off a dangerous chain of events that reveals both characters’ surprising connection to each other and the wounds of a tumultuous past.

The show is part crime drama, part road movie, and part black comedy; a cocktail that sounds strange but tastes surprisingly delicious. It’s a show designed to make you laugh, squirm and gasp; often in the same scene. Perhaps best of all, each episode is blessedly free of filler: at under three hours long, the series is best devoured in a single sitting. Consider it both a gift to the busy college student and a middle finger to any drama that requires months of commitment for little payoff.

“The End of the F***ing World” is nothing if not bold. The dialogue is dry and acidic, the characters invigoratingly unlikable. Credit must be given to the show’s sole writer, Charlie Covell. She juggles an engaging narrative, fascinating characters and sharp, juicy dialogue with ease; all in a tight 20 minutes. The show’s aesthetic choices are regularly inspired. The jumpy, frenetic editing is disorienting in the best way and the soundtrack, mostly featuring classic rock and soul, is altogether brilliant. The cinematography from Justin Brown and Ben Fordesman can be surprisingly gorgeous, celebrating England’s beauty and its grime. Even the actors themselves become valuable visual set pieces: the naiveté and vulnerability of their youthful faces disarm viewers as the show lands gut punch after gut punch.

The show is explicit in about every way imaginable, and it is certainly not above shock value for perverse laughs. In less capable hands, this could all turn cheap or exploitative, but here it feels refreshing, even revolutionary. By the end of the series, the show’s crassness has a clear raison d’être: it plays dirty, but only because the world plays dirtier. But for all of the series’ sharp edges it has a clear affection for its characters, making the experience both more palatable and more emotionally complex. TV Critic Emily Nussbaum described the series on Twitter as “extremely dark but not actually nihilistic,” and the series slowly reveals a twisted but genuine moral calculus. One of the most pleasant surprises of “The End of the F***ing World” is how seriously it takes trauma, in a way that never feels like a plot device or a lazy attempt to make characters seem deep. Even when James and Alyssa do something reprehensible, they remain understandable, if not entirely sympathetic. This contrast is largely thanks to Lawther and Barden, who make their characters feel like real teenagers, which is to say they are reckless and caring, stupid and vulnerable, horny and mean. Their performances are consistently excellent, grounding even the most extreme moments with necessary restraint.

Without giving too much away, I will say that I found the show’s ending to be a letdown. After seven episodes of careful plotting, the eighth stretched the limits of plausibility and indulged in the cheap revelations and dramatic twists that the rest of the series intentionally eschewed. Even worse, the final shot aimed to be thought-provokingly ambiguous, but the result was instead frustratingly incomplete. I suppose the silver lining is the opportunity for a second season. Already, I am anxious for another perfectly proportioned serving of aggression and angst.

Best Episode: The pilot is remarkably assured as it immediately establishes the premise and tone, but the best is Episode 3, which is the show’s most daring balance of sickening and charming.

Trigger Warnings: If it isn’t clear already, this is not a binge for the faint of heart. The episodes contain animal abuse, graphic violence, gore, sexual assault, suicide, strong language and explicit sexual content.