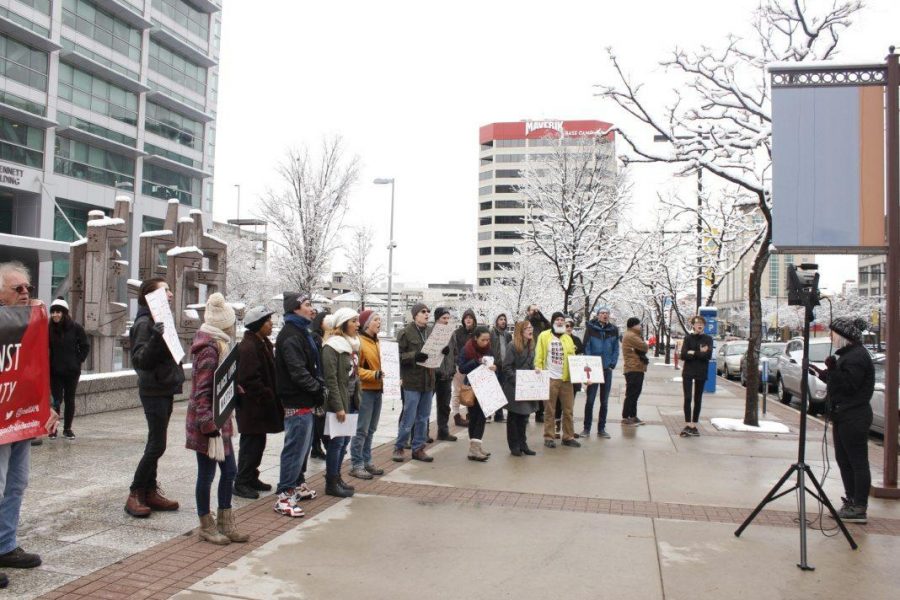 The University of Utah's chapter of Students for a Democratic Society rallied on Saturday, Jan. 20, to recognize one year of resistance against President Donald Trump's administration.

The University of Utah’s chapter of Students for a Democratic Society (SDS) held a rally on Saturday Jan. 20 — one year after President Donald Trump’s inauguration — outside the Wallace Bennett Federal building in downtown Salt Lake City to commemorate a year of resistance against the administration’s policies and rhetoric.

“It is a celebration and a commitment to the movement and to our goals,” said Anthony Scoma, a student at the U and a member of SDS.

When asked about the group’s accomplishments, Scoma said the organization has connected likeminded groups, building friendship and camaraderie amongst leftist activists in Salt Lake City.

Scoma noted despite many discussions with the administration, SDS continues to face resistance in its attempts to petition the university to declare itself a sanctuary campus for undocumented students.

“We are asking [university administration] to go the extra mile to show that they put students first,” Scoma said. “They said they wouldn’t actively help ICE, but that they would follow whatever rules they were supposed to.”

Speakers at the rally admonished the president’s decision to repeal Deferred Action for Childhood Arrivals (DACA), while one speaker who claimed to be a DACA recipient advocated for a more broad “fight” that would include all undocumented immigrants.

“I don’t really want to fight for one group of undocumented immigrants — I think we should be fighting for all of us,” she said on condition of anonymity, for fear of being deported.

Speakers advocated for the boycott of and divestment from institutions funding Israeli military operations. Chants such as, “From the river to the sea, Palestine will be free!” further expressed the group’s opposition to the president’s agenda. Trump recently announced that the United States would move its embassy in Israel from Tel Aviv to Jerusalem, essentially recognizing it as the capital of the country despite Palestine’s claims to the city.

“I think American intervention is wrong,” said Shirley Reyes, a student at the U and SDS member, of the move. “[Jerusalem] was Palestinian land before Israelis came over.”

A large banner reading “No to the Border Wall” and “No to Israeli Apartheid” was held up facing State Street.

The rally remained peaceful and free of conflict, save for one individual who chanted, “Jesus is all that matters,” as he passed.