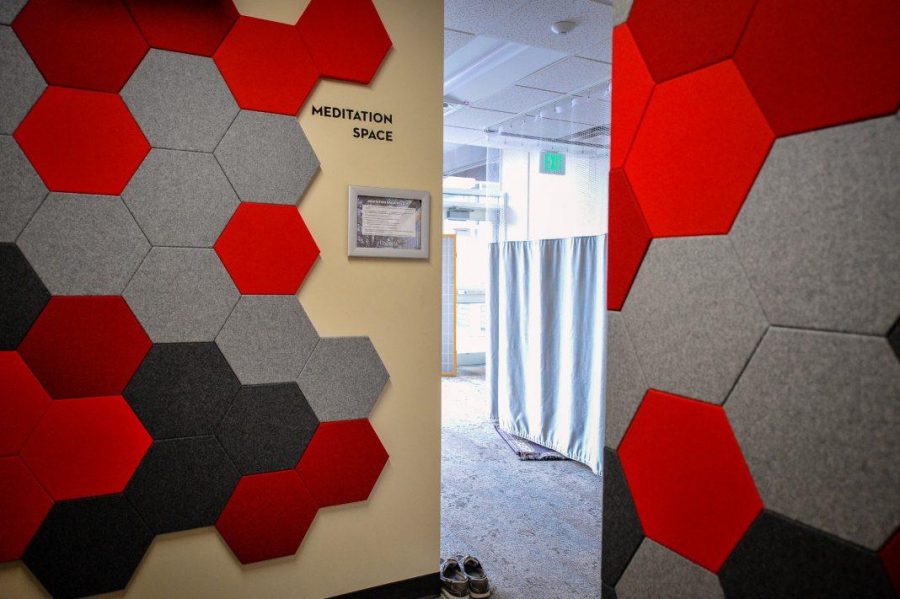 The new Meditation Space in the Student Union at The University of Utah in Salt Lake City, UT on Thursday, Jan. 25, 2018 (Photo by Adam Fondren | Daily Utah Chronicle)

After five years of efforts, the A. Ray Olpin Student Union Buildling at the University of Utah cut the ribbon Thursday for its Meditation Space.

Located on the third floor of the Union, the area is a place for not just meditation, but also prayer.

“While the space is for everybody, a calm reflective space for anyone to use, I’m especially proud of the fact that we have some spaces to accommodate our Muslim students who I know can sometimes sort of feel on the outskirts of things,” said Whit Hollis, the Union director. “I think it speaks to the commitment of the university — it definitely speaks to the commitment of the university Union”

“I am super excited that the space is open all the time,” said Amr Mohamed, former president of the U’s Muslim Student Association. “It’s not a room where you have to ask permission to open it. It is open for everyone to use it. I believe there are very few campuses nationwide that have that option of a wudu space.

The room features acoustic panels to create a quiet atmosphere. The space is draped in natural light and has a view of the mountains.

“I think it’s particularly important, as a student myself, having a designated quiet space to practice mindfulness and meditation and even prayer or any other religious practices,” said Joren Plunkett, a graduate assistant to the Union. “I think it is very important to create that safe space.”

Students like Plunkett can now stop in at the room after classes to take care of their mental health.

Samantha Motta, a second year social work student, stumbled upon the opening of the new space as it is near the area she sits to do homework. Now with a new meditation space, Motta is excited that she will have more options to occupy her time while she waits to go to work.

“This is really one of the proudest moments in this almost 17 years that I have been here,” said Hollis. “The Union, as the community center for the campus, we work very, very hard to make sure that everybody can see themselves at the Union and find safe and comfortable spaces to be in the Union and meet all types of people and make friends.

With help from a number of sources, including the Associated Students at the University of Utah and the expertise of MHTN Architects, this addition to the Union became a reality.

“I am mostly just excited that the students now have a place that they feel like they own that is custom-suited to them,” said Randy Knight, the lead architect on the project. “The greatest satisfaction is knowing that students are satisfied.”