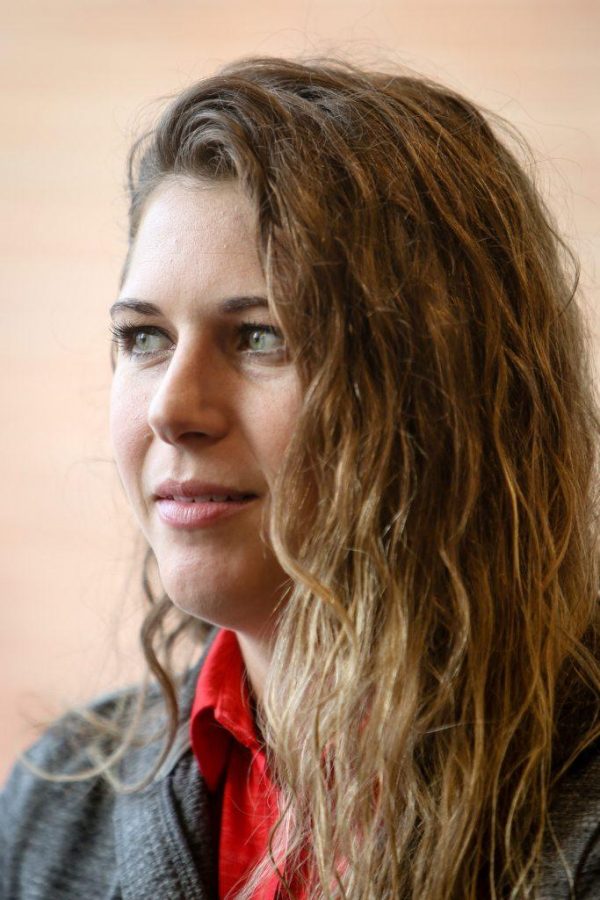 Lauren Jones at the Fueling Station in the Sorensen High Performance Center at the University of Utah in Salt Lake City, UT on Thursday, Jan. 11, 2018 (Photo by Adam Fondren | Daily Utah Chronicle)

Tiffani Lewis of the University of Utah gymnastics team loves to eat chips and salsa so much so that she categorizes them as her favorite “cheat meal.” As a collegiate gymnast, however, Lewis has to eat cheat foods in moderation because nutrition plays a huge part in the Red Rocks’ ability to perform at an elite level.

“[Nutrition is] very important especially because we compete every weekend,” Lewis said. “Meets are very long, very energetic, very upbeat and it takes a lot of energy to stay at that high level, especially when you’re doing routine after routine. Throughout the year you have to stay healthy, and you aren’t just doing it for yourself — you’re doing it for your teammates.”

This is where Lauren Jones, director of nutrition over all sports in the Utah Athletics Department, comes in.

During the winter, she works with several programs from the tallest team (men’s basketball) to the shortest team (gymnastics). Keeping each individual student-athlete healthy is her goal.

“Total calories are very different, even different roles on the team have different calorie needs,” Jones said. “With men’s basketball, for example, I’m trying to get them to gain weight and maintain weight throughout season — that’s one of their struggles — whereas gymnastics in-season is actually a little bit less energy expenditure than when they were in pre-season because they had more conditioning and longer and more intense practices.”

During the day, there are fueling stations available for student-athletes where they can get a variety of food and snacks. The campus has two stations, which are open from Monday throughFriday, 7 a.m. to 6 p.m. A lot of athletes use these stations pre- or post-workout or to grab lunch. One of the gymnastics team’s favorite foods is avocado, so for lunch they might grab a bagel with some guacamole and deli meat on it from a fueling station.

Jones said the gymnastics team generally eats less and has a higher health IQ, which leads to them making better food choices. Recently, the Red Rocks held a cooking class to help them learn to make a meal so they are able to cook for themselves when the fueling stations or cafeteria are not options. And because athletes can not always get to those fuel stations, Jones holds individual meetings with athletes to go over nutritional goals.

In those individual meetings , the topics covered vary with each athlete. It could involve debunking a myth that an athlete heard or talking about a new fad diet the athlete heard about and wants to try. Sometimes it is looking over what the athlete has been eating if they feel tired or they feel like they aren’t performing at 100 percent.

“The first thing from our prospective is we don’t want to shut them down,” Jones said. “We want to be open and hear their reason for doing it.”

The Red Rocks are taught about the “athlete’s plate.” This consists of eating a third of carbohydrates, like brown rice or a sweet potato, a third of lean protein, turkey, meat or fish, and a third of vegetables. Fruit always goes on the side.

While Jones works with student-athletes, her advice to non-collegiate athletes wanting to improve their health is to focus on a healthy lifestyle, not something that lasts 30 days. Drinking lots of water and not skipping meals is also key.

“I think a lot of times people think that there is a quick fix and really, it’s just about having things in moderation,” Jones said. “Some people do really well with going cold turkey and sometimes that creates other bad habits. In a way, you’re putting this food up on a pedestal and then you finally get it and go crazy, so I think take baby steps toward your goals, just include lots of whole foods if you can. Eating more fruits and vegetables is always a great place to start and eating frequently throughout the day is a  good, healthy habit to have.”