To Binge or Not to Binge Episode 8: “Peaky Blinders” 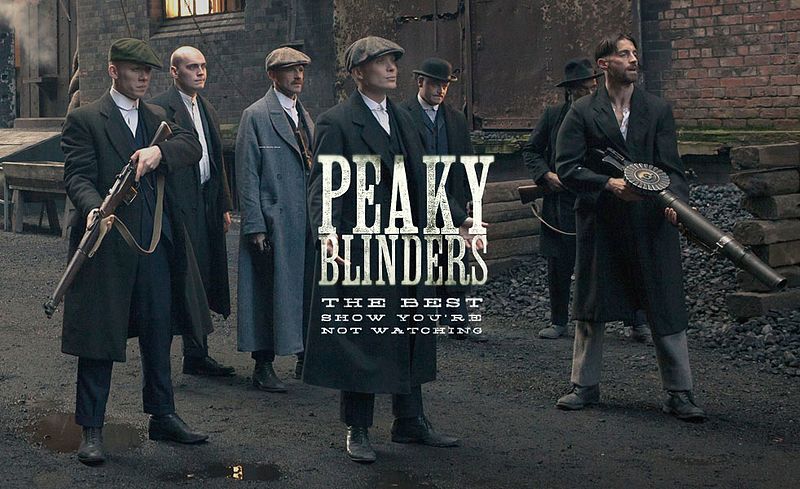 Since 2014 Netflix has given U.S. audiences the masterpiece “Peaky Blinders,” a historical fiction crime series set in the early 1920’s about a family gang called the Peaky Blinders who rise to power under the guidance of their leader Tommy Shelby (Cillian Murphy.) Set in Birmingham, England the Shelby family experiences the effects of living in a poor industrial area while being considered social outcasts due to their Irish and Romany heritage. Centered around the Shelby brothers Tommy, Arthur (Paul Anderson), John (Joe Cole), sister Ada (Sophie Rundle) and their Aunt Polly (Helen McCrory), “Peaky Blinders” spins multiple stories into one incredible plot that thickens with each minute. This series is a BBC production and a Netflix Original Series created by Steven Knight who is known for “Locke” (2013) and “Eastern Promises” (2007) (Knight-IMDB.) “Peaky Blinders” is for mature audiences due to its content which includes explicit language, sex, nudity, intense violence, blood and gore.

What makes “Peaky Blinders” a Masterpiece?

I could create an endless list of all the things I think make “Peaky Blinders” a masterpiece, but here are a few main points I believe are the most important. First, the incredible performances of all the actors including guest-starring roles of professionals such as Sam Neill (Inspector Chester Campbell), Tom Hardy (Alfie Solomons) and Adrien Brody (Luca Changretta), as well as the incredibly engaging performance of Murphy as Tommy. Second, the use of a historical backdrop as a solid foundation in which the fictional Shelby family live. Finally, the incredible detail in the sets, costumes, historical events, social movements and relations between citizens of different backgrounds during this time period (though some are more accurate than others.) These three main elements of “Peaky Blinders” contribute to the authentic feel of the show, oftentimes tricking audiences into believing they are witnessing a reenactment of real lives. With the main theme being the crime life of gangsters paired with action that is mainly brutal fistfights and shootouts, “Peaky Blinders” is an unforgettable series that leaves audiences always wanting more. These are only a few possible reasons in my mind as to why “Peaky Blinders” has such high ratings, 8.8/10 on IMDB and a 96 percent critics’ score on Rotten Tomatoes, multiple awards and nominations and incredibly devoted fans including myself.

Here is a quick recap of seasons one through three with only a few spoilers so new audiences can still be surprised and enjoy the never-ending twists and turns of “Peaky Blinders”.

Tommy takes leadership of the “Peaky Blinders,” replacing his older brother Arthur and quickly becomes infatuated with Grace (Annabelle Wallis), a newly hired barmaid who is also a spy. Under the direction of Inspector Chester Campbell, Grace infiltrates the Shelby’s business through her job at The Garrison Pub and quickly finds herself in the middle of the Peaky Blinders while searching for guns Tommy has acquired. Through gang wars and manipulation Tommy gets a legal betting license while at the same time struggling to deal with Ada’s relationship with Freddie Thorne and the increasingly volatile Inspector Campbell. The season ends with a bang when Grace shoots Campbell and leaves England after resigning as a spy.

Two years have passed since we last saw the Shelby family. Freddie (Iddo Goldberg), Ada’s husband and father of her child, has died due to illness and it is evident from the Shelby’s well-dressed appearances that business has been good. Establishing Shelby Co. Limited, Tommy begins planning for business to expand to London. Still under the manipulation of Inspector Campbell, Tommy begins weaving his business and personal plans for success together ending with the Derby Race, a murder and a close call all while reconnecting with Grace.

Tommy and Grace are married, but the good times don’t last long. Tommy complicates the family through relations with outcast Russians as a means of fulfilling his secret duties to Winston Churchill. A significant death hits Tommy and his family which results in a downward spiral of drugs and parties with the Russians. After a successful mission that almost costs the Shelby’s everything the season ends with a cliffhanger. Arthur, John, Michael and Aunt Polly are arrested and sent to prison to hang for their crimes, the result of a deal made by Tommy.

The latest epoch of the Shelby family gives audiences a realistic evolution to “Peaky Blinders” as past actions come back to haunt them.

The Shelby family is saved by Tommy in the very last minutes of their lives, nooses literally around their necks. This result is shattering for the family and leaves them all in shambles, torn apart and now completely distrustful of Tommy. Tommy’s brothers are wary of him and Aunt Polly is pitted against him for risking the lives of the family. Tommy is introduced now slightly older, wearing glasses and living out his isolated life through constantly working to further establish the Shelby Company in both legal and illegal business ventures. The past comes back with a bloody vengeance when everyone receives a “black hand” days before Christmas. This gang symbol unique to the Italians is an omen of death, giving the Shelby family a heads up that a bloodbath is imminent. The family makes a truce with Tommy under his own persuasion and gathers in Birmingham, returning to where it all began for a fight to the death. This season features a guest appearance of the actor Adrian Brody playing Luca Changretta, an American-Italian gangster and leader of the death squad sent to avenge the death of his father at the hands of the Peaky Blinders in a previous season.

How is this season different from the others?

We see our beloved characters more complicated and distraught than ever. Aunt Polly has become a drug abuser and alcoholic in her attempts to deal with her near-death experience. Michael is torn between the condition of his mother and maintaining his duties with the Peaky Blinders. Arthur is now docile and lives out his days with his religious wife and family in the countryside. John flourishes with his family on his own estate in the country, still strong and hearty but influenced by his wife Esme to be the center of the Shelby family. Besides working non-stop Tommy drinks and indulges in prostitutes every once in a while, living with his son in his mansion. Though appearing calm and level-headed, it seems that Tommy may be dealing with guilt in his own manner. To sum it up, the characters are beginning to wear and tear just a little bit under the strain of the criminal life they have been living. Their wariness of Tommy and almost complete lack of trust in him has nearly destroyed the family.

Next to the action and complex storylines, I love the depiction of women in “Peaky Blinders.” This show could easily be considered a “man’s show” for its subject matter, but I would argue that “Peaky Blinders” is geared towards both a male and female audience because the women are depicted with a particular realism that is also given to the men. The women are given depth and detail with room to grow and establish a connection with other characters that is not just that of a one-dimensional love interest. Yes, there is prostitution, sex, nudity and rape involving women in this show, but the response towards these topics are not solely from the perspective of the men and encompasses the complexities of these experiences from the women’s points of view.

Women are exposed emotionally down to their core: their problems are up close and personal and taken seriously. It is a relief to see women fighting back, speaking up and using their intelligence in a show like this one because seeing a woman on the screen who is relatable and engaging enriches the experience. I know there are other women out there that love crime, action, suspense and horror shows that desire female characters who are more than just damsels and lovers. With all this said, it is obvious my favorite female character is Aunt Polly (Helen McCrory) who I think is an intelligent woman that is strong and can take command while also being gentle and loyal to her family. She is a character like no other who demands the screen with Tommy Shelby being both his intellectual counterpart and support in both business and gang activities: a woman of ability and talent in what just so happens to be crime.

In summary, should you binge-watch “Peaky Blinders”?

My binge experience was typical. I had been counting down to the release of the fourth season after a whole year of waiting and, while on winter break, I watched the new season in one day. I spent the rest of that week taking my time to re-watch the first three seasons since I couldn’t get enough. The refresh was needed but at the same time, my experience of re-watching the earlier seasons revealed to me how far the Shelby family had come to reach that point in season four. With the rate “Peaky Blinders” is going, I have little doubt season five will continue to impress and establish itself further as an A+ Must See Original Netflix Series among certain groups of bingers.