How The Chronicle Covered the Civil Rights Era 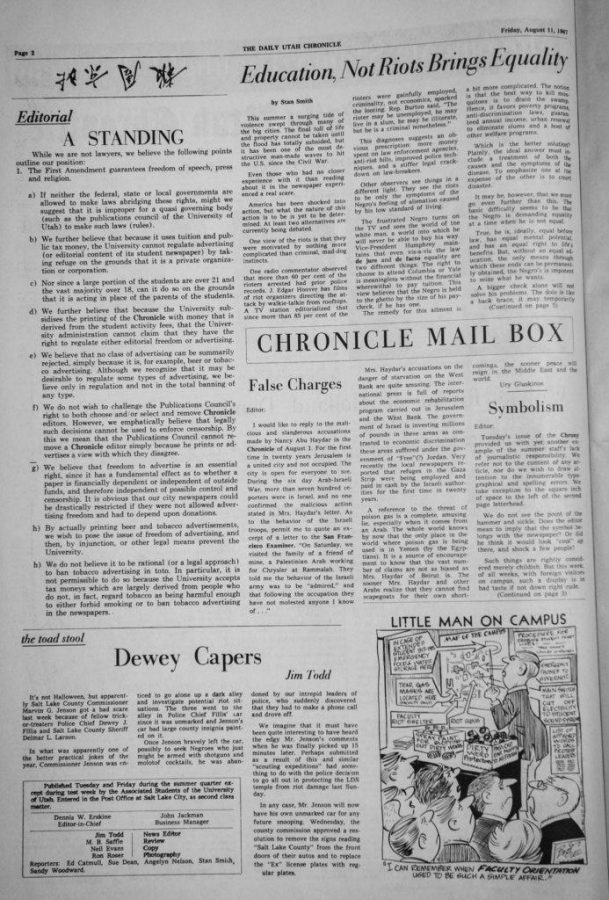 This article contains explicit language that may be offensive to some readers. The purpose of this article, however, is to examine Chronicle coverage during the civil rights movement, educate readers and reveal journalistic practices that would be unacceptable and unethical today. To accomplish this, The Utah Chronicle editorial staff deems it necessary to include the language as it originally appeared. The Chronicle staff does not condone the language or the context of this coverage as it was originally printed.

Brigham Young, the second president of The Church of Jesus Christ of Latter-day Saints, is credited as being the founder of the University of Utah. In the mid 19th century, Young organized a Board of Regents which soon after led to the school’s establishment. He was also an ardent believer in the inferiority of black people, preaching that dark skin is a curse from God. In 1852, two years after the U was created as the University of Deseret, the Mormon leader proclaimed, “Any man having one drop of the seed of Cain in him cannot receive the [Mormon] priesthood. With the discriminatory teachings of the U’s founder in mind, here is a look at how The Utah Chronicle covered civil rights issues throughout the 1950s and ‘60s. Some of it is ugly, some of it is inspiring and a lot is relatable today.

Black men were forbidden to hold the Mormon priesthood until 1978. Twenty years before that, on Jan. 15, 1958, a Chronicle editor responded to a letter asking for clarification of the church’s position on black people.

“LDS doctrine considers the Negro as well-adapted to life on earth as any other normal human being,” the editor wrote. “The only problem the Negro has is being a descendant of Cain, cursed by his sin.”

Eight years later and attitudes hadn’t changed, as indicated from a letter to the editor on April 8, 1966, titled “The Negro.”

“It is only through the directive of God that the Negro is not allowed the priesthood,” the letter read. “The Mormon people have nothing to do with this directive, in fact, they have been given supplementary instructions to treat all people with equality.”

The same year, however, a Chronicle staff writer took a more progressive position and pushed the church to address the ban.

“Perhaps sooner rather than later,” the author wrote, “the LDS hierarchy will consider this an issue of the times [black priesthood ban], and either resolve it or clarify it.”

In an article headlined “The South: History Of American Negro,” a Chronicle writer downplayed the barbarity of slavery on Oct. 11, 1965, writing that views of “the Negro as a victim of sadistic lords of the lash, forced to live and work under abmoninable [sic] conidtions [sic] in a kind of seraglio … and concentration camp” were “unrealistic and border on the extreme.”

In a featured editorial from the Associated Students at the University of Utah (ASUU), the 1962 student body officers opposed racial segregation on moral and legal grounds, referring to the 1954 Brown v. Board of Education decision that abandoned the separate but equal doctrine. The “ASUU Filibuster” condemned violence in Mississippi from people who were upset about the decision, but also sympathized with white separatists. “We realize that an equally important and more complicated question of State’s Rights is involved, and in this instance we cannot help but be someone sympathetic with the feelings of the citizens of the state of Mississippi.”

Such lukewarm attitudes towards racism have not aged well.

On Jan. 14, 1949, a fraternity member defended the segregation of Greek organizations in a letter to the editor and questioned whether the editor was hypocritical for being against segregation. “Do you go with Negro girls?” the fraternity member questioned. “Would you even dance with one? I agree with you that there is nothing wrong with them, but the world has not overcome racial prejudice.”

Deflecting any social responsibility, the author continued, “I agree that race prejudices should be eliminated, but the fraternities can’t do it alone. The nation and world must make this change, and I’m sure that when the time comes the frats will be well forward with the movement.” Similar concerns about interracial relationships were brought up by a Chronicle associate editor and staff writer in the Oct. 25, 1967 feature, “Negro Residents Enjoy Beehive State,” which included the sections “Dating White Girl” and “Intermarriage Increasing.”

The feature ends by discussing the possibility of race riots in Salt Lake City as the result of unrest and clash between racial groups.

Indeed, the idea of black communities being violent or inferior is prevalent in Chronicle coverage around this time. In “Education, Not Riots Brings Equality,” written on Aug. 11, 1967, a Chronicle writer argued “the Negro is demanding equality at a time when he is not equal … without an equal education, the only means through which these ends can be permanently obtained, the Negro’s is impotent to seize what he wants.”

On March 5, 1948, this belief of black inferiority was used to defend the Ku Klux Klan and lynchings by a Chronicle columnist.

“Lynching is practiced as retaliation of rape and other attacks on whites by irresponsible Negroes,” the columnist wrote. “It is practiced to prevent further infringement on the white man’s rights by means of instilling fear of the consequences.” And, “Jim-crow and other discriminatory measures are instituted to further protect the white from the Negro in ordinary every day [sic] contact.”

Perhaps the most egregious thing revealed from an analysis of Chronicle coverage from past decades was a recap of black comedian Dick Gregory’s appearance at the former U’s Field House in November 1967. Seemingly in an attempt to be tongue in cheek, or to play on Gregory’s comedy bit about “Negroes [being] tired of insults,” the article, which was written by a Chronicle managing editor, appeared with the headline “‘Nigger’ Ready to Revolt.”

While the article was almost certainly not intended to be racist or prejudiced, this seems like poor editorial judgment and would be completely unacceptable in today’s media climate.

Another example of bad taste is a column dated Nov. 24, 1965, in which the author uses demeaning language to lament black individuals.

“When emancipation came to the Negro race, it found them, by and large, illiterate and uncivilized,” the author wrote. “They were not capable of exercising their civil rights with any serious degree of responsibility.”

The author used his patronizing view of black people to justify his lack of support for civil rights legislation.

“I am willing to help, not the ‘Negro movement’ but the individual Negro, in exactly the degree that he indicates willingness to help himself.”

One only needs to turn to conservative talk radio to see how prevalent this narrative remains today.

“Those Walls Must Come Down”

Not all was upsetting about Chronicle coverage of civil rights issues, however. On Dec. 7, 1955, The Utah Chronicle wrote an editorial condemning the Georgia Institute of Technology and University of Georgia for refusing to compete “against [football] teams using Negroes in the South.”

“The action taken is scarcely defensible from any point of view,” the 1955 editorial read. “In fact, the general racial view in the South is indefensible and out of tune with basic American ideals.”

The editorial went a step further and called on the NCAA to “bar segregated schools from playing in NCAA competition.” At a time when states’ rights were frequently used as justifications for discrimination, this editorial highlights the bravery and forward-thinking of the Chronicle staff.

Another shimmer of hope came from a news article written on Oct. 4, 1967, about political science professor and Hinckley Institute of Politics director J.D. Williams and his plea for Utahns to break down the “walls of prejudice” and to put an end to housing and employment discrimination.

“It is in the minds of white Americans that the walls of prejudice have been erected, for centuries, to exclude Negroes from decent employment and housing of their choice,” Williams is quoted as saying. “Those walls must come down.”

Looking back at The Utah Chronicle’s coverage of civil rights issues reveals both similarities and differences to today’s social climate. Most importantly, it highlights the fact that in every generation, including our own, there are people who act as proponents of social change, people who are detractors and people who sit idly and passively on the fight’s sideline, seemingly content with either side winning. We should all think carefully about which of these stereotypes history will remember us as.