“The Hunchback of Notre Dame” Takes Center Stage at Hale 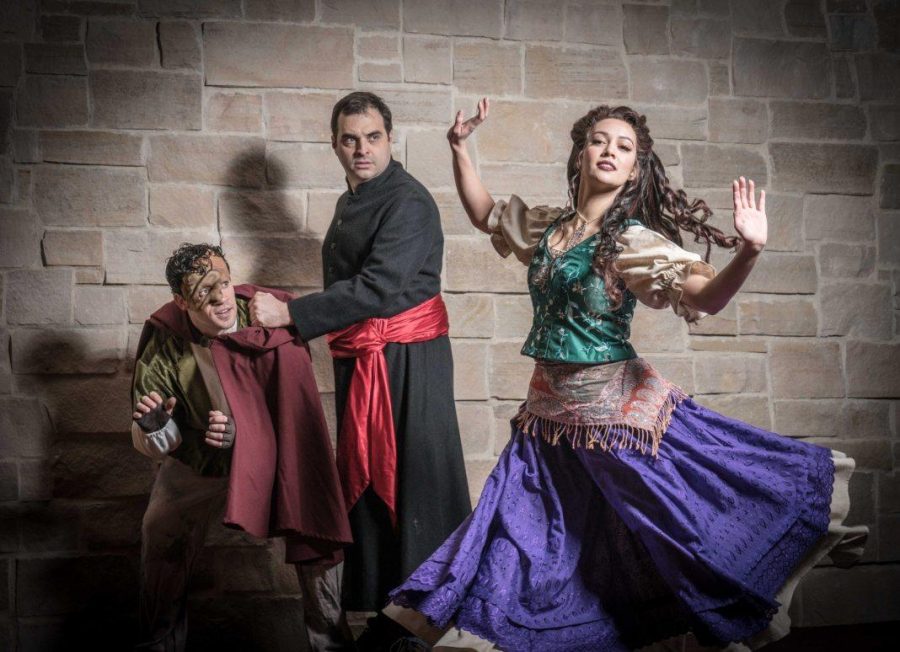 Presenting a fresh and powerful perspective with the production of “The Hunchback of Notre Dame,” Hale Center Theatre utilizes their incredible venue and an impressively strong ensemble to portray this classic tale.

Based on the French Romantic/Gothic novel written by Victor Hugo in 1831, the book was later adapted into a Disney movie with music by Alan Menken and lyrics by Stephen Schwartz and was eventually featured as a play.

A story that is as relevant today as it was in Hugo’s time, “The Hunchback of Notre Dame” features abusers, victims, deceit, treachery and hopelessness. However, it also highlights the power of truth and faith and the consequences from helping one another. “Hunchback” tells the story of Frollo, an evil priest who is fraudulent and terribly hypocritical in his own life and his treatment of others, namely that of Quasimodo, the bell ringer. Quasimodo emerges as a brave hero as he fights Frollo’s attempt to purge Paris of the “unholy” gypsies, including the enchanting and similarly victimized Esmerelda.

Josh Richardson (single cast) as the horrid Claude Frollo is magnificent. His depiction of the vile perpetrator is cunning and incredible. Richardson’s powerful vocals and resounding stage presence evokes sheer hatred of Frollo, an incredible indication of his authenticity and skill. His rendition of “Hellfire” will leave audiences alarmingly torn with disgust for Frollo’s obsession as well as utter awe for Richardson’s talent.

Frollo’s charge and victim, Quasimodo, is played by the brilliant James Bounous (Bradley Quinn Lever; Tues., Thurs., Sat. cast). Bounous presents a heart-wrenching portrayal of an abused, yet resilient man. He soars in vocal leads “Out There” and “Heaven’s Light” and seems completely at ease, adapting with stage changes effortlessly as though he truly did live at the “Top of the World.”

Completing the three main leads is Rebecca Burroughs as Esmeralda (Angela Chatelain Avila; Tues., Thurs., Sat.). Admittedly, it seemed to take Burroughs the better part of the first act to assume a consistent lead. Yet, her rendition of “God Help the Outcasts” is potent and demonstrates her strong vocals. She presents enough spunk and sheer grit in her role as the infamous gypsy girl in the second act and is an impressive partner to Bounous.

Preston Yates is deep and believable in his role as Captain Phoebus de Martin (Jack David Shapiro; Tues., Thurs., Sat. cast). He is a solid accompaniment to Burroughs and presents phenomenal vocals.

On an equal level of admirable talent is the ensemble of “Hunchback.” Presenting a strong and collective support, the ensemble is consistent and wildly powerful. Opening the second act with “Entr’Acte,” a piece entirely in Latin, the ensemble is chilling and achieved a beautiful chamber sound as they performed a Catholic Mass music structure. The ensemble continually impresses throughout the entirety of the production.

With strong leads and ensemble aside, the true star of this production is the Centre Stage at Hale Center Theatre. Opening last year with a technologically-advanced stage featuring a center column lift, four quad lifts, two large crescent lifts and two slip stages, the Centre Stage is a prime venue for this adventurous story. “Hunchback” is executed with dramatic and versatile staging. Overhead, the technology continues with two crane trolleys which can lift or lower up to 16 independent performance pieces, traveling the span of the theater — which in this performance, featured the iconic bells of Notre Dame. Utilizing three revolving and moving stage tiers as well as set pieces, Quasimodo’s story comes to life atop of his cathedral.

Sally Dietlein is producer of the musical with Dave Tinney directing and choreographing. Kelly DeHaan is providing musical direction with set designs by Kacey Udy. Costumes are in the hands of Peggy Willis with Krissa Lent overseeing hair and make-up. Joshua Roberts and Kacey Udy supervise light design, while Dan Morgan does the sound design. Michelle Jensen is the properties designer with production assistance from Jamie Sanduk.

It should be noted that Frollo’s abusive treatment of others can be triggering. There is relatively little physical violence actually depicted, but there is,however, a very believable interchange between Frollo and Quasimodo that highlights the sickening relationship between perpetrator and victim.

Hale Center Theatre’s production features over 60 performances of “The Hunchback of Notre Dame” running Feb. 5 – March 31, 2018. Performance times are 7:30 p.m., Monday through Saturday, and matinees Saturdays at 12:30 p.m. and 4:00 p.m. with no performances on February 28. No children under the age of five are permitted in the theater. Ticket prices are $40 for adults and $20 for youth ages five through 17. Additional information can be found at https://hct.org/