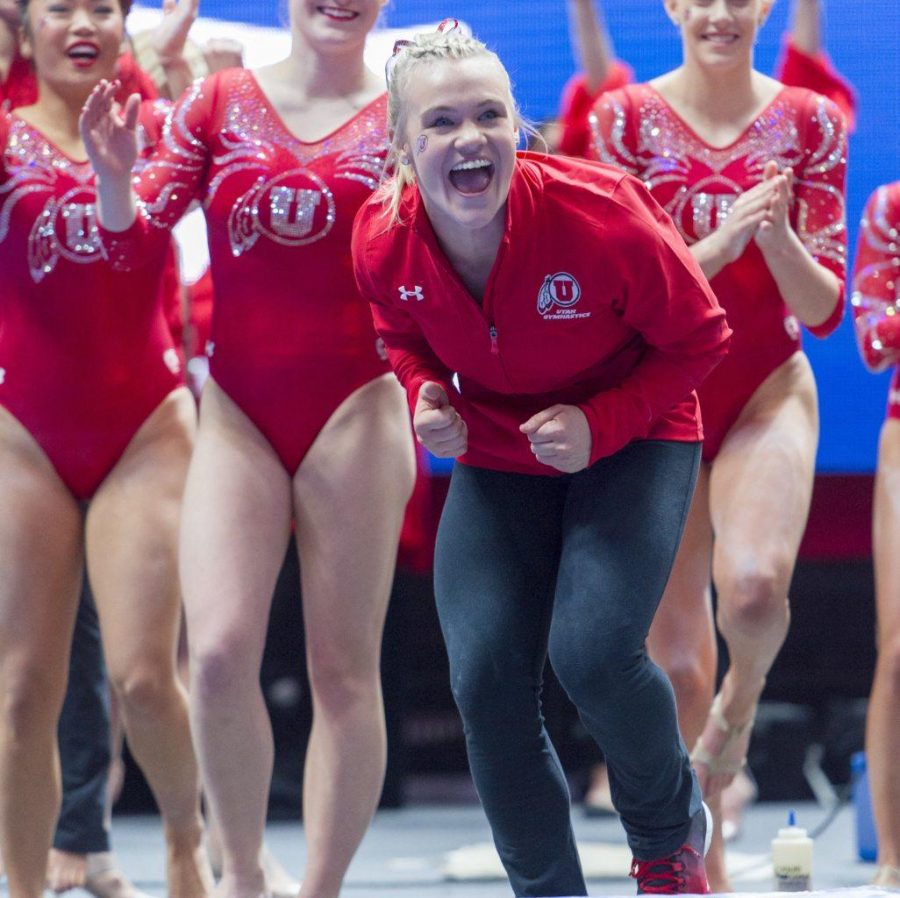 When Erika Muhaw arrived in Utah as a freshman ready to compete for the Red Rocks, she was placed in a role on the team that was different than she imagined.

“I think it’s really important for every young athlete to understand that when you’re going to a top university, you’re not guaranteed to play or compete all the time and I think that it’s important to realize that there are different aspects to it’s a team,” Muhaw said. “It’s a team environment so there are different aspects of it, everyone plays a role whether you’re competing or not competing.”

So far, the sophomore has competed in only six events during her time as a Red Rock. She has hit all of those routines, which included competing in the Pac-12 Championships, regionals and nationals in 2017. She may not be participating every weekend like she had planned or hoped for, but that doesn’t stop Muhaw from being the best teammate she can be or from practicing hard during the week.

“It’s taken a lot to cope with,” she said. ”But it’s kinda like taking a different spin to it and say, ‘Yeah, I’m not helping actually score, but I’m doing it in a different aspect,’ and kind of looking at it that way.”

The impact Muhaw has had on her team and teammates is something vital to a team’s success. Senior Tiffani Lewis describes Muhaw as the person who lights up a room and has a personality people are drawn to. Muhaw is also the first person to help in anyway she can. Lewis laughed when she recalled how Muhaw is always picking on her.

“Although we only have six spots to compete, there are double that on the team and for other teams there are more than that and I think that everyone contributes to our success,” Lewis said. “I depend on Erika to lighten the mood, she really helps me before routines to help motivate me and say a lot of positive words and it reminds me to be confident in myself.”

The journey hasn’t always been easy for Muhaw, who has learned to cope with not being able to contribute to scoring at competitions, but her role on the team happens in other ways.

“I thrive off of what I can contribute to the team and that’s helping the girls perform and their best,” Muhaw said. “I have a very bubbly personality and I know that with me being positive and happy it rubs off on the girls and I enjoy that. So whatever I can bring to the team in that aspect I enjoy that, and I know that it will help them in the long run, keeping the atmosphere light and bubbly.”

In a sport that is both physically and mentally tough, having Muhaw on the sideline is just as important as having the team stick every routine.

“Gymnastics is a really mental sport,” Lewis said. “So when you have a friend like that and a teammate who is always there ready to remind you how amazing you are and how great of a gymnast you are, that goes a long way, especially right before competition.”

Muhaw wouldn’t give up her experience for anything. The lessons it has taught her, the friendships and the 13 sisters she has made and the atmosphere of the Huntsman Center all make her Red Rock experience a dream come true.

“One thing I do say to myself a lot is I’m lucky to be here,” said Muhaw. “I have the opportunity to be with these girls and I just thrive in it. I’m just so privileged to be here.”