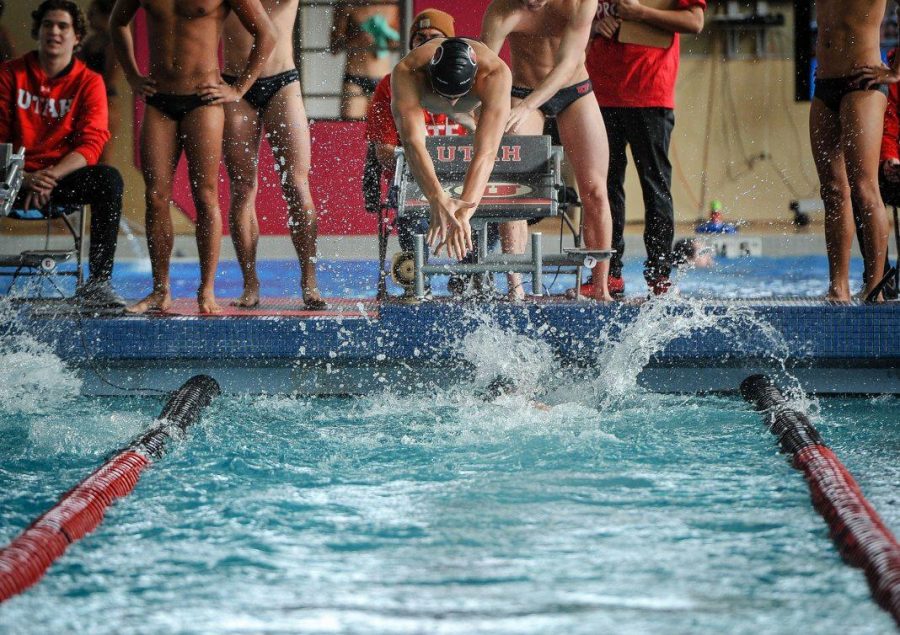 The University of Utah Swimming relay starts there second leg as they take on the Brigham Young University at the Natatorium in Salt Lake City, UT on Saturday, Jan. 27, 2018 (Photo by Adam Fondren | Daily Utah Chronicle)

On senior day, the University of Utah women’s swim and dive team on Saturday beat Washington State by a score of 187-75. Head coach Joe Dykstra was worried that swimming in three consecutive meets against UCLA, BYU and Oregon State would make the team feel race fatigue. However, the Utes came out and dominated the entire meet with the help of the enthusiastic Utah team and crowd.

“Today was all about the seniors. It was their last meet here,” Dykstra said. “We want to recognize all of them, Doriene Butter in particular, she won all three of the races she was in today. Kat Whickham swam her last 1000 freestyle race here, so that was really good.”

Sarah Mclendon, Jenny Robertson, Sarah Lott and Butter won their individual events, as well as the 200 medley and free relays.

Other wins throughout the day included Sarah Lott in the 100 back with a time of 55.31. Jordan Anderson clinched the 400 IM in 4:26.37. Lott also earned a second place finish in the 50 back, while Anderson placed second in the 500 free and third in the 100 fly. Along with the 200 medley relay, Marsh came in second place in the 50 fly and in third place in the 50 free to conclude her final meet as a senior. Another senior that had a successful race was Kat Whickham who placed third in the 1000 free.

For Butter, it was bittersweet racing in her last meet as a senior, but she hopes to continue racing at the competitive level. It was rewarding for Butter to have her teammates constantly push and motivate her in the locker room and on the deck to do her best.

“Today [Saturday] was a really good, positive day. I had some really good races that I executed overall, which is exciting,” Butter said. “I’m finally piecing my technique and race plan together, and it definitely helps to have such positive energy on the pool deck.”

The Utes will now focus on gearing up for the Pac-12 Championships in Federal Way, Washington. The action begins on Wednesday, Feb. 21.