Elizabeth Smart Addresses Coping With Sexual Assault at the U 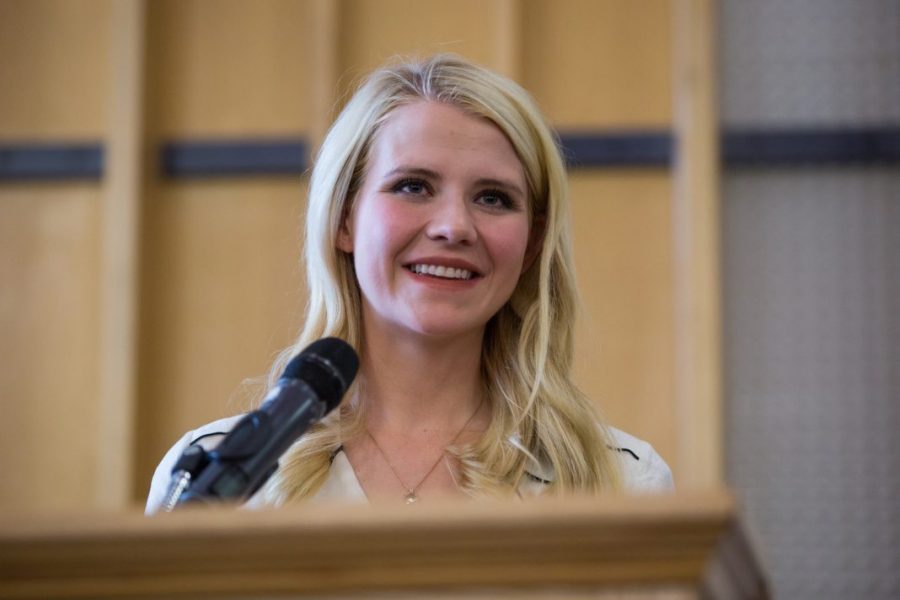 A short walk away from where the nightmare began, Elizabeth Smart detailed her kidnapping, rape and subsequent nine-month-long abduction at the University of Utah on Thursday, Feb. 22.

Smart was taken from her bedroom when she was 14 by Brian David Mitchell and his wife Wanda Barzee. Her message to other survivors of sexual assault reflected the advice given to her by her mother upon returning home: “Have happiness be your end goal no matter what.”

In her speech, Smart advocated for sex education and described how the Sunday school rhetoric she was taught growing up in the Church of Jesus Christ of Latter-day Saints (LDS) condemned sex before marriage contributed to the emotional damage she sustained after being raped.

“Stop drop and roll is not going to help you when someone is trying to rape you,” Smart said. “We should be addressing more.”

Lindsey Ulrich is a senior at the U and member of the LDS church who attended the event. She agreed with Smart’s perspective on sex education.

“I don’t think we should just teach abstinence only,” Ulrich said. “I think we need to teach sexual education and let people do with it what they will.”

Evan Furlong, a senior at the U who also identified himself as the brother of two sexual assault victims, provided his perspective during the Q&A. After the event, he said he lost friends because of his willingness to speak up on the way they were mistreating women.

Associated Students of the University of Utah (ASUU) hosted the event.

“This is one of the most female attended events that I have seen in my term here,” said Claudia Gonzalez, the Campus Events Board director for ASUU.

ASUU felt bringing Smart to campus would be appropriate at a time when women are speaking out against sexual assault with movements like #MeToo.

“I think that women right now are feeling very empowered and we are very grateful for this,” said Hunter Mansfield, the Speakers Chairman for ASUU. “They are standing up against [sexual assault] and someone like Elizabeth really draws that power out in women.”

Hunter, acting upon a suggestion from his mother, is the one who proposed the event to Gonzalez.

According to the National Sexual Violence Resource Center, one in five women and one in 16 men are sexually assaulted while in college, and more than 90 percent of sexual assault victims on college campuses do not report the assault.

The U provides Title IX reporting, advocacy and counseling to victims of rape, sexual assault and domestic abuse through its counseling center. All resources can be found at sexualassault.utah.edu.

“College has the highest statistics for [sexual assault], so I think that what [Smart] was able to offer to students on how to combat it and outlook on life was really impactful and beneficial,” said ASUU’s Speakers Vice-Chairman Cole Perschon.