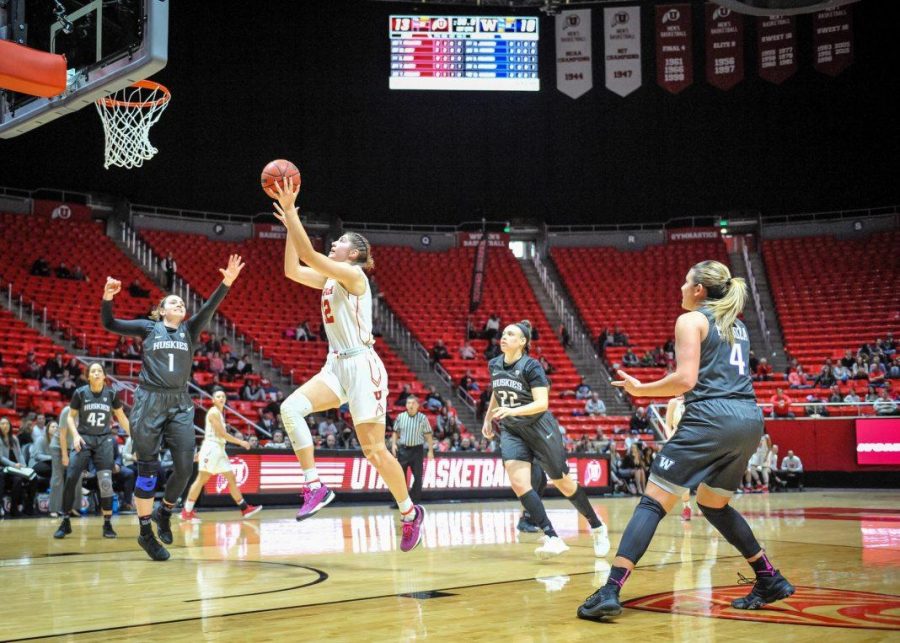 Utah Utes forward Emily Potter (12) takes a first half shot as the Lady Utes take on the Lady Huskies from the University of Washington at the Huntsman Center in Salt Lake City, UT on Sunday, Feb. 18, 2018 (Photo by Adam Fondren | Daily Utah Chronicle)

When I think of my basketball games, I don’t imagine screaming fans and stardom. I only see the lights, my team and my coaches — that’s it. I do not envision the fans because for most of my career at the Univeristy of Utah, there haven’t been that many.

My reality as a Utah women’s basketball player is starkly different than those of my male counterparts, but that doesn’t make my job any less rewarding. I am a student-athlete at an amazing university, and the fans we do have are fiercely loyal and create a great atmosphere for us. Sure, more fans would be great, but it’s not that simple.

Utah women’s basketball has a tradition of being a great program. Currently, the Utes rank No. 18 all-time in NCAA Division I winning percentage coming at .684 and they’re at No. 28 for most wins all-time with 864 victories. Although the team has been around for over 40 years at the U, the games have rarely attracted hoards of fans. Even during former head coach Elaine Elliott’s decorated tenure with numerous postseason appearances and 20-win seasons, the games still did not host large crowds. During the 2005-06 season, arguably the best season for the women’s team, the Utes made the Elite 8 for the first time. The average home attendance, however, hovered around 1,400 fans.

The problem is not with the talent of the team or the wins and losses, but with the fact that it’s a women’s basketball game and not a men’s. The Runnin’ Utes have a great tradition of their own, but comparing the two is like comparing apples to oranges. Even though women’s and men’s basketball is the same sport, they might as well not be because there are so many differences between the two.

A fan of women’s basketball may not appreciate the men’s side of the game and vice versa, but each has its own unique appeal. The men’s game involves playing above the rim, utilizing height and athleticism to throw alley-oops and jam home highlight worthy dunks. Because of men’s strength and bigger body builds, there tend to be more one-on-one plays of athleticism and skill. This style of play is typical of the men’s game, and though women are getting more athletic and some are even starting to dunk, it is still rare. Both men and women play on the same sized court and have the same sized rim, but most men’s basketball players are larger than women, and this size difference doesn’t only allow for as much above-the-rim-play.

Smaller female players mean there is more room for cutting and running offense; that is what shines in the women’s game. When I think about women’s basketball, I think of a fast-paced chess game where opponents expose each other’s weaknesses and score pretty baskets. The women’s game is the ultimate team game, and that is what I love about the sport. However, to the casual men’s basketball fan, it may seem less exciting or too slow if you don’t understand the strategy behind it. I don’t think that’s fair to all the female basketball players out there who are working hard and trying to compete well.

Women’s basketball players show up to practice every day just like the men. We hit the weight room, put in extra time with the coaches on the court and watch film. We are all working our hardest and doing what we love, but at the U, this still means there will be only 1,500 fans at a women’s game as opposed to 12,000 for a men’s home game.

I don’t know the magic solution to improve attendance for women’s sports. The WNBA struggles to reel in fans while the NBA does not, but if you look at Utah, the women’s gymnastics team has no trouble at all in leading the nation in attendance. It’s a tricky situation for all the marketers who work so tirelessly to create a great atmosphere at all our home games, and their hard work is appreciated and every year there are improvements.

The Utah women’s basketball team offers giveaways and contests at almost every single home game and creates different themes to keep the games fun and fresh. From “Star Wars” and “Harry Potter” to blackouts and pink breast cancer awareness games, the women’s basketball team has attempted it all. The hope is that with time, winning seasons and an entertaining experience, fans will get to know the players and continue to come back and fill the Huntsman Center.

The number of girls playing sports will only grow over time, and my wish is that by the time the little girls who are watching right now in the stands become college players, the attendance is equal for both men’s and women’s games. I encourage you to get out and watch a new sport on campus you have never seen before, whether it be men’s or women’s, and keep supporting the Utes.