“Up (The Man in the Flying Chair)” is Smart and Engaging 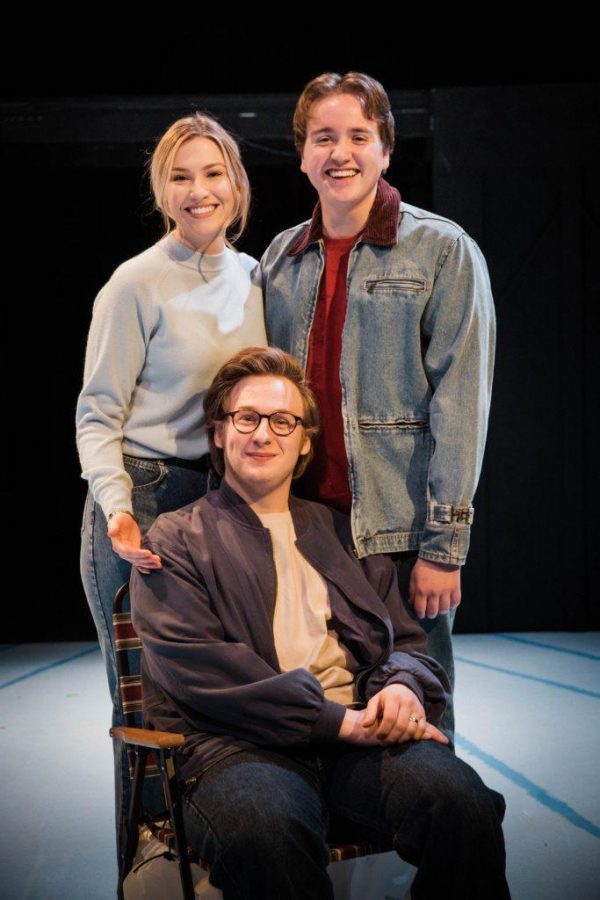 Cast of "Up (The Man in the Flying Chair)"

Loosely based on a true story, Bridget Carpenter’s “Up (The Man in the Flying Chair)” examines the aftermath of an event that on its face feels like a mere tabloid curiosity. In the 1970s, Walter Griffin (Dominic Zappala) watched with awe as Philippe Petit set up a wire between the Twin Towers and crossed the wire multiple times without a safety net. Inspired by Petit’s brashness, Walter rigs a lawn chair with balloons and some questionable homemade controls and floats above his hometown. The stunt won Walter fifteen minutes of fame, but years later, he finds himself unable to escape the shadows of his past. He stays at home trying to concoct a new attention-grabbing invention while his beleaguered wife Helen (Kelsey June Jensen) works a dead-end job as a mail carrier. Meanwhile, the Griffins’ son Mikey (Louis Hillegass IV) forms an unexpected connection with his charming but troubled classmate Maria (Emily Nash). As Mikey slowly withdraws from the family and Walter and Helen realize the depth of their frustrations, the family finds that their relationships are on increasingly shaky ground.

Though few of the play’s developments are fully surprising, “Up” is well constructed, building the main narrative in a way that feels both satisfying and inevitable. Bringing this production to life, director Chris Duval works with a confident fluidity, and his direction is subtle in a way that is easy to underestimate. The staging is unfussy and focused, allowing the script’s gentle humor room to blossom. Duval’s pacing is one of this production’s most valuable qualities, as he reserves space for both rapid-fire dialogue and necessary silences. Mostly, Duval is content to let his vision shine through the actors, who approach the material with an uncommon depth and maturity.

As the show’s central couple, Zappala and Jensen take on challenging parts with depth and grace. The pair displays a surprising naturalism and intimacy, and unlike the stereotypical student actor, they never seem overwhelmed by adult material, such as kids playing dress up in oversized clothes. Zappala engagingly portrays Walter as a paralyzed dreamer, showing the need Walter has to live life on his own terms, even if it is at the detriment of everyone else around him. In Zappala’s hands, Walter’s contradictory and often infuriating behavior reads as understandable, and maybe even perversely noble. As Walter’s wife, Jensen gives a quietly affecting performance — without reaching, she shows both Helen’s affection for her husband and her exasperation at his instability. It’s a role that could easily be thankless and for as long as (usually male) playwrights have examined complicated, tragic men, they have also underdeveloped their long-suffering wives. But both Jensen and Carpenter take Helen’s interiority as seriously as Walter’s — the results enrich the play and challenges the audience to consider complex perspectives.

“Up” uses its premise as a jumping off point to discuss a variety of topics: money and ambition, marriage and sacrifice, hope and honesty. Most centrally, the story draws parallels between the darkness of capitalism and the inherent mythmaking of masculinity, sharing some spiritual DNA with Arthur Miller’s “Death of a Salesman.” Miller’s play, however, has a focus and specificity that gives its tragedy a sharpness that this show sometimes lacks. “Up” can be too busy for its own good, bouncing around between possible thesis statements without ever landing on one decisive point-of-view. Scenes often leap from benign conversation to raw emotion with a rapidness that feels contrived. Part of the blame falls on the cast, but the problem is mostly Carpenter’s, who has so many ideas that her text sometimes turns into a SparkNotes version of itself. Like its protagonist, “Up’s” lofty goals can sometimes work to its detriment. But like its protagonist, “Up” is worth spending time with anyway.