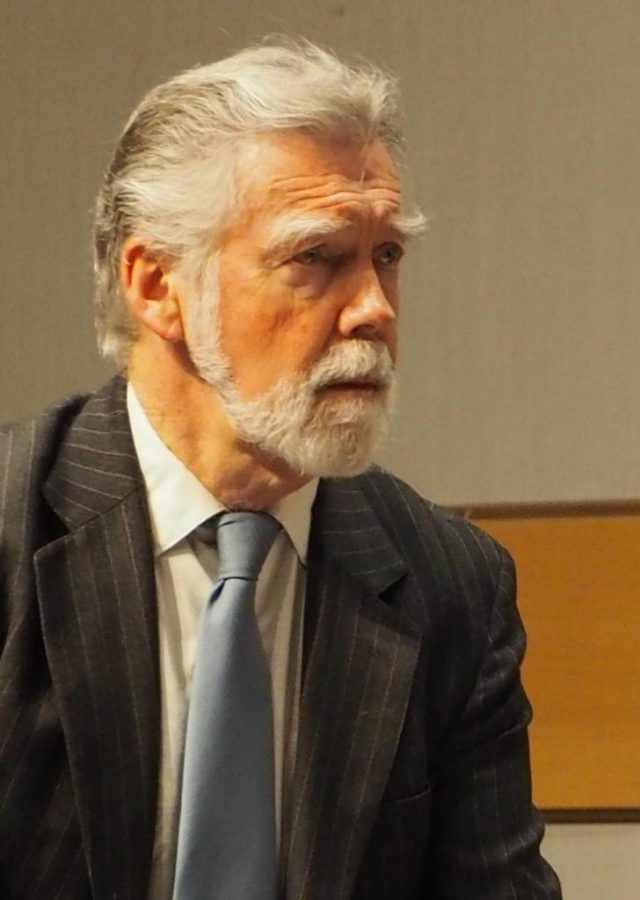 CORRECTION: A typing error dated the Heisenberg-Bohr meeting in 1931. The sentence has been corrected to the proper year of 1941.

Anybody who has taken a chemistry class has most likely heard the name Niels Bohr. He was an atomic physicist known for creating one of the first structural models of the atom. He is famous among scientists, which is why the production of “Copenhagen” is centered around him.

“Copenhagen” was written by Michael Frayn and has won a Pulitzer Prize. This story takes place post-World War II in Copenhagen, Denmark. In 1941, Werner Heisenberg, one of Bohr’s top students, went to visit him in Copenhagen for a private meeting, “and what happened at that meeting has been a topic of discussion ever since,” according to director Beth Bruner. In this play, Bohr and Heisenberg meet in the afterlife and try to work out what exactly they did at that meeting and why they did it. The play is clearly about science, but Bruner thinks it’s more than that.

“It becomes a play about scientific epics and memories and if we know why we do the things we do,” Bruner said.

Frayn also included lots of comedy in the script of the show as well.

Bruner is both directing and producing this play, as well as working with the University of Utah’s physics department. While this play is open for everyone, Bruner wants to see more scientists come to this show rather than the normal theater crowd. Showing the play at the physics department at the U is being done to encourage its target audience, who should be having this discussion, to attend.

Both the male actors, Jesse Peery as Werner Heisenberg and Richard Scharine as Niels Bohr, are part of the U community. Peery is a pre-med student and Scharine is a professor in the theatre department.

The themes woven into this story are relevant in contemporary society, despite being written 20 years ago.

“What it is dealing with about ethics and motivations seems very pertinent to the world today and scientists standing up for what they believe no matter what the government says,” Bruner said. “I think it would spark discussions that would be good for people.”

Not only does it encourage reflection and discussion, but it is a story many people never get to hear. The actors are talented and the story is funny, unique, intricate and fascinating. The last time this story was presented in Utah was 10 years ago at Pioneer Theatre, so this is not a play you will want to miss whether you are interested or involved in science or if you just love theater. Even if you’re just curious you should see the show.

“I hope [the audience] enjoy themselves because I think it is enjoyable,” Bruner said. “Secondly, I’d like people to think about why they make the decisions they make and how little tiny things can affect your whole life.”

The show is not just about science. The discussion about ethics and motivation can resonate with everyone.

“Copenhagen” opens on Thursday, April 12 and will close Saturday, April 21. The show will be held on Thursdays, Fridays and Saturdays at 7 p.m. in the James Fletcher Building, lecture hall 102, at the U. Tickets are $5 for the general public and free for students with their UID. You can pay or show your UID at the door, but there are only so many seats in the lecture hall, so to guarantee a seat email [email protected] for reservations.