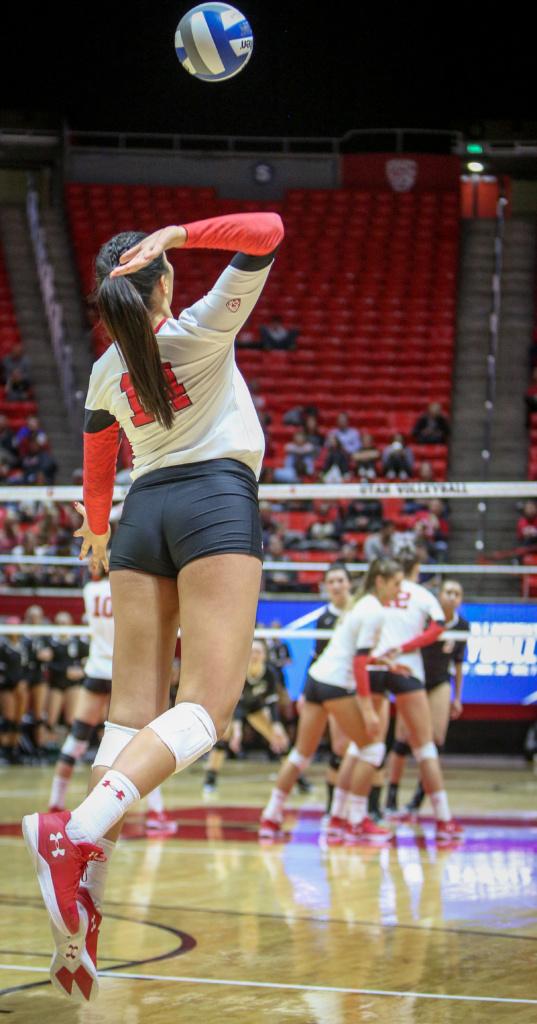 Utah outside hitter Adora Anae (14) serves up the ball during the first round of the NCAA Volleyball Tournament as the University of Utah hosts Cleveland State at the Hunstman Center in Salt Lake on Thursday, Nov. 30, 2017. Utah wins the match 3 sets to none and advances to play Purdue University tomorrow.

The second ever regular season for the University of Utah Beach Volleyball team will wrap up this weekend, as the team travels south to take on four different teams in Arizona.

The Utes are coming off the Long Beach State University tournament where they went 2-3 overall, and those two wins were the Utes’ first wins of the season. The team earned wins against Long Beach City College (4-1) and California State University, Bakersfield (4-1). With the two wins, the team bested its record from last year as it went 1-10.

The team lost two matches, one to ranked Long Beach State (0-5 and 1-4) and the other to Loyola Marymount University (1-4). Adora Anae said the team was able to find its footing against some of the smaller competition.

“I thought as a team we did well,” Anae said. “We kind of just found our way through to get some wins against some of the smaller teams which were Long Beach City College and CSU Bakersfield, and then we played Long Beach State and they were ranked and so I thought we kind of switched our level of play, just kind of easing into it and then going straight into competition. I think we improved overall.”

According to Anae, the coaching staff is helping the team identify the right decisions when blocking and pulling, as well as not making guesses while playing defense.

“Just learning the game and so the movements towards the end of the tournament were more natural and we didn’t have to really think about it and just pursue,” Anae said. “I think we are just going to have to come in with a strong mindset to just play and figure out what to do on the sand and we are going to bring that defensive mentality to this week.”

On Thursday, the team will face No. 16 Grand Canyon University, and on Friday the Utes will play a double-header against Benedictine University at Mesa and No. 14 Arizona. They’ll wrap up competition on Saturday against New Mexico.

Anae believes the team is going to end on a high note by competing against a team it may see in the Pac-12 Tournament — Arizona. In facing this challenge, the Utes will use what they have learned in their previous two tournaments this season before they prepare for the Pac-12 tournament, next weekend.

“This is our third tournament, so it is going to come natural to us and we are going to prepare for the Pac-12 tournament,” Anae said.

After this weekend’s matches, the team will await its placement for the Pac-12 Beach Volleyball Tournament. The tournament will be hosted by the University of Arizona beginning be held April 26-28.